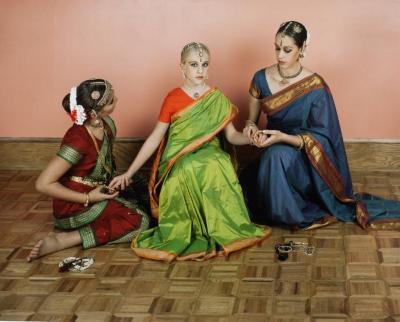 Michael Bühler-Rose, born in New Jersey, lives and works in New York City. He received a Fulbright Fellowship to India, obtained his BFA from the School of the Museum of Fine Arts, Boston and MFA from University of Florida. His work often times falls within two categories: 1. The relationship between the art object and the artist, as a parallel to a venerated deity and a priest, and aesthetic experience as ultimately religious. 2. A dynamic idea of place, through media and art history. More recent work and curated projects have been exhibited at the Museum of Fine Arts, Boston; Indira Gandhi National Centre for the Arts, Delhi; Vogt Gallery, New York; Chatterjee and Lal, Mumbai; Nature Morte, New Delhi; and Carroll and Sons, Boston. His work is held in the Sammlung Goetz, Munich, the Die Photographische Sammlung, Cologne, and the Harvard Fogg Museum.

For Michael Bühler-Rose, working as a conceptual photographer means maintaining an artistic practice alongside another practice of at least equal rigor, reflection, and commitment — as he is a Brahmin priest in the Gaudiya Vaisnava branch of Hinduism. This duality is itself important, as it runs counter to the social and cultural norms of an often-aggressively secular art world, but it is all the more significant because Bühler-Rose’s artwork often queries the parallels between formal structures of religion (priest, church, deity, consecration) and of art-making (artist, museum, object, installation).

The suite of photographs by Bühler-Rose presented in The Light Work Annual speaks broadly to his engagement with religion as a central subject of his work. Visually, they are united as a set in that each photograph appears to be a centralized portrait of an object or element. They do, however, point to two different and simultaneously developing branches of work in Bühler-Rose’s practice. The first is his fashioning of aestheticized, formal images of symbolic objects — represented by the pair of turmeric /  kumkum mounds and of a kusha grass knot in the series Permanent Photos of Temporary Forms. The second is concerned with capturing an elusive, transformational moment of ritualistic action or creating a visual record of a sacred object in use — represented by Camphor Flame on Pedestal and Removing the Evil Eye.

Especially in India, yellow turmeric is renowned for its cleansing properties and auspiciousness, and red kumkum — created by powdering turmeric with slaked lime — is an important component of both temple worship (it is applied to the “third eye” during a visit) and everyday life (many women apply it to their forehead daily as a symbol of marriage). In Hinduism, kusha grass tied in a knot is used in purification rituals. The inherent qualities of these elements are mirrored in the aesthetic purity of Bühler-Rose’s photographs — presenting a single kusha knot or a simple mound of pigment against a flat, monochromatic background of a symbolic color. For a practicing Hindu, these elements can be temporary incarnations of a deity who is not present, extended permanently only in the form of these photographs. Formally, there is no horizon line or clear light source, and conceptually there is no indicator of any external context. Bühler-Rose has isolated these elements from their ritual meaning, essentially rendering them as conceptual abstractions for those viewers who are not simultaneously familiar with their ritual usage and with the artist’s religious commitments. Rather, when looking at the photographs individually as well as in pairs, color defines forms and creates contrasts, and the works in this series are distinguished by their pared down autonomy that allude as much to current conceptual inquiry as to traditional Hindu religious practice.

By contrast, Camphor Flame on Pedestal and Removing the Evil Eye are contingent on the actions of Hindu ritual and on the balance of Bühler-Rose’s qualifications and presence as both priest and artist. A camphor flame symbolizes a deity’s embodiment and transcendence during worship, as it burns clear and leaves little soot or residue afterwards. This work positions such a flame on a pedestal, presenting it not strictly as a sensory experience but as an object with an aura — one that achieves permanence not through its own physicality but through the maker’s photograph and framing. Removing the Evil Eye anticipates a ritual of rotating a burning turmeric-coated coconut around a body to remove an undesirable spirit. Significantly, unlike the other works in this suite, this work shows the artist’s hand holding the object, creating a direct link between the object and its ritual use and context and also reiterating Bühler-Rose’s double position in creating the work. It is also conceptually related to a video work, Removing the Evil Eye from Every Work in My Studio, with the important distinction that in this photograph there is no work or studio from which to remove the evil eye, so that it is self-reflexive. Both photographs are critically dependent not just on sacred context or a conceptual underpinning but directly on the surrounding atmosphere, without which fire could not breathe. In that sense, they demand an integrated and holistic interpretive lens that points to the structural parallels between art and religion and also confronts the presence of Bühler-Rose as both artist and priest in the physical making of the image.

Collectively, this suite of five works —all styled as central objects or images against monochromatic backgrounds — reflects an artist’s refined and rigorous aesthetic, and the subtly drawn perceptual distinctions between formal autonomy and contextual meaning. It shows, moreover, how a core hypothesis and central subject can be transmuted into a range of illusions and divine aspirations through the lens of contemporary conceptual photography.

Beth Citron is assistant curator at the Rubin Museum of Art in New York City.