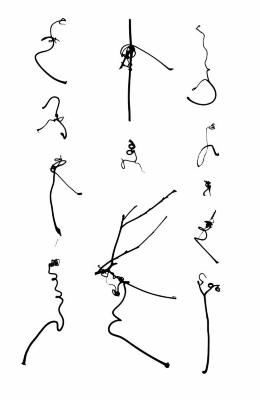 Cui Fei has developed a solid foundation in a wide variety of media, including drawing, painting, sculpture and calligraphy. She has headlined three solo shows, and has participated in over fifty gallery and museum exhibitions worldwide. She has been cited in various publications, including Art in America, The New York Times, and The New Yorker Magazine. She has received grants and awards, including The Pollock-Krasner Foundation Grant, the NYFA Fellowship from New York Foundation for the Arts, the BRIO Award from the Bronx Council on the Arts and was selected into the Artists-in-the-Marketplace program at the Bronx Museum of the Arts.

One of the first insights a Westerner has when learning Tai Chi—the “soft” martial art originating eight hundred years ago in China—is that the 108 movements making up a “set” flow congenially from one to the next. One discovers, for example, how one’s hand simply goes next where it most easily would. Tai Chi shares this trait with Chinese calligraphy: the act of writing itself follows the flow of energy. And like the characters in Chinese calligraphy, Tai Chi’s individual movements form ideograms whose names and appearance—Grasp Bird’s Tail, Parting Wild Horse’s Mane, or Carry Tiger to Mountain—still echo their origins.

Much like breath itself, Cui’s work rises and falls between two and three dimensions. Large wall-hung paper works recall ancient scrolls. Other work is sculptural in itself or its presentation—sheets of paper laid over low platforms or cascading down steps, or written directly on the floor. Photographic processes let some projects flatten the image while others billow with shape and shadow.

In 2010, Syracuse University’s Warehouse Gallery installed five works by Cui, including works made of natural materials (tendrils and twigs on salt, sand images on the floor, thorns tied with twine pinned to the wall) and photographic prints. The show summarized what Cui now distinguishes as her three primary ongoing series projects:2Manuscript of Nature (direct use of materials found in nature), Tracing the Origins (with other processes such as photo, painting, sculptural elements and print-making, a single image may go through several generations), and one of her newer, calendar-based series, Not Yet Titled, which alludes to the Second Sino-Japanese War of 1937–1945 (during which Cui’s home city of Jinan in Shandong province remained under siege).3

After more than fifty exhibitions in the US and China, the Warehouse show was Cui’s first solo museum show. Invited by contemporary art curator Anja Chávez, who saw her work in New York City, Cui also had for the first time a cadre of students to assist in executing site-specific works.4  In May of 2011 Cui returned for a Light Work residency to make photograms, images produced by laying objects—grape tendrils, for example—directly on light-sensitive paper, whose exposure produces a negative shadow. Then Cui makes a contact print directly from the photogram.  “I’ve long been interested in photograms, but didn’t have the facilities in New York,” Cui told me. “I wanted to achieve the effect of ink writing—the gray tones, like a brush stroke.”

In this way, Cui traces photography’s origins too. She began using other media to create the appearance of negatives as early as 1999, in Manuscript of Nature I, by painting over oak leaves, then lifting them from the surface. She has also set twisted copper wire against black-painted brick (Tracing the Origin XV, 2010), and white sand drawings against a dark floor (Tracing the Origin VIII, 2010). Using photograms can allow several generations of images, revealing the gradual detachment and separation that occurs in all abstraction—whether an image from its context or any of us from our natural habitat.

What makes us lean forward when encountering art? Writing about the Warehouse show in YiShu: Journal of Contemporary Chinese Art, Jonathan Goodman observed the “tendency to see the lyrical shapes of thorns and tendrils . . . as verging on the legible.”5 Chávez too notes “this hesitation between the legible and the non-legible.”6 Regarding her quest for enduring form in the midst of modernity’s upheavals, Cui has said, “Nobody can read it, but everyone can recognize it.”7

Cui Fei was a Light Work Artist-in-Residence in May 2011. For more information on Cui and her work, visit her website at www.cuifei.net.