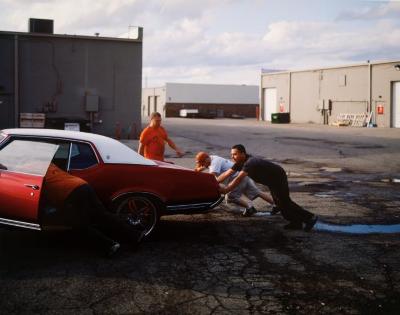 Karolina Karlic is a Los Angeles-based photographer, born in Wroclaw, Poland. Karlic’s work is invested in the representation of American culture, more specifically immigrant emplacement and diasporic existence. In search of the American dream, her family immigrated to Detroit in 1987 when her father fled communist Poland to find work in the U.S. auto industry. As the stock of Ford, General Motors and Daimler Chrysler’s North American operations eventually crumbled, Karlic’s work continues to focus on labor, industry, immigration, outsourcing and their causes of displacement. Karlic is a recipient of the 2011 John Simon Guggenheim Memorial Foundation Fellowship which supports her investigations in diasporic existence surrounding industry and the human condition. She holds a MFA in Photography and Integrated Media from the California Institute of Arts and a BFA in Photography from the Minneapolis College of Art and Design.

In the photographs made and assembled by Karolina Karlic, a series provisionally titled Elementarz (Polish for “primer”), we nearly hear as well as see the discordant strains of humor and sadness, wonder and bewilderment. Mainly stasis pervades each of the carefully composed scenes, yet they seesaw between the New World that looks pathetically past its prime, and the Old World offering weak hopes of rejuvenation. To paraphrase Yeats, the center attracts, reminds, but does not hold.

When not long ago the national economy ground to a halt, America’s car dealerships —  traditional nodes of frantic buying and selling — began to be shuttered, becoming empty monuments to past prosperity. With the resulting reversal of regular jobs in this key industrial sector, Karlic observes that more effort was expended at the individual level buffing up the vintage oldies rather than turning out and selling new models. The pictures this photographer gives us of cars lovingly restored outclass by a mile the housing stock that hovers in the background.

But in another photo, indeed the opening shot in her series, the car strikes back in a manner of speaking: a group of guys strain to roll the antiquated vehicle so that just maybe it can be tarted up with a new engine, wheels, and fresh paint. She calls them Body Shop Boys, but here they look more like draft animals than budding artisans. Not only does Karlic find that exquisitely embarrassing moment when the car resists movement, but also in all of Elementarz we are sent back to basics, wondering if anything built today has legs to endure or even last a few miles. The African American neighbors she befriended during her teens in Detroit probably represent second- or third-generation migrants from the Deep South, another key locale visited in this bi-continental road trip. Karlic turns to them as interpreters of American culture, for she and her family are quite recent immigrants from Poland. Yet beyond her acknowledgment of the guidance provided by these fellow travelers drawn by the promise of modern industry, the hero in this odyssey is her father who has just barely avoided being superannuated in the tumultuous automotive decline of the last three decades. As ambitious immigrant and second-generation engineer, he had for a while made it up the rungs of auto parts production, but once the American economy faces the possibility of extinction, his only surviving option is an assignment to survey cheaper production sites for startup in Poland. Having turned his sights on America more than two decades ago, the elder Karlic not surprisingly finds himself a bit lost “back home” in Poland, as indicated by one emblematic shot of him studying a map for orientation while standing under an ominous thundercloud.

For a host of reasons, this daughter has joined him during part of this mission abroad: first and foremost to provide moral support at a time when he feels bereft of family and financial security; secondly, what else is a photographer to do but document her own second-hand role as location scout? And this isn’t just any exotic place but her own homeland that she barely recalls but has heard so much about, good and bad. Neither father nor daughter reconnect effortlessly to the native land; it offers its own quaint charms — in summer at least the cemetery where forbears are buried looks far better tended to than those in America —  but the urban locales look downright homely, and the factories designated for renovation resemble stage sets long curtained. If neither father nor daughter seems restored by reconnecting to their native land, this journey is another source of bonding. Together they discover a shared sense of being uprooted. Ultimately, they will both return to America, he to Detroit, she finally to California after making a tour of the obsolete museums of car culture in the aftermath of the Crash of ’08.

Ultimately, too, she retitles the series Primer, a concession to her primary American audience, but still a bit stilted with respect for the Polish reader she was given as a school-age child in Detroit, a reader famous among Poles for inaugurating in the early twentieth century the rebirth of an official Polish language after centuries of its censorship by occupying Germans and Russians. It was this education in divided roots that gave the daughter her sense of affinity with other migrants who had made their way to Detroit. Likely too, it was this sense of polarized affinities that made it imperative
to hone the skills of visual scrutiny as an antidote to disorientation. Indirectly, she realizes, it is her father’s ambitious move to heartland America that granted her not only the potential for wry observation but also the photographic genealogy of other highway chroniclers — from Frank and Eggleston to Soth and Strauss — while, in the best American tradition, insisting on her own map, compass, and distinctive point of view.

Sally Stein is retired from the faculty of Art History and Visual Studies, University of California, Irvine, and has written for many years about matters photographic. She lives in Los Angeles.

Karolina Karlic lives in Los Angeles, CA, and completed her residency at Light Work in June 2013.