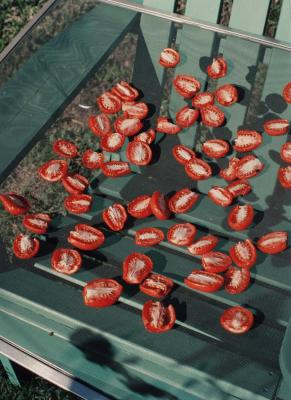 Born in Chicago in 1947, Robert Benjamin lived in France in his twenties before moving to New York, buying a camera, and starting to make photographs. He has lived and worked in Santa Fe, Sarasota, Seattle, and the Colorado Front Range over the past 35 years. He currently lives in Fort Collins, Colorado. “I grew up in small towns in northern Illinois, briefly attending college in the ’60s. After several years living in Paris, I moved to New York City, saw Edward Westons portraits and Atgets gardens and just had to buy a camera. I taught myself what I needed to know to make prints and found I was really only interested in making pictures of everyday life- places, friends and later family. This has never changed. I made prints, put them in boxes, took a lot of Polaroids- showed them on occasion to friends- wasn’t interested in promoting them. In 2010 I agreed to a solo exhibition at the Denver Art Museum, and the following year the DAM and Radius Books published Notes from a Quiet Life, a book of these photographs. I am still making pictures, writing poems, raising a family—and find I totally agree with Robert Frank’s statement… ‘My work is about life, not about Art.’” – Robert Benjamin

Downtown Fort Collins has the feel of an old Western city—classic brick architecture, quaint shop fronts, wide open streets, and plenty of free parking. On a brisk, sunny December morning, Robert Benjamin and I had breakfast at The Silver Grill, where
regulars have a wall dedicated to their coffee mugs and they sell cinnamon buns the size of Colorado. Over food, Robert and I talked
at length about the meaningful role that images have played in his life as a photographer and poet.

Robert grew up in Northern Illinois, spent his twenties traveling across America, eventually to Paris, and then moved to New York City in 1972. When he got to New York, he saw Edward Weston’s Mexican portraits and Eugène Atget’s gardens exhibited in the museums, and the transformative and lyrical potential of images captivated him. As a result, he bought his first camera and started to make pictures. He recalls a particular street photograph by Helen Levitt that clearly shifted his perspective at the time too—
significant, in part, because he recognized its subjects were from his neighborhood. He realized that he also might be able to make pictures that mattered, and this compelled him to dive deeper into a photographic practice.

When he met Pamela in 1982, they fell in love, eventually married, and started a family. Pamela and their two kids, Nellie and Walker, became the primary focus of his frame. Over time, his family became comfortable with the camera and, in a way that felt natural, Robert could slow the fleeting moments of his everyday life into images. Robert finds the interaction that occurs when you photograph someone that you care about necessary to a portrait’s honesty. With an uncomplicated sense of purpose, he explains,“I photographed what I loved. Sometimes you just make pictures that were better than you were and they just make you happy.”

Robert never wanted a career in photography. He simply felt that he needed to make pictures. He eventually made prints, took a lot of Polaroids, put them in boxes, and sometimes shared them with friends. Participating in the art world was always far from his mind. Now 71, Robert has spent nearly fifty years creating photographs, but he still shows them cautiously. He exhibited some of his work here and there over the years, but not often, and with mixed feelings due to his general distaste for the art world’s commercial motives.

So I was grateful for Robert’s openness and trust when I visited him in Fort Collins to put together an exhibition and publication of his life’s work. This, we decided, would be an opportunity to show a broader spectrum of his work. After breakfast that day we began by looking through all the boxes of prints, Polaroids, and negatives stored in his basement. We wanted to shed light on unseen gems, to set aside those images that still resonate for him years later, and to bring those together with his recent work.

To flip through all the photographs in these boxes in just a few days was like watching a film of Robert’s life in fast-forward. Pervading all the images is a palette that comes from a tender sensitivity to color. Robert’s eye for color springs in part from the days of his youth, when he would play hooky from school, taking the train into the city to look at the paintings at the Art Institute of Chicago. Color’s sheer beauty overwhelmed him. He remembers examining the brush strokes of Van Gogh and Matisse, and thinking about how the artists he admired twisted hues around and made their own world with color.

We discovered a particularly striking quartet of portraits that we laid out in a row to appreciate together. Made in each of the four seasons, Pamela is pregnant with their first child in the Spring and cradles the newborn in Summer. The movement of the seasons and this new chapter in their lives are of course present in the suite of pictures, but Robert was thinking about the movement of the colors in the images as well when he made them—the lush greens of Fall, icy blues of Winter. Pamela shares a fondness for color, having explored it in her own work as a painter. She eventually stopped looking at the portraits they made together as pictures of herself, and could see them also as a means to collaborate and explore the magic possibilities of light and color.

From the boxes, Robert and I set aside images that included youthful adventures, family trips, household routines, the kids growing up, moments of domestic quiet—inherent in their making, the photographer aging, the passage of time. We spoke of how images, too, change over time, and what a life of photography really means. “There’s a river that runs through my life,” said Robert. “Now I’m just further downstream.” His exhibition is entitled River Walking, alluding to that flow of time. “It’s interesting how little you change,” he observed. “If you’re true to yourself to begin with and true to yourself now, it’s much the same.”

The refrigerator in Robert’s kitchen is covered in various quotes, which he enjoys thinking about and strives to live by. We took turns reading them aloud one day during a break from going through the boxes. “Love the pitcher less, and the water more” (a Sufi saying). “If you do not change direction, you may end up where you are heading” (Lao-Tzu). “One day I will find the right words, and they will be simple” (Jack Kerouac, a quote I’ve always liked). There’s a copy of Kozan Ichikyo’s Death Poem on the fridge too, which is said to have been written just before the monk put down his calligraphy brush and left the world sitting upright. Much of Robert’s life and values have been informed by a Buddhist practice. He might say this isn’t important for you to know, but I find the way he sees the world mirrors a considered practice of meditation. His images are both at rest and wide awake.

According to Robert, one of the great joys of being a photographer is working with cameras. He appreciates the elegance of mechanical objects deeply—their feel, their smell, their sound. Cameras are “exquisite little machines”—like typewriters, he says. When I discovered that Robert has been writing poems on his Smith-Corona Clipper longer than he’s made photographs, I wasn’t surprised. His poems echo the sensitivity and humble directness of his photographs. More recently, Robert has begun pairing what he aptly calls “small photographs” with “small poems.” This is difficult to do in a way that doesn’t feel didactic or contrived, yet somehow Robert finds pairings that are meant to be.

Robert’s exhibition of photographs and poems spans four decades. Through his work, he considers what it means to live
and to love with intention: “I think you have to love your life, and you have to have the courage to find the world beautiful.” His photographs show us that beauty reveals itself to those that make the time to see it—a reminder to pay attention to our own heartbeat.

It’s often a mystery why a picture captivates us. My own admiration for photography is entwined with this mystery, which has a way of disappearing as soon as one seeks to put a finger on it. A long-time friend of Robert’s, the widely-admired photographer Robert Adams, has written about Robert’s portrait of his son, Walker, in his recent book, Art Can Help. It’s one of my favorite photographs in the exhibition because it possesses everything that embodies Robert’s work—a convergence of time, poetry, color, love, and mystery. Adams writes, “In the distance, the rain is coming our way and the light is about to change. There is, just now, no place on earth exactly like this one.”