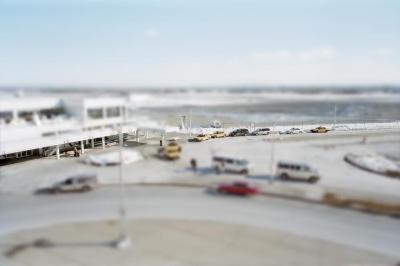 For a more recent CV or bio please visit the artist's website, http://www.rikpinkcombe.com

After an adventurous flight from London and winter-related delays in Washington, DC, our new Artist-in-Residence Rik Pinkcombe has finally arrived. Rik comes to Light Work at the recommendation of Autograph, an association of black photographers in Great Britain. Determined to photograph new work, Rik has been shooting new film in Syracuse daily. His current series touches on issues of perceived vs. staged reality. His large-format images question the common understanding of reality. Rik attended school at Blackpool College of Lancaster University. Trained as a commercial photographer, Rik shifted to art photography after a prolonged battle with leukemia made him reevaluate his life. Rik lives in London. Recent exhibition venues include the Stephen Lawrence Gallery in Greenwich and the 921 Gallery in Hackney, Great Britain.

Rik Pinkcombe’s images are equally alluring as they are complex. It is easy to become mesmerized by the cityscapes while searching for clues if these settings are real. In this work, reality masquerades as a set design. Select areas in crisp focus stand in contrast to the otherwise unnaturally blurry sections. The dramatic shift of focus makes the photographed scenes look more like toy settings. They are irresistible to the eye, yet leave the mind puzzled and unable to accept that the images are photographs of real life. While Pinkcombe’s use of an artificially manipulated depth of field easily captures the attention of passersby, some of the many layers of meaning he weaves into the work may elude the casual viewer. Subtle in their approach, the photographs suggest rather than dictate content.

Pinkcombe has explicitly chosen not to title his photographs or to provide any other identifying information such as the location, city, or date for each image. Without this information the buildings and locations become estranged from the actual sites and turn into symbols of society’s values. The shallow focus further blurs the distinction between the real and the suggested. These photographs of public structures rarely include people, making the images seem lonely and quiet. They are full of markers that guide daily life, such as traffic lights, road signs, and paint on the pavement, but show few traces of living people. When included, the people are either miniscule, looking like game figures on a game board or posed mannequins, or they are reduced to a stream of motion blurs left behind by their car lights. Many of the images were taken at night and usually from a vantage point that suggests an observer rather than a participant in the scene. The camera was positioned above eye level or off to the side, outside the main stream of traffic. The views are broad, taking in whole scenarios rather than close-up views. Pinkcombe’s exploration of identity and identity-forming influences connects these diverse images. His considerations include cultural, national, and ethical influences, and also expand to sports, politics, advertising, religion, consumerism, and media messages that influence the shaping of identity and, consequently, the perception of the world. The images reflect an underlying questioning of how nationality or one’s skin color factor into personality. The exploration of these issues is kept general enough to be universal, though for Pinkcombe as a British photographer of mixed-race background, they ultimately also carry personal meaning.

Many factors govern modern society and thereby influence the identities of its people. In the end the questioning of identity and perception of one’s surroundings becomes a quest for truth. It is an endless circle of being influenced by the world around us and allowing this influence to affect the way we see the world we live in. Pinkcombe does not stage the scenes he photographs, yet as an artist he controls them by choosing the time of day, the extent of his altered range of focus, and unique framing. The images are manipulated in the camera as well as the computer. It seems that to create images that question truth and reality, it becomes necessary to reshape the original settings into a created reality. The artist began working on this series in 2000, but the majority of the images were taken in 2005 in and around Central New York during Pinkcombe’s participation in Light Work’s Artist-in-Residence program and subsequent visit in 2006. His residency was sponsored by Autograph: The Association for Black Photographers in London. The work is presented at large scale in the gallery. The largest image measuring 41 x 51” and thus takes the size of an average window. The artist’s concept of perception and deception is brought to fruition by allowing the identity of the viewer to shape their impression and interpretation of the photographs.

Pinkcombe might argue that while seeing his work, we are seeing it through the filter of everything that we have become and everything that we have previously absorbed. Experience shapes our view of the present, and the audience is invited to find their own unique answers in the work. As recurring elements in the photographs, lines and signage are important in their function to direct behavior, most apparent in traffic signs or the lines in a parking lot. This contemporary view of our society becomes especially meaningful in its depiction of consumerism and the traffic infrastructure created to support our shopping culture. Pinkcombe’s images of American shopping malls concentrates on their huge parking lots from which the mall buildings rise like temples of worship. The parking lots can accommodate thoUnited Statesnds of shoppers, but lie vacant in the photographs. He quietly comments on a society that chooses to move masses of snow to enable a shopping experience undeterred by nature. The complexity of Pinkcombe’s photographs grows with the layering of the many issues he addresses. His mind and photographs move quickly. In the diptych of the sports field at night, sports collide with access. The lit playing field next to the darkened field suggests privilege, but does not resolve who holds the power to determine the privilege to play. An empty lift used by photojournalists on the sidelines gently reminds viewers of the regular presence of reporters and media. A running track becomes a symbol of societal rules. In the series Borderlines, photographed primarily at Niagara Falls, Pinkcombe shifts his attention to the issue of access based on identity or nationality. An international traveler himself, he examines who is allowed to pass through international borders, and what structures have been put in place to control this access.

Many of the Borderlines images, taken in February 2005 in the midst of a typical Central New York winter, are themed around snow, which Pinkcombe describes as his metaphor for the surface of skin, race, and (absence of) skin color. In a pivotal image, two hockey teams face off in an ice-skating rink—one American, the other Canadian, each in color-coded uniforms below the colors of their flags. So far the Borderlines series has only pointed north to Canada. However Pinkcombe also hopes to travel south to examine the border between the United States and Mexico. Pinkcombe has created a unique portrait of Western society. He resists the temptation to create contemporary Robert Frank-like images that pass Eurocentric judgement on America and its people. Instead, Pinkcombe’s British and American images blend together seamlessly in a world unified by globalism and similar cultural influences. Who we are in the face of our society is seen through the structures we have built and the signage we have created to guide us. The photographer emphasizes the controls we have built into daily life, such as traffic lanes, fences, and bridges, and the messages that pour down on us through signs, posters, and billboards. These images of life in the public arena convey a sense of loneliness, and take a somber look at the world we have created, as it has created us, and as we see it.

On the surface, there’s a chilling beauty to Rik Pinkcombe’s photographic series Borderlines.  Shot along the Canada/USA border at Niagara Falls, the opening shots of this sequence are an extremely minimalist vision of white-on-white.  Lingering over the pristine landscape, his camera reveals the translucency and delicacy of snow and ice, tracing the crystalline surface where water meets ice and air.

In Britain, where Pinkcombe lives, freezing temperatures are a rarity, and so snow and icescapes often work to dislocate the image from the place.  Within their formal beauty, snowscapes distort our sense of familiarity, creating a psychological, illusory space with little or no signifiers.  In this sense, the snowscape looks back to the sublime tradition of Romantic landscape artists, such as Caspar David Friedrich, while also maintaining the white minimalism of the contemporary gallery space.

Pinkcombe’s minimal color scheme forms a continuum with the contrived whiteness of the contemporary gallery, but the intensity of his focus also functions to make whiteness visible and thus available for examination and discussion.  White is a paradoxical color, being both the combination of all colors and the perceived absence of color.  Within Western culture, whiteness—as both a color and a social identity—has been normalized to such an extent that we no longer notice or think about it as a construct.  Even in countries such as Canada and the USA, where European people are historically immigrants, ‘whiteness’, as a racial designation, can presume the absence of ethnicity.

Western art has been guilty of a historical complicity in visualizing the inferiority of darkness (black) and superiority of lightness (white), and Pinkcombe records the fissures in his white landscapes as a way of signifying this cultural divide.  He further heightens these divisions by locating his images within a specific landscape—a sublime geographical division that, as well as being one of the world’s most visited tourist destinations, marks out the border territory between two countries.  Almost submerged beneath the weight of whiteness in these photographs, the border becomes a metaphor for the cross-contamination of landscape and vision.

Working from the perspective of a mixed-race artist, Pinkcombe uses the border as a device through which to look at identity, as a process where subjectivities are formed in the spaces between the binaries of us/them, black/white, native/foreigner.  Using digital processes to distort perspective, he creates constructed spaces that look at the artificiality of such borders—places that are neither here nor there and yet have the potential to divide or connect cultures and communities.

Through these distortions and manipulations, Pinkcombe underlines the fragility of our vision.  He uses shifts in focus over specified points along the border to play with perspective and scale, creating a feeling of artificiality and control.  Through both subject matter and technique, Pinkcombe questions notions of truth that are presented in photography, where a subjective view is often presented as objective and therefore believed to be real.  By using the motif of the border, he investigates the points at which the fantasy (the constructed environment) meets the real (the actual experience of the place) in a series of juxtaposed viewpoints.

Exploring the affinities between tourism and the photographic experience he reveals the tourist’s directed gaze and how landscape can be predetermined by our expectations.  Pinkcombe steps back to photograph tourists posing for each other, and his use of multiple imagery and distorted focus (as well as the overlooked industries that surround the idealized territory) deliberately disrupts the touristic cliché.  The resulting work exemplifies how the representation of landscape is episodic—not a moment of frozen space but a continuous and mutative sequence of spaces.

In an increasingly visual age, Borderlines reminds us of how rarely we bother to look beneath the surface of the image.  Pinkcombe documents a slippery location, in which the potential abstraction of the snowscape and the tourists’ gaze is undercut by the politics of the site at the border.  Negotiating both the romanticism and the realism of landscapes to arrive at a distinct photographic lexicon, Pinkcombe looks at how our perceptions are directed and deceived.

Kelly O’Reilly is a writer and curator of the Stephen Lawrence Gallery at the University of Greenwich, London.