Kristine Potter
Topher by the River, 2014 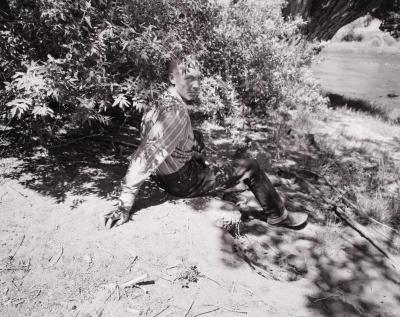 ristine Potter was born in Dallas, Texas. She earned both a BFA in Photography and a BA in Art History at the University of Georgia in 2000. From 2000 – 2003 Kristine lived and worked as a professional printer in Paris, France. In 2005 she earned her MFA in Photography from Yale University. Potter’s work has been exhibited in Paris, New York City, Miami, Atlanta and Raleigh, NC. She is represented by Daniel Cooney Fine Art in New York City, with a forthcoming solo exhibition, Manifest.

Three years ago, after the success of The Gray Line, her portrait series of West Point cadets, Kristine Potter took a trip out West. Texas born, Georgia raised, descended from long line of military men, Potter was seeking to extend her critical exploration of masculine archetypes far from the world she knew. Having generated controversy in her sensitive (read by some as homoerotic) renditions of West Pointers, so out of keeping with stereotypes of the American soldier, Potter was ready for a change. Eventually, she landed in Paonia, Colorado, on the western slope of the Rockies, in her experience just about as far as you can get from anywhere (Paonia, pop. 1,500, is a slow 150 miles southwest of Denver and sometimes inaccessible by road during the winter). There she found a loose community of cowboys, hippies, poets and
counter-cultural types who had, for as many reasons as there were people, settled in this place of relative isolation. Some of the men among them became her subjects, interspersed with studies of the landscape  —   sparse brush and stone-fruit orchards  —  that they inhabit.

Shot in color (mostly 4 × 5 film) in bright sunlight, the negatives scanned and processed digitally, the resulting black-and-white photographs in Manifest seem pushed to the edge of overexposure, their subjects brilliant in descriptive detail. Yet they are oddly unrevealing. No matter how hard we look, we are kept at the surface, our vision hijacked by an almost hysterical luminescence. We can practically count the freckles on Dean’s preternaturally white skin, but we cannot read his expression. He looks high, but the feeling of burn-out arises as much from Potter’s lighting as anything psychological about the man himself. Bleaching the bricks behind Garrett, who raises one hand defensively, his long white hair partially concealing a face lined by time and sun, Potter fashions for this aging hippie a stark backdrop. Although she has “found” these men, she willingly intervenes to heighten their dramas, mute and unknowable. She isolates Pancho Outlaw in a landscape of whitened grasses, thereby exaggerating the outlier status that her title implies. Floodlit in noonday sun, and distinct from his low-key demeanor, the man’s presence is
almost theatrical.

We know American westward expansion coincided with the invention and spread of photography. The great photographic surveys of the 19th century, commissioned by the railroads and U. S. government, were the instrument of that fraught ideology  —  Manifest Destiny  —  to which Potter refers in her series title. Yet in lopping “destiny” off the title, she hints at her project’s deconstructive nature. Eliding that single word speaks to the upended ideal embodied in
the photographs. The landscapes of the nineteenth-century surveys, photographed by Timothy O’Sullivan or William Henry Jackson, among others, represented the pure potential of land ripe for capitalistic development at the hands of deserving Americans. How to poke holes in that ideology (an undertaking other photographers before her such as Robert Adams and Mark Klett also adopted) is the challenge Potter sets for herself.

Potter crafts contracted views. She abhors horizons and vitiates depth of field. She asserts human intervention at every turn. Spraying white paint on leafless branches shot close-up, as in Winter Landscape (spots), she eschews the notion of pristine nature that Ansel Adams and Eliot Porter championed. Paonia is in her photographs the end of the line, a form of destiny for her subjects, a locale in which eternity replaces progressive teleology. There are no long views:
appearance and close surroundings, unnamed and generic, stretch immediacy into future and past alike. No Way In / Out is the title of one image, in which we merely glimpse snow-capped peaks through a screen of Lee Friedlanderesque brambles. The image is a bit of a spoof on the lush vistas and unspoiled nature that Adams offers up to the feasting, uncritical eye.

What is more, the men Potter presents are vivid and solitary. They are singular, unlinked to anyone, at once the embodiment and deflation of the rugged individual. Unlike Larry Clark’s delinquents, Collier Shorr’s wrestlers, or Justine Kurland’s pastoral arcadians, Potter’s Paonians are loners, protagonists in a contemporary narrative of creeping libertarianism and anti government rhetoric. Martha Sandweiss has written that the arid West was, in the late 1860s, a “blank slate upon which Americans could project and inscribe grand narratives of national life, narratives which, in the beginning, inevitably stressed success and growth, never failure and defeat” (in May Castleberry, 1996, 21). Times have changed. Yet, moving beyond even a tale of failure and defeat, Potter seeks the potential for creative renewal within the very materials of photography. Using color to invent a new kind of light, she delivers a black-and-white photography that looks utterly fresh.

Faye Hirsch is director of the MFA program at Purchase College, SUNY, and writes extensively about contemporary art.

Kristine Potter lives in Brooklyn, NY, and completed her residency at Light Work in July, 2014.

For two centuries, the US Military Academy at West Point has graduated a steady flow of roughly a thousand cadets annually. Collectively, these alums and cadets comprise “the long gray line.” Over five years (2005 – 2010), Kristine Potter traveled an hour north to West Point from her New York City home seeking male cadets willing to step away from their rigorous physical and  academic training to sit for her. Large format camera portrait photography is a collaborative, time-intensive process requiring patience of both parties. In the hours spent with each cadet, she tried to understand how transforming a young adolescent into a military officer occurs. Her title, The Gray Line, is metaphorical. “I like nuance and I like the gray areas between polarized ideas,” she explains. “I believe during those four years the cadets are really in between a civilian life and a life of military service. They hover between being kids and adults. They shift from being one to the corps. They learn how to manage violence and how to keep peace. And I couldn’t help but think where they’d be in five years’ time.”

Men on both sides of Potter’s family have served as high-ranking military officers back to the American Revolution. Their portraits hang in her parents’ and grandparents’ homes. Her father, a West Point graduate, served in Vietnam. Potter describes a childhood and family life that honored “patriotism and a very specific kind of trained masculinity.” Perhaps an attempt to more fully understand this culture and her own ongoing interest in male archetypes drew Potter to West Point at the height of the wars in Iraq and Afghanistan.

Two photographers in particular influenced this project. Matthew Brady’s images of Civil War battlefield carnage as well as soldiers in repose reminded her that war photography is not all about the action shot. There is waiting, boredom, exhaustion, camaraderie, and aftermath. Matthew Brady’s camera could not render movement but his images of war’s periphery are no less compelling. She also considered her father’s photographs. A commissioned Army officer (second lieutenant), he kept his Olympus camera in his ammo pouch. His images depict soldiers hunkered down in a dense, engulfing jungle. Intrigued by his photographs’ formal compositions and blurring of foreground and background, Potter began to experiment with collapsing space in her own work. The exhibition includes four of his images, paired with her portraits as a series of diptychs.

Potter photographed the cadets on West Point’s safe and manicured campus in both dress uniforms and camouflage fatigues, simultaneously allowing for a certain sense of foreboding and loss. In one portrait, camo fabric shrouds the head and shoulders of a cadet, a strange pattern of puzzle pieces obscuring his face. The cadet asserts his own individuality by meeting the photographer’s gaze—one eye peeks through the fabric—but allows for his own disappearance into surrounding foliage: a moment of sudden connection as he hovers in the space between exposure and concealment.

Elsewhere, two cadets wrestle, or perhaps embrace, on a hillside. Potter creates what looks like a double exposure, using the sun’s flare to overexpose the shot as light pierces these translucent figures. Their gestures imply both tenderness and violence. Dis-appearing, the cadets act out a very real narrative for the camera. At the moment of death, the earth will begin to reclaim their fallen bodies and, some believe, the light reclaim the spirit. Kristine Potter did not create this work with social activism in mind. But when “weapons of mass destruction” proved a sham, she says these pictures, in a very personal way, became her protest. Setting politics aside, Potter exposes the cadets’ vulnerability, beauty, and humanity, forcing us to acknowledge the human cost of war. Printed at 40 x 50", the exhibition portraits achieve a monumental scale that presents the cadets life size or larger, impossible to dismiss or ignore. Investigating the archetype of the soldier, she reveals her own familiarity, affection and respect for these young men.

Others later profoundly misinterpreted this subtext.  In 2014, BuzzFeed and Gawker published a series of provocative posts about The Gray Line, accusing the work of homo-eroticism and disrespect for West Point. For an artist whose process relies on trust and collaboration, this was painful and disconcerting. In social media’s often hypersexualized world, filtering photographic images through the lens of desire and  assuming a male photographer together created a field day for internet trolls with their homophobic slurs. Eventually Hyperallergic presented a more rational discussion of the project, but Potter remains protective of this work and cautious about its presentation. In the last photograph offered here, two cadets walk away from the camera. Just  before disappearing into some woods, one glances over his shoulder toward the photographer as both seem to acknowledge the enormous risk in the life he has chosen.