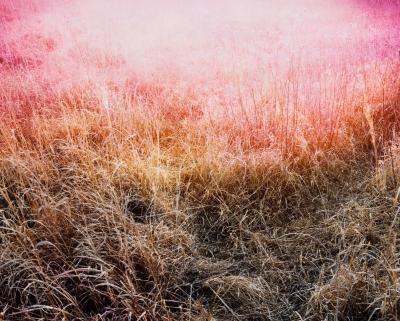 May Artist-in-Residence Christian Patterson has been working diligently on a book dummy for his latest project since his arrival. The series Out There is based on the true crime story of 19-year-old Charles Starkweather and 14-year-old Caril Ann Fugate, who murdered ten people, including Fugate’s family, during a week-long killing spree across the state of Nebraska in 1958. Out There was made during several road trips following the path of Starkweather and Fugate, from their hometown of Lincoln, Nebraska to the point of their capture in Douglas, Wyoming. The resulting images include significant places and things from their story, and other discoveries made along the way. Accompanying the photographs are documents and artifacts that belonged to the killers and their victims, including a poem, a list of dirty jokes, a confession letter, a stuffed animal and a photo booth portrait. The book Patterson is constructing for Out There, tentatively titled Redheaded Peckerwood, features facsimiles of these artifacts that the artist has painstakingly re-created down to the aged look of the paper, where appropriate. The project is part road trip, part time machine, and mostly a testament to the thin line between fame and infamy, truth and representation.

Patterson is based in Brooklyn, New York. His work is in numerous public and private collections and has been featured in exhibitions in France, Japan, Germany, Italy, Mexico, Switzerland, and the United States. Patterson has been nominated for the 2007 Santa Fe Prize for Photography, the 2008 New York Photo Awards Best Fine Art Series, and the 2009 Baum Award for Emerging American Photographers. His first monograph, Sound Affects, was published in 2008. Patterson is represented by Rose Gallery in Los Angeles and Robert Morat in Hamburg.

Christian Patterson’s Redheaded Peckerwood is a photographic meditation on Charlie Starkweather and Caril Ann Fugate, who hit the road in 1958 and over the course of three days drove from Lincoln, NE, to Douglas, WY, killing eleven people along the way. The story was a sensation, and it occupied front pages for weeks after the couple’s capture. Starkweather emulated James Dean in his personal style, so their actions were seen as a manifestation, however extreme, of teenage unrest. Class rage, maybe more pertinent, went largely unmentioned. The story touched a national nerve, and it has continued to stick in the gullet of American culture, as witness Bruce Springsteen’s song Nebraska, Terrence Malick’s film Badlands, and Raymond Pettibon’s cover illustration for the Sonic Youth album Goo, to name just three of the many evocations over the past half-century.

Patterson comes at this highly charged material as a poet and a gumshoe, employing tools from every part of the photographic arsenal. He followed Starkweather and Fugate’s trail, visiting all the places where they stopped, rooting through civic archives and newspaper morgues, seeking out material survivals of their lives and actions. The five photographs included here are representative of the project; they comprise an actual setting, an actual artifact, two symbolic landscapes, and an allegorical object. Patterson takes, combines, and arranges many different sorts of images—primarily original photographs—but in the complete work also includes archival photos and documents of various sorts, achieving a book-length montage that presents a cycloramic view of the story and its people, places, and things.

In many ways the assemblage resembles the accumulation of data that accompanies a crime scene investigation, which usually includes many seemingly random, oddly contingent bits of documentation. Look at that ragged stuffed animal: It is the very one that Starkweather stole for Fugate. Patterson found it in the remains of a house where the two camped out after killing its owner, a family friend. Had it been found by investigators, it might well have been added to the exhibits at the trial, since the clerk from whom it was stolen was Starkweather’s first victim. Here it assumes its authority without any
need for a caption. Its grimy poignancy tells us all we need to know.

Murder charges everything that it touches. Every blurred photo, scrap of writing, wadded rag, and broken comb—things you would never look at twice in any other context—takes on immanence from its association with violent death. That house at night is actually the one across the street from Fugate’s family home (hers was torn down years ago to make way for a supermarket). It may look ominous and even bereft of context, but the association, however once-removed, effortlessly persuades anyone’s imagination to see it as a murder site. The telephone is a model that dates from at least a decade after the events, but the tangle of wires, the bruised wall, the wooden stand intended for some older apparatus, all manage to make it look like evidence.

Those isolated items are contrasted with radioactive pictures of landscapes and skies, from austere to apocalyptic. The images Landscape on Fire and Prairie Grass Leak both project torment onto nature the way the possessed mind does. The contrast forces the eye into a dance of rapid refocusing, as the pages alternate between surface and depth, while another sort of surface-depth dialogue appears in the way the pictures of objects relate to the landscapes, one seeming to comment on the other, as if mimicking the distribution of labor between illustration and text. It is as though the skies and the grasslands of the Midwest contained somewhere within their depths answers to all the troubling questions, while all the other photos were appended as if they were trial exhibits.

What makes Patterson’s project especially remarkable is his ability to keep both feet on the ground even while his lyrical speculation brushes the metaphysical. He is working out something that has not been done much before, if ever, a kind of subjective documentary photography of the historical past. This requires that the individual pictures be true, as close as possible to the physical details of the story, while the accumulation of them is charged with thrusting us into its emotional center, in a way you could call novelistic. And while each individual photograph pulses, sometimes alarmingly, all by itself, the emotional meaning of the whole only coheres when all of its parts and all the subliminal connections between them have been fully absorbed. Redheaded Peckerwood, which unerringly walks the fine line between fiction and nonfiction, is a disturbingly beautiful narrative about unfathomable violence and its place on the land.

Christian Patterson participated in the Light Work Artist-in-Residence Program in May 2010. Redheaded Peckerwood will be published by MACK Books in 2011. For more information on Patterson, visit www.christianpatterson.com.