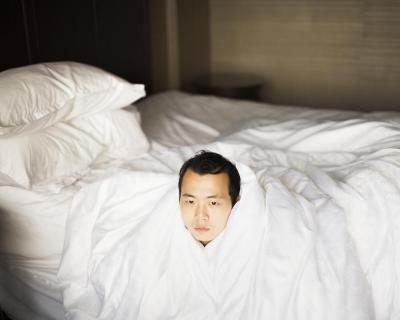 Tommy Kha is a photographer from Memphis, Tennessee currently living in Brooklyn and works between NYC and Memphis. Through biographical and cultural contexts, Kha’s photographs explore the conventions of the Self-Portrait, revealing the discontinuities between self, image, and representation. He is a recipient of the Jessie and Dolph Smith Emeritus Award and former artist-in-residence at the Center for Photography at Woodstock. Recent exhibitions include Kunstverein Wolfsburg, Wolfsburg, Germany; Dorsky Museum, New Paltz, NY; Museum of Contemporary Art, Atlanta, GA; and Aperture Gallery and Signal Gallery in New York, NY. Kha holds an MFA in Photography from Yale University and a BFA from Memphis College of Art.

Tommy Kha is an interloper. Kha, who appears throughout the various media of his body of work, rarely looks suited to his surroundings. At times the artist appears out of proportion, his diminutive figure distorted by comparison with the male figures with whom he casts himself. In other instances, Kha is a fragmented whole, his body nearly eclipsed by his environment, popping up like a glitch that unsettles the scene. If, as Sontag says, the camera makes us tourists in other people’s reality, Kha’s staged scenarios present the artist’s own alienation as their primary subject. He is a tourist in the tradition of Swift’s Gulliver, forever at odds with local custom and code.

Based in New York, the artist makes frequent trips to his hometown of Memphis, Tennessee—a city replete with the Southern nostalgia familiar to viewers of Eggleston, Withers and Christenberry—but continues to be plagued by its darker history of racism. Even at home, Kha can’t pass for a local.In Signal Fire, Memphis, Tennessee (2014),  he poses with his mother in her Memphis home. Both gazes meet ours, while the camera—seemingly operated by his mother, who stands in the middle distance—fixes its shallow depth of field on the sofa, with its oblique orientation dominating the frame. The scene is carefully staged, and the soft-focused subjects convey less information than the furniture. To the left of the couch, lace curtains frame the picture—a clothesline clip juts out in a self-referential nod to the staged process. To the right is a brass-shelving unit redolent of a shrine.

By transferring authorship to his mother, Kha performs an ambiguous gesture of filial piety. His expression is assertively uncommunicative, a trademark deadpan that characterizes his self-portraiture. Kha’s face never registers the specificity of the situation, and remains unchanged in solitude as it is in the company of others. Playing off the ugly stereotype of the “inscrutable Asian,” Kha deflects through a comical over-identification. As if in response to the threat of invisibility—or, perhaps worse, the threat of being over-determined by ethnicity or sexuality—Kha effaces his own body, appearing in a number of his photographs as a floating head. His peeking face disrupts what would otherwise be a perfectly good landscape in Iceland, Þjóðvegur 1 (Route 1), Iceland (2014). Here, as in Signal Fire, the camera refuses to track Kha’s image, as he hides just beyond the depth of focus.

Perhaps the interloper wishes to escape the frame altogether. However, through mimetic desire, Kha’s presence persists in the form of surrogates. Another floating head, that of his grandfather’s portrait, is configured within an apparatus of male inheritance, a still life that operates on a completely different photographic register than the images of the women in his family. Unity, Memphis, Tennessee (2013) is a classic trompe l’oeil of the artist’s sister, inert, facedown upon the image of her own idealized doppelgänger. It’s as though the woman in the photograph has absorbed all affect from the living body she mirrors, and the disparity in this relationship is devastating. By taking himself out of the frame in these works, Kha lets people and objects stand in as the melancholic gap between idealized and realized self-identities.

Perhaps another layer of Kha’s Zelig-like mode is apparent in the eclecticism of his output, which incorporates myriad styles of image making: the family album, the still life, the landscape and the studio portrait. Through self-representation and appropriation of various genres, the artist moves in and out of formats just as he endlessly repositions himself and others within the frame. He evinces little commitment to seriality despite the persistent repetition of his enigmatic image. The absence of clear sequencing and unified style on the one hand, and the estrangement of each scenario by the unchanging, deadpan face of the ever-present artist, on the other, comprise the filters through which to read the world he depicts. We are left to tarry with the disconnect between the settings in which Kha places himself and the dark humor, the tragedy of his body’s refusal to inhabit the space that it occupies. In refusing to perform, Kha’s image becomes at once anti-portrait and anti-performance.