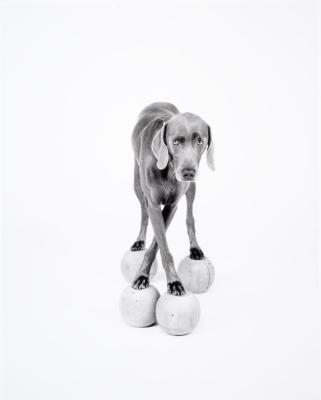 William Wegman has gained international recognition for his works in photography, painting, drawing, and video. Since the 1970s, he has created photographic compositions involving dogs, primarily his own Weimaraners, in various costumes and poses. A conceptual humorist, Wegman has been aptly named a “master of whimsy.”

Light Work is pleased to announce the Urban Video Project‘s collaboration with the Everson Museum of Art to realize a new video piece by artist William Wegman.

The video, “Flo Flow” (2011), is Wegman’s latest in a long line of human-canid collaborations. It was while he was in Long Beach in the 1970′s that Wegman got his dog, Man Ray, with whom he began a fruitful collaboration of many years. Man Ray, known in the art world and beyond for his endearing deadpan presence, became a central figure in Wegman’s photographs and videotapes. Ever since, Weimaraner-actors have peopled Wegman’s uncanny imaginative universe, a reflection on both the human-ness of ‘animals’ and the strangeness of humans.