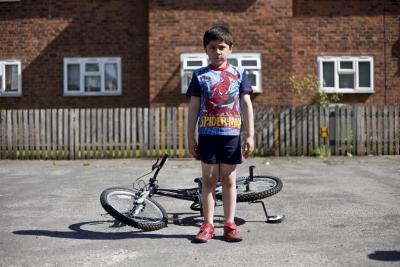 For a more recent CV or bio please visit the artist's website, http://www.mahtabhussain.com/

This residency was co-sponsored by Autograph ABP in London, England, a collaboration since 1996.

Some time ago, I was returning from a summer overseas in the UK. It was 1987 and I was twenty-eight. I had avoided the recent tension and strife. Areas like Brixton, Toxteth and Tottenham had literally burned, but now the entire country had returned to a relative, yet guarded calm. Even so, at least once or twice I had experienced worrying stares as I explored Leeds-near-Maidstone, the small village I was staying in, and I often felt perplexed when I’d see bias, if not outright racism, toward non-Whites in the capitol.

As our plane began its climb across the Atlantic, I struck up a conversation with the young man seated next to me. In minutes, we had talked about everything. He had lived in Leeds, but in the North, and I had lived in Leeds in the Southeast. We talked about cars, like his father’s Jaguar, and how fast we could drive. We remarked that we were both Americans, though he had been in the UK since infancy. Despite having lived there most of his life, his friends could tell he wasn’t born there.

“They just know,” he said. “They give me a lot of stick.” He continued to talk a bit more about his friends. “Some of my closest mates are black,” he told me, almost as if he wanted to prove to me just how cosmopolitan he was at eighteen. “But I hate those fucking Pakis,” he said without warning. “They come to this country,” said the émigré, “and they only want to live off the dole.  They own all the corner shops…they smell and...” I had stopped him mid-sentence, protesting that he just wasn’t right. Shortly afterwards he fell silent. Our conversation was over.

Looking at Mahtab Hussain’s powerful and evocative series, You Get Me?, I was reminded of that conversation, now nearly thirty years ago. Amid the most recent climate of Islamophobia in the UK, his topic is as timely today as then. A British-born artist heavily influenced by multiculturalism and cultural diversity, Hussain’s work centers on identity and displacement. You Get Me? focuses on the changing identity of young, working-class South Asian men in contemporary Britain. With a burgeoning population of 2.7 million, Muslims have been an integral part of the UK since the 1950s. Nevertheless, an increasing number—particularly young men—often feel like outsiders. They experience high unemployment rates, workplace discrimination and racism on the street as they struggle to develop a sense of self. Yet these men strongly identify with England and have a strong sense of Britishness.

Photographed over six years, each image in You Get Me? is an visual impression of contemporary Britain. His photograph, Friends, curry sauce n’ chips, is a powerful statement to camaraderie. Two men eat silently, side-by-side, sharing a meal of burgers and chips. One wears a shalwar kameez, a Pakistani traditional dress, with his red, rolled-up jeans and trainers, while the other is simply wearing blue jeans, a maroon vest and a hoodie. But it may be the men’s implicit sense of agency that Hussain’s photograph celebrates.

Hussain’s quiet but compelling image, Young boy, white boxing gloves, captures masculinity at a confident but vulnerable age. A teenage boxer stands in a corner of a ring. His arms are resting on the ropes while he stares unapologetically at the camera. But he’s not aggressive. His expression appears calm and focused with a hint of vulnerability. He is a boxer but in body and soul he still is a boy. Since Prince Naseem Hamed, another British Asian Muslim, started boxing in the 90s, the popular sport has been seen as a “way out.” Even if the boy never advances into professional ranks, his level of confidence has been permanently altered, imparting much of the real strength of Hussain’s portrait.

You Get Me? perfectly showcases the artist’s approach to contemporary portraiture. For Hussain, the undertaking of a photographic portrait is a complex one, in its unique relationship between artist, sitter and spectator. This three-way triangle, this goal to create a likeness, a representation, or a sitter’s real essence, necessitates at the very least an intrinsic collaboration. It requires the artist to encourage the sitter to open up to the camera in a singular way. It requires the spectator to look with a willingness to discover. The strength of this accomplished work, however, lies in the sitter.

Hussain empowers his sitters and validates their right to be viewed as complex individuals, rather than strictly as product of their cultural background and circumstances. Religion and culture may be what unites them, but those criteria do not necessarily define them.

Charles Guice is a curator, gallerist and writer living in Woodstock, NY. www.convergingperspectives.org

Mahtab Hussain lives in London, UK, and completed his residency at Light Work in March 2015. www.mahtabhussain.com