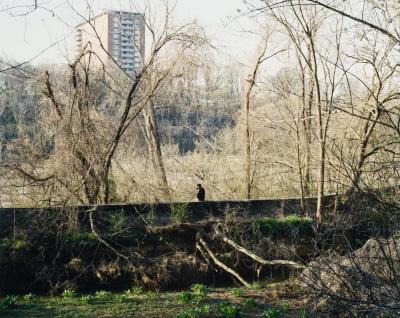 Stanley Wolukau-Wanambwa is a photographer, writer, and editor of The Great Leap Sideways. He has a BA in Philosophy & French from Oxford University, UK and an MFA in Photography from Virginia Commonwealth University. He has contributed essays to catalogues and monographs by Vanessa Winship, George Georgiou, and Paul Graham. His photographic work addresses questions of patriarchy, race, history, and identity.

For those of us who dwell, partly or wholly, in the exile of images, it may seem as if a prime task of the twenty-first century thus far has been to make sense of the twentieth: to pick over its bones; to go slowly through and over what happened so fast; to discover small indications of our own becoming amid the remnants of banality and carnage and affection. We sift that “pile of fragments of private images, against the creased background of massacres and coronations” that the writer Italo Calvino concluded was “true, total photography.”

It is a past now available in abundance (all those online archives) but it is its mysteries that pile up, refusing to add up. And even when we are not searching with conscious intent, the mystery somehow drifts into view to filter and refract our new images as never before.

Photography, mute and immobile, was once the great consort of progress, the messenger bringing ever-newer news of things and events great and small. Today you could be forgiven for concluding that it amounts to a mausoleum of modernity. And those who do dwell in the exile of images are compelled to visit that mausoleum. We stand at its unfinished, abandoned doorway (or maybe it is we who are unfinished and abandoned?). The wind howls and sometimes images seem to blow out into the present. When we are brave we reach in, groping for visions to be read like runes.

All images are excessive and enigmatic. That is their essential condition. For reasons both technical and social, photography was responsible for a quantum intensification of this essence. The camera always captured more than anyone wanted, more than anyone could be held responsible for. Of course, it rarely seemed that way. As soon as photography had been invented steps were taken to contain its wildness: the explanatory and reassuring caption, the instructive sequence, the album, the forced laws of genre. But none of these containments hold fast forever. Eventually a photograph works itself loose and even the simplest, most functional document will burst wide open.

A picture of John Wayne transmutes into a chance encounter or a lucid dream, in which a man becomes an actor becomes a model becomes a two-piece suit becomes an image, only to fall backwards through a hall of mirrors and memory, fragile and vulnerable. Awkward, flesh and blood, uncomfortable with the straitjacket of convention. He’s a misfit and so is the image that transports him.

Indeed, while Stanley Wolukau-Wanambwa has redeemed these image-people and given them new life, new light, they all have the endearing demeanor of lost souls. Orphans plucked from obscurity bearing urgent news in languages we can hardly decipher but easily misread. Perhaps even they themselves no longer quite know what it was they wished to communicate. So let us be careful not to put words in their mouths. Instead, let us see if they put words in ours.

David Campany is a writer, curator and artist living in London, UK. He has published several books and essays on photography, cinema and art. www.davidcampany.com

Stanley Wolukau-Wanambwa is a photographer and writer based in New York, NY, who completed his residency in May 2015.  www.kaubwa.com