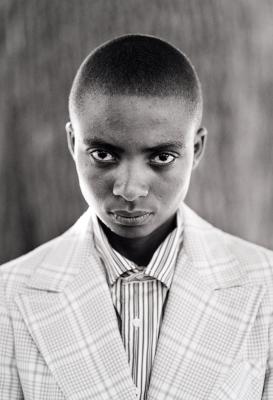 For a more recent CV or bio please visit the artist's website, https://inkanyiso.org/

Zanele Muholi was born in Umlazi, Durban, and currently lives in Johannesburg, South Africa. She co-founded the Forum for Empowerment of Women (FEW) in 2002. Muholi founded Inkanyiso (www.inkanyiso.org), a forum for queer and visual activist media in 2009. Muholi’s self-proclaimed mission is ‘to re-write a black queer and trans visual history of South Africa for the world to know of our resistance and existence at the height of hate crimes in SA and beyond’. Muholi studied Advanced Photography at the Market Photo Workshop in Newtown, Johannesburg; and completed an MFA in Documentary Media at Ryerson University, Toronto in 2009. She has won numerous awards including the Ryerson Alumni Achievement Award, 2015; the Fine Prize for an emerging artist at the 2013 Carnegie International; a Prince Claus Award, 2013; the Index on Censorship – Freedom of Expression art award, 2013; and the Casa Africa award for best female photographer and a Fondation Blachère award at Les Rencontres de Bamako biennial of African photography, 2009. Her Faces and Phases series has been shown at Documenta 13, the South African Pavilion at the 55th Venice Biennale, the 29th São Paulo Biennale, among others. She was shortlisted for the 2015 Deutsche Börse Photography Prize for her publication Faces and Phases: 2006-14 (Steidl/The Walther Collection). Muholi is an Honorary Professor of the University of the Arts, Bremen.

People who have entered our living room have not stopped complimenting my portrait since it was hung in 2011. My cousin visited recently and was so impressed she pleaded to have her portrait taken. I explained that I was not the photographer, that Zanele Muholi produced it as part of the Faces and Phases project. Not that I’m amazed by her reaction. I too was bowled over the first time I saw Muholi’s F&P work in 2010, after being photographed as a participant. Even though my cousin is not an art collector, curator, or critic, and does not use language such as composition and aesthetic, she is still able to appreciate the work, and highlight the quality of its composition and aesthetic. I can’t help but be proud of Muholi, who is able to use the language of photography to produce work that appeals to large audiences from different walks of life.

The South African (SA) photographer was born in KwaZulu-Natal and grew up in Umlazi Township, before relocating to Johannesburg after high school, before the advent of democracy in 1994. The passing of 25-year-old Busi Sigasa in 2007, months after Muholi had captured her portrait, that set Muholi on this path, which shares an anniversary with same sex marriage. This series continues to tour different countries and cities. It has taken time for audiences to embrace Muholi, once labelled a “controversial lesbian artist,” but that did not discourage her from capturing the visual histories of black LGBT people and preaching the importance of self-representation.

The award winning Faces and Phases produced its second, and thicker, edition in late 2014. The photo book features more than 250 portraits of black lesbian and transgender individuals from SA and beyond. It includes Busi Sigasa’s poem titled “Remember me when I’m gone,” who contracted her fatal illness through a “corrective rape.” Many others also submitted poems and life stories reflecting pain, homophobic experiences, hate crimes success and joys in life. Muholi has played a big role in documenting the LGBTI community with visual projects such as Brave Beauties, Mo(u)rning, Being, ZaVa and Beulah.

Many Black South Africans spent the first three days of 2016 exposing racist social media posts and making them viral. White people, who complained about too much black skin on the beaches of KwaZulu-Natal on New Year’s Day, created these social media posts. Racism in South Africa and many other parts of the world propelled Muholi to start working on her latest exhibited series, Somnyama Ngonyama (Hail the Dark Lioness).

She says the body of work is “an artist’s response to racism.” Using her natural skin, Muholi is able to produce images full of melanin by increasing the contrast in Photoshop. Muholi notes that in this series she uses her body as the material and tackles issues of race, colonialism and gender. These self-portraits reveals that Muholi’s creative juices are overflowing. This relentless human rights defender has set a personal challenge to produce 365 Somnyama portraits to represent a year, while each photo refers to a specific historical event.

Paris, Oslo, Rome, New York City, Liverpool, Botswana, Sweden, and Syracuse (during the Light Work Artist-in-Residency), are some of the places were Muholi produced astounding portraits. The props used are mostly inexpensive and are recycled or recyclable products. This reflects Muholi’s popular statement, especially to upcoming and young photographers, that “photography is possible.” One of my favorites is Bester I, Mayotte, 2015. Muholi used clothespins on her head and ears and tied a doormat around her body. Bester is the only portrait not named in the activist’s native language, but named after her late mother, who was a domestic worker.

Thulani I, Paris, 2014 and Thulani II, Parktown, 2015 also strike a chord with me. Her eyes are wide open, like a lioness; she seems fierce, yet calm. These portraits refer to an event that saw the black body dehumanised during the 2012 Marikana Massacre, when miners were shot dead in South Africa. Sometimes covered, other times hanging casually around her head, or tied on her chin, for Zibuyile I, Syracuse, 2015 Muholi chose to twist her long black dreadlocks in a circle above her head, to resemble bull horns. While making this portrait, she managed to capture a sparkle, on the bottom of her right eye, bringing innocence into the image, which addresses issues of Lobola (Dowry) and its implications for the girl child.

Activist, artist, mentor, community builder, or lover of collectivism, Muholi wears these hats with a passion and vigor, while many watch, awe-struck.

Lerato Dumse is a journalist and entrepreneur living in Johannesburg, South Africa. www.inkanyiso.org