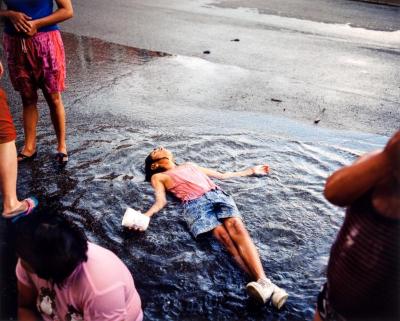 For a more recent CV or bio please visit the artist's website, pauldamato.com/

Paul D’Amato was raised in Boston during the civil rights movement, which shaped his interest in making work about class, community and the simple drama of everyday life. After completing his MFA at Yale University, he moved to Chicago, and in 1988 began to photograph the Mexican communities on the south side of the city in the Pilsen neighborhood. D’Amato’s photographs are immersive and sensitive; the relationships he built over the years are immediately apparent in the uninhibited expressions of his subjects. “Kids finding a way to cool down during a hot summer in a neighborhood composed completely of bricks, asphalt, and concrete is common,” explains D’Amato about this photograph, one of his most iconic images. “It’s just that some moments and gestures can appear surprisingly profound.”

The Lake Street El tracks cut across the West Side of Chicago, a procession of steel and concrete that spans the breadth of the city from Wabash Avenue downtown to Harlem Avenue on the far edge of Oak Park. Speeding along Lake Street—weaving between the riveted steel supports in a car, or roaring along two stories above the street in a crowded train—the vast diversity and disparities of Chicago fly past you. Enamored of the industrial beauty of the El tracks, Paul D’Amato initially photographed these structures, but he was quickly drawn to the people he met along Lake Street and made them his primary focus instead. Eventually, the train tracks receded into the background of his photographs, becoming the backbone of a project that consumed him for more than a decade.

Spurred by questions of race, class, and the dynamics between photographer and subject, in 2004 D’Amato began to chronicle dramas large and small of ordinary people living on Chicago’s West Side and the now-demolished Cabrini Green, both exclusively African American neighborhoods. Formally elegant, his piercing portraits explore nuances of char­acter, while his studies of the built environment reveal traces of human life in vivid color and texture. Equally committed to his craft and to immersion in these communities, D’Amato aspired to narrow the divide between his sitters’ lived experiences and his own to create photographs that are at once genuine and aesthetically engaging.

D’Amato’s photographs offer a timely account of life in an American city at the begin­ning of the new millennium, yet these images also seem divorced from any specific moment in history. Significant events related to race and class punctuate this body of work—the demise of the experiment in public housing and the election (twice over) of the nation’s first African American president—but little of consequence seems to have changed for the residents of Chicago’s West Side. Disparities between wealth and poverty are most severe in this area, though not necessarily most visible. D’Amato’s images allude to the ebb and flow of shaky economic times, while relaying stories that never make headlines. Neither feel-good stories nor tales of despair, D’Amato’s photographs convey the complexity and ambiguities of everyday life in a community at the margins both economically and socially, with few available avenues to articulate
its presence, its concerns, and its reality.

Like all portraits, D’Amato’s photographs are inherently collaborative. They involve a dance, a performance on either side of the camera. D’Amato’s subjects dominate the frame and often gaze directly into the camera. His exacting compositions are direct, even austere, but they exude an overwhelming sense of individual gravitas. The locations where he made these pictures often appear worn, in disrepair and marked by a complex social and political history. The vivid large-scale prints imbue his photographs with a heightened sense of immediacy, as their subjects assume an imposing presence. D’Amato’s formal dexterity and attentiveness to individuals and the nuances of their character prevent his photographs from succumbing to sentimental­ity or sacrificing their social conscience.

D’Amato’s photographs ask much of us as viewers. Though formally rigorous and rich in detail, many of those details remain elusive and the photographs instead embrace an ambiguity that allows us to experience things we may not fully understand. While they privilege the significance of individuals as more than symbols of race and class, these photographs offer little in the way of tangible facts. Like so many neighborhoods, Chicago’s West Side is a complex and challenging place, and it would be foolish to think that we could fully grasp the lives of the people lookingback at us from a photograph. Photography often does its best work when dealing in subtleties. Ultimately, D’Amato’s photographs offer us a glimmer of insight into life as it is lived, day in and day out. They require us to bring our own complicity to bear on the issues they raise, the stories they tell, and the emotions they elicit.

Gregory J. Harris is the Assistant Curator of Photography at the High Museum of Art in Atlanta, GA.

Paul D’Amato lives in Chicago, IL, and completed his residency at Light Work in July 2016.
www.pauldamato.com