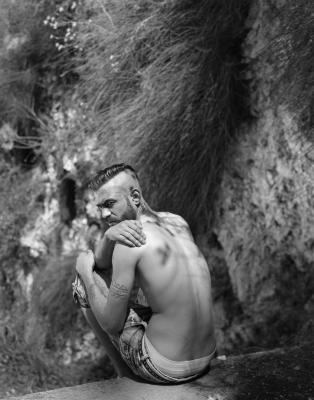 George Awde is a visual artist currently based in Doha, Qatar. He is the co-founder/co-director of marra.tein in Beirut; Assistant Professor at Virginia Commonwealth University in Qatar; and recipient of numerous awards and fellowships, including those from the Aaron Siskind Foundation and a US Fulbright Scholar Grant. Awde’s work explores the formation of kinship, masculinity, the “state,” and the self. His work explores human corporeality and how we reconcile ourselves with the world. He earned an MFA in Photography from Yale University, and a BFA in Painting from the Massachusetts College of Art.

Images migrate regularly, innumerably, as angular segments of the world, into zones of consciousness. They traverse embattled borderlands, indexing moments, entering our field of vision, restructuring the parameters of how we decipher the state of things. As George Awde’s work is immersed in the journeyed fantasies of proximity alongside harsh realities of geo-political crossings, his approach presents a series of fluctuating urgencies, urgencies with the capacity to intimately transform individual desire into collective desire.

I met George while staying in his apartment—which operates mostly as an artist residency—in Beirut, in 2013. That same night, he invited me to join him on a visit to see his friends nearby. We arrived—carrying bottles of juice, snacks, and cigarettes— at an unlit construction site, a multistory cement skeleton swathed in green netting. As we entered a side passage, I shook the hands of men aged eighteen to forty. All were Syrian, in Lebanon as temporary laborers, and each had cultivated a relationship with George spanning many years. Several were long standing subjects in George’s photographic series.

We sat in dusty plastic chairs arranged before a second-floor view of a public park. The boys teased George gently, affectionately, then swiftly turned their combined attention to a cell phone, instant-messaging George’s partner Jared in Cairo (at which point George turns to me and whispers, “They all love Jared, it’s so annoying!”). After midnight, following prolonged individual goodbyes, we departed. For the rest of the week I would witness the diligence of a daily practice: up and out of the apartment with his equipment in the dawn light, and out again just before dusk the same day.

Elsewhere, Beirut nightscapes suggest wild borderlands or meeting points. Car headlights pinpoint nighttime coordinates, designated by a large rock or rusting rebar. If the city’s margins are spaces for improvisation and chance, then George indexes each encounter by literal shots in the dark, documenting an ongoing intention. Contrastingly, morning sun bathes the next photograph: Beirut pastoral as backdrop for a portrait. A Syrian youth is poised to draw near. Upon his shirt the word, “You,” lends literal reflexivity to a politics of visibility.

A collaborative phenomenon subsequently arises: a becoming-mutual, a kind of digital picture parity. That is, photographic subjects begin sending George pictures they’ve shot themselves in Syria—candid, quotidian, posed, hyper-masculine—via social media. In a group portrait of mostly men, a body on the periphery passes as male, expanding the margins of performative masculinity. Next, a child, beautifully and strangely framed from above, lies supine after being washed. Then, a fighter portrait fulfills an almost mandatory show of arms. Lastly, George’s self portrait completes the thread, sitting in the binding of this publication, straddling the border between transmission and reception.

Thus does photography perform a visual migration, instantly permeating borders, for example, from one body holding a mobile to another body holding a mobile. Photography is never devoid of risk; it might even embody the political apparatus of risk itself. The decision to companion the men’s mobile photos within George’s larger body of work advocates for collective agency crucial if we imagine a new kind of art world, indeed if we imagine a new kind of world. Market exchange would abide by unfamiliar structures of value. Power and influence would be granted only to those who insist on persistently demolishing hierarchy. Passion and tension would rely on a multilingual invention to negotiate the way we visualize and relate to ourselves and each other.

Anyone may witness the rawness of this world, halt it with a photo, and open its residue to a viewing expanse: for reflection, and sometimes for pleasure. We are images. We cross legions of thresholds, parcel to this geo-political present, eluding borders that want to restrict our movement on a daily basis. Our surfaces bend and wrinkle, leaving us vulnerable to the desired eventuality of a multifold, ecstatic destination. George’s project, the matter of generosity and constructed kinship, offers us consistent glimpses of
some of those ecstatic destinations.

George Awde lives in Doha, Qatar, and completed his residency at Light Work in July 2015. www.georgeawde.com

As the global refugee crisis escalates, and the early executive orders of a new and contentious president attempt to block refugees from entering the United States, the themes of artist George Awde’s work seem prescient. Raised by Lebanese immigrants in a suburb of Boston, and currently living in the Middle East, Awde’s experiences inform his perspective on the world, his place in it, and his practice as an artist and a teacher.

Awde studied painting at MassArt, which would lead him to pursue a MFA in photography from Yale. His graduate thesis, Homeland America (2007-09), focused on US immigrant communities, nourishing future work that investigates identity and social and political unrest through a very personal lens. The project considers a post-9/11 society that often views Arabs and Muslims as inherent threats. His autobiographical self portraiture informs us about his own life and family.

After his father’s death, Awde returned to the Middle East. There, he continued to make work and began to photograph young migrant laborers in Beirut in Cairo. From this grew his recent projects, Quiet Crossings (2007-09) and Shifting Grounds (2011-13). Awde’s photographic work explores themes of contemporary masculinity, the male body, friendship, sexuality, and notions of physical and psychological strength, as seen through young men with whom he identifies. The men and boys whom Awde has photographed over the last ten years include migrants from Syria. Many are now close friends. These relationships allow for an intimate portrayal of their everyday lives. His pictures explore the way that people interact with one another, and in them one senses a longing to belong. His photographs consider notions of “home” and deep internal struggles that mirror constant political conflict.

As an exhibition, the photographs in Scale Without Measure span Awde’s oeuvre. He combines gentle yet striking portraiture with landscapes and architectural views that are also emblematic of emotional states. Some images look voyeuristically into the windows of nearby buildings. In one, a man carefully shaves before a small broken mirror propped on a window ledge. Another, made at night, shows how densely many people sleeping fill an apartment’s couches and floor. One large photograph abstracts a hill’s rocky terrain—a painterly image both beautiful and suggestive of the fragility of this particular time and place.

Many of the men in Awde’s photographs resort to odd jobs, “hustling” and laboring to survive, some returning to Syria as mercenaries. Awde maintains contact with them by instant messaging on WhatsApp. Over the years, he has saved the snapshots they send him and recently experimented with presenting them alongside his own photographs as a way of weaving their own images into his work. For this exhibition, Awde made digital negatives of the images and then silver gelatin prints in the darkroom. These he presents as small contact prints (about the size of a phone screen) enclosed by a dark border of photo paper exposed to light. This gives these photographs a certain gravity absent in digital communication, and draws parallels between Awde’s view of these men and how they represent themselves. The subjects range from workers on a truck harvesting a crop, a naked child getting bathed on the ground, a couple on their wedding day, and a group of men with machine guns, one of them gesturing a lollipop at the camera.

Signed just one week into his presidency, Donald Trump’s executive order, “Protecting The Nation From Foreign Terrorist Entry To The United States,” intended to indefinitely prevent admission of Syrian refugees and suspend visa entry from Syria, Iran, Iraq, Somalia, Libya, Sudan, and Yemen—countries with “predominantly Muslim” populations. "Radical Islamic terrorists… We don't want them here," Trump stated. Some challenge this as unconstitutional, discriminatory, perhaps illegal. Presently, a federal judge has blocked a portion of the order, creating uncertainty about the outcome. People around the world endure turmoil and fear; daily protests signal a growing global resistance.

For Awde, this is decisive. He respectfully declined our invitation to Syracuse for his opening reception out of solidarity with the individuals who are central to this work, and others vulnerable to emerging policies. “It's been very difficult to be in a place where I can't protest, and to be far from all the mobilizing that has been happening in America,” he wrote us from Qatar. “I think it would be a more powerful statement for me to not come.” Awde’s chosen absence draws our attention to the vast differences in mobility among so many individuals that affect their sense of freedom and identity every day.Awde’s title, Scale Without Measure, alludes to the unknown: to what the young men in his photographs—and the many other thousands—leave behind, and to what lies ahead. “A scale without measure is something that can’t quite be grasped,” he explains, suggesting something at hand that exceeds our tools to really understand it. How do we measure security, stability, growth, movement, value, and desire?