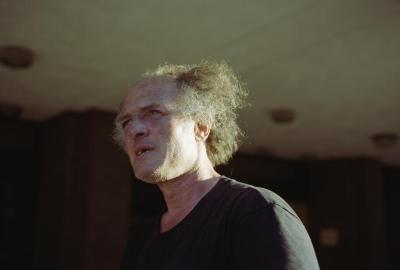 Before developing Multiple Chemical Sensitivity, Jensen worked as an editorial photographer for numerous magazines, including Newsweek, Details, and Blender, among others. Her work has been exhibited internationally, and featured in articles in Doubletake/Points of Entry and I.D. Magazine.

Laura Heyman (Syracuse, NY) submitted work from her series The Photographer’s Wife, which presents a female subject gazing intimately at the camera, suggesting an artist making images of their lover. However, Heyman performs the role of both photographer and subject, further complicating the already tricky relationship between artist and model. In making use of this visual trope, she appropriates the male gaze and examines the history of images made by male artists of their wives and lovers, specifically referencing portraits of Georgia O’Keefe, Eleanor Callahan, and Edith Gowin, while playing with various photographic conventions, such as travel and sensual imagery.

Heyman is an assistant professor in the College of Visual and Performing Arts at Syracuse University, teaching courses in photography and critical theory. Her work has been shown internationally including recent exhibitions at the Deutsch Polen Institute in Darmstadt, Germany; and Ampersand International Arts in San Francisco, CA.

Thilde Jensen (Truxton, NY) submitted work from her series Human Canaries.  The images are a personal account of the life she has lived with Multiple Chemical Sensitivity, and the people she has met who suffer the same condition.  People with this sensitivity have been dubbed “human canaries,” and they are the casualties of what Jensen calls a “ubiquitous synthetic chemical culture.”  Jensen became so sensitive to chemicals in the air that she could not be in traffic, read a book, or sit next to someone wearing perfume. She was forced to wear a gas mask when entering banks, supermarkets, and doctor’s offices.  She left her life in New York City, her husband, and her career, and moved to the country where she lives in a tent away from regular chemicals such as laundry detergents, pesticides, and exhaust.

Before developing Multiple Chemical Sensitivity, Jensen worked as an editorial photographer for numerous magazines, including Newsweek, Details, and Blender, among others. Her work has been exhibited internationally, and featured in articles in Doubletake/Points of Entry and I.D. Magazine.

Rishi Singhal (Ithaca, NY) has traveled the world photographing his series Condition of Urbanity since 2004. His work explores the natural and built environments, and their interrelationship. He is particularly interested in certain transient zones within urban environments, where the inherent dualities of subsistence constantly refer to the transforming world order, both physically and metaphorically Singhal photographed this series first in Western Europe, and then in New Delhi, India, followed by Central New York. He has photographed rapidly growing cities with booming economies, as well as cities struggling under loss of jobs to offshore agencies, urban and social planning failures, and industry closure. Singhal received his MFA in Art Photography from Syracuse University’s College of Visual and Performing Arts. His work has been exhibited internationally, including exhibitions in China and India.

Light Work would like to congratulate all of the winners of the Thirty-Second Annual Grants in Photography, and extend a special thank you to our judges: Lonnie Graham, Lisa Robinson, and Marni Shindelman.

Lonnie Graham participated in Light Work’s Artist-in-Residence program in 2000.  He was named Pennsylvania State Artist of the Year in 2005.  He is currently a professor of visual and integrative arts at Pennsylvania State University, and an instructor of special programs at the Barnes Foundation. Lisa Robinson participated in Light Work’s Artist-in-Residence program in February 2006.  She lives in Jackson Heights, NY, has been photographing snowscapes since 2003.  She looks for man-made, singular objects blanketed in heavy layers of snow.  Marni Shindelman is an assistant professor of art and an associate of the Susan B. Anthony Institute for Gender and Women’s Studies at the University of Rochester.  Her work ranges from printmaking to photographic imagery to sculpted soap. It incorporates found hypertexts, medical myths, and news events with icons of the banal.

The Light Work Grants in Photography program is part of Light Work’s ongoing effort to provide support and encouragement to Central New York artists working in photography. Established in 1975, it is one ofthe longest-running photography fellowship programs in the country. Three annual recipients receive a $2,000 award, an exhibit at Light Work, and an essay with selected images published in The Light Work Annual. Serving as this year’s judges were Larissa Leclair (Founder, Indie Photobook Library), Ryan Linkof (Assistant Curator, Los Angeles County Museum of Art), and Todd J. Tubutis (Executive Director, Blue Sky, the Oregon Center for the Photographic Arts).

The recipients of the 41st Annual Light Work Grants in Photography are Allison Beondé, Thilde Jensen, and Costa Sakellariou, all of whom use personal truth as a tool to better comprehend the world around them. Operating in very distinct modes, all three artists allow an awareness of space to guide their image-making.

Allison Beondé’s 1947, Roswell investigates the historic 1947 UFO sighting in Roswell, New Mexico, and how the event and its legacy straddles fact and fiction. Engaging various modes of photography—from constructing a camera to produce unique abstractions, to working digitally, and collecting found imagery—Beondé considers the ways in which a photograph can exist as an image, a piece of evidence, a physical object, and a falsehood, creating a narrative of her own. Her photographs whisper. The quiet scenes Beondé unfolds ask more questions than they answer: what is this fiery light creeping through this earth formation? What is above us that alarms this dog? In The Station, the reflective glass becomes a portal, an entrance to an otherworldly vehicle—or is it simply the entrance to a shopping center?

In her internationally acclaimed monograph The Canaries, Thilde Jensen (also a Light Work Grant recipient in 2006) photographs those living with Multiple Chemical Sensitivity (MCS) and the spaces into which their illness requires them to retreat. Banished to remote areas, those living with MCS outfit tents, cars, and trailers, removing themselves from society at large in order to evade risk to their health. Jensen, also affected by MCS, was forced to leave her life in New York City and career as a documentary and editorial photographer. She confronts her subject matter with great sympathy, capturing the paranoia and forlornness MCS forces upon victims.

A similar sensitivity is present as Jensen photographs in her series, The Unwanted. Pointing to “America’s failed capitalist system, valuing profit over human welfare,” Jensen photographs the homeless community in Syracuse, entering their impoverished spaces of refuge—under highways or in abandoned buildings—to “uncover a complex underlying picture of neglect, impoverishment, loss and abuse,” while also exploring the dislocation and alienation of their circumstances. Few of the people Jensen photographs interact with the camera, but instead stay huddled together and wrapped in blankets in the vicious Syracuse winter. Jensen reveals small glimpses of the community her subjects have created for themselves, but also the alienation of their situation: Eric in the Bushes, with nowhere to go, lies in fetal position, staring off into the overgrowth. Jensen has recently expanded her project, now photographing in Las Vegas, which in many ways is a center for the gross underbelly of capitalism in its extremes: the lucky and the unlucky—the unwanted.

Before settling in Binghamton, NY, in 1998, Costa Sakellariou’s work had taken him to many places. From the mid-1980s until 1992, Sakellariou worked as a photographer for weekly news magazines in Athens, Greece; Islamabad, Pakistan; and New Delhi, India. In 1992, he began working on The Last Greeks of Istanbul (which would later be among the first photobooks published in Greece), a long-term project documenting the dwindling Greek population of Istanbul, a city their forebears had founded 2500 years earlier.

Sakellariou’s images have a grim sense of humor, many evoking the shy chuckle of the naughty joke. The public display of intimacy of Straddled Woman or the slight smile of the woman in Phallus and Girl seem to imply a moment of entanglement—with another, or within one’s own mind—of inner worlds. Sakellariou, operating as a fly on the wall, catches these moments. Similarly, in Woman in Derelict Room and Undertaker in Waiting (both photographs of elderly subjects, presumably among the Last Greeks Sakellariou speaks of), large swaths of light fill a noiseless space as a woman looks out the window; the sleeping man in full dress almost seems to disapprove of the scene in dreamstate.

Rather than simply tell a story, these artists work to generate complex narratives. Beondé, Jensen, and Sakellariou all challenge the audience to explore every possibility of image in reading their photographs.