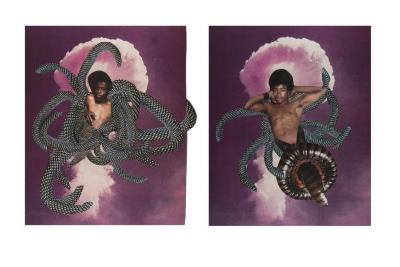 Diptych, two collages on one board

For a more recent CV or bio please visit the artist's website, www.sunewoods.com

Suné Woods is an artist living in Los Angeles. Her work takes the form of multi-channel video installations, photographs, and collage. Woods practice examines absences and vulnerabilities within cultural and social histories. She also uses microsomal sites such as family to understand larger sociological phenomenon, imperialist mechanisms, & formations of knowledge. She is interested in how language is emoted, guarded, and translated through the absence/presence of a physical body. She has participated in residencies at Headlands Center of the Arts, Vermont Studio Center, and The Center for Photography at Woodstock. Woods is a recipient of the Visions from the New California initiative and the John Gutmann Photography Fellowship Award and is represented by Papillion.

Crossing the species divide has been a pursuit of the human community spirituality since the first humans emerged in southwest Africa over half a millennium ago. The unity of living things and even what we’d now call non-organic matter. The dream and trance consciousness of those folk known as the Khoi and San peoples of the Kalahari region expanded the realism of the dead, the living, and inorganic, even deep. Whole, sacred practices exist in Africa based on the devotional relationship to plant life. The Candomblé religion of Brasil, derived from West African Yoruba practices, deploys almost 2,000 species of medicinal flora and fauna considered essential for ritual and ceremonial work. It is in fact inconceivable that we would discuss these practices without affirming how much of the work done in these rituals is not about conjuring magic in their Western sense but performing pharmacological medical treatment on members of the healers’ own ethnic group. What we could call “diagnoses” they would highlight as divination work. Since medical divination in cultures such as that of the San Khoi and those who practice Yoruba and Candomblé involves treating the “whole” person metabolically and meta­physically—mentally, physically, emotionally, spiritually—logging the flow of information from dark matter realms beyond human perceptual capacity is key to the healing process.

When Will Smith was asked why he had turned down the role of Neo in The Matrix series he said it was because he could envision people living in machines. Nothing seems ironic or remarkably lacking or negatively prescient about Smith’s statement now since it’s really impossible to imagine folk living outside of the virtual wombs, nests, cocoons and lacunae of their smart machines nowadays—devices with whom we communicate incessantly, daily and more often than actual flesh-and-blood human beings, even at many of our workplaces. Since the means by which these hand-helds convey information from one point in space and time to another is via satellite, they too engage us in a form of “cosmic consciousness.”

The aspirational and transcendentalist aspects of the very human desire to interface with plant, animal, and artificially-woke entities is at the heart of recent work by artist Suné Woods. These works of collage, pho­tography and video allude to how deep the Ovidian impulse sits within us—a will not to power per se but to shape shift and trans­genically morph into hybrid cyborg forms of posthuman Black being, beings of a throwback and a flash forward nastier (sic) simul­taneously. Woods’ creatures that are in liminal phases of transformation. They are on their way to becoming something way stranger than fairy-tale sprites possessed by their spirit- animals. What their emergent and synthetically bricolaged identities speak to is critical loss of faith in the empathetic and environmentally connective limits of the biologically human.

In her photographic diptychs, Woods doesn’t editorialize or moralize about the implications of her imaginary flights of transformation. This gives a matter-of-fact reportorial cast to her representations of Afro-machinic, Afro-botanical, Afro-crustacean and Afro-surrealist fantasias. In her video,  A Feeling Like Chaos, however, Woods offers more of a peek behind the curtain of her own ambivalence—certainly as these relate to catching feelings about a popular onslaught of radical high-tech re-engineering of a people’s Goddess-given bodies.

The double-edged nature of technology as weapon and tools is alluded to, as is Mother Nature’s meteorological disfavor with our ecological hubris, suggesting an impending apocalypse. The notion that we may come to share intimacy and divine knowledge with each other through literally speaking in (licking) tongues is also strongly proposed. As is the notion that lounging about with two heads and four hands might one day be our lapsarian fate.

The fraught, exposed, and shambling return to The Garden seen in A Feeling’s post-apocalyptic pastoral scene brings to mind the morning-after vision Jimi Hendrix proffered in these lyrics from his suite, 1983  A Merman I Will Be, on the album Electric  Ladyland: “Well it’s too bad that our friends can’t be with us today/The machine that we built would never save us/That’s what they say (That’s why they ain’t coming with us today)….”

Greg Tate is an author and musician who lives in Harlem, New York.

Suné Woods: To Sleep With Terra

In the exhibition, To Sleep with Terra, Suné Woods uses a variety of source material from books, magazines and news media to create three dimensional collages and video. Together, this body of work challenges our notions of photography and explores the terror of a technological society spinning out of control.

Woods created this work in 2015 during a period of extreme racial violence, police brutality, and mass shootings. Woods says 2015 was no more violent than previous years, but what shifted was growing documentation by citizen journalists that undermined the public’s denial and disbelief. For the artist, the process of tearing, crumpling, layering, and recombining photographic imagery was “the best way for me to articulate the complicated sensations that were arising while processing these streamed documentations of violence, ecological disaster, and a desire to understand more deeply how seemingly disparate things relate when they are mashed up in a visual conversation.”

This mash-up of imagery is reminiscent of how we consume information every day—sometimes minute by minute—as we scroll through a frenetic onslaught of global disasters, degradation, and violence.

Woods’ video, A Feeling Like Chaos, is part of the installation of collage work in the gallery. The pace of this video is rapid fire too, as three black female protagonists move through a narrative in which exploding, apocalyptic scenes depict a war zone. The artist describes them as the conjurer, the guerilla, and the wandering sage. Throughout this video, we see collaged images of biomorphic weaponry that combine both dismantled gun and animal parts. Other collages contain images that appear to be machine parts or transmissions, perhaps covered with transmission fluid or blood. News media footage of a bullet-riddled car, armed troops, a crumpled police car, or a coast guard rescue scene pair with fragmented audio that flips back and forth among a calm voiceover, silence, loud explosions, and a police helicopter’s intense whirring. The audio follows you through the gallery, reinforcing your sense of helplessness and alienation. The only signs of hope are the women. The wandering sage, in particular, clad in animal skins, is resplendent with the wisdom and strength embodied in her strong features. The conjurer laughs in the face of danger. The guerilla, stealthy and calm, is armed and ready.

The presence of these women reminds us of an idea that African American science fiction author Octavia Butler first asserted. An important figure in Afrofuturism and Cyberfeminism, Butler felt her experience of living under racial oppression and hostility had equipped her well to write about survival in the coming widespread social and political meltdown of 21st century America. Suné Woods deftly moves this dark, futuristic narrative into real time, with today’s acceleration of disasters, economic inequality, and corporate greed. In using familiar found imagery and news footage, Woods jolts us out of our own complacency to face the contemporary dystopia to which the nightly news accustoms us.

In the collage, Divel Baptism, the artist has torn a worn and faded photograph by Marion Post Wolcott from the pages of a book. Wolcott’s photograph depicts a church community, circa 1940, dressed in their Sunday best, standing on the banks of river in the bright Kentucky sunshine. They are witnesses to a baptism. In the center of the river, the pastor raises his arm to pray over the newly converted. Long, black, slender fingers push through the spine of the double page spread to pierce the center of Wolcotts’ bucolic scene. With this simple gesture, Woods transforms Wolcott’s photograph into a terrifying document about a sanctimonious, segregated church, and exposes years of sanctioned racial violence. Suddenly the silence and passive assent of these river bank witnesses is chilling.

Suné Woods’ collage work makes art of the ordinary ephemera in our daily lives, and clarifies and reveals a truth just beneath its surface. Unafraid to confront us with the brutality that surrounds us, her work only grows in relevance and urgency.