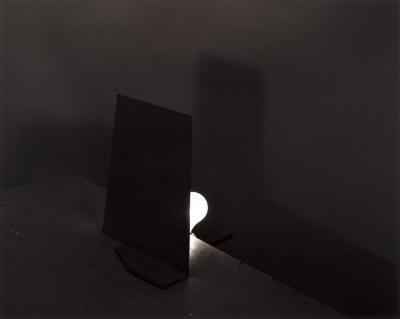 John is a member of the Cake Collective international photography network.

Quite possibly the best way to look at John Mann’s photographs is to assume that they won’t tell you anything. Do not approach these images expecting to be transported to exotic realms in faraway lands or insisting on profound revelations. No. The object is in the viewing, and the experience of viewing.

These are not conventional photographs. That is to say, they are very conventionally made, with simple materials in sites that, even when located outdoors, feel like studios. One might recall John Pfahl, Abe Morell, or Kenneth Josephson in their diagrammatic, self-explanatory attitude. However, complex implications belie the directness. What Mann addresses in his photographs is our predi­lection for reason, a desire for photographs to manifest a certain, frame-defined closure. Mann’s photographs, when examined, continue to open.

Opening doesn’t always mean clarifying. Much of Mann’s imagery incorporates darkness, along a continuum from dark gray to unfathomable black. The idiom of darkness is so compelling in an art form ontologi­cally devoted to the capture and descriptive use of light. The absence of light in photography brings with it a hint of madness. The occasional, destabilizing flash of high key whiteness in these images adds metaphysical weight to the shadows. These works usher you toward terrain inconnu, spaces in which quantitative analysis has made little headway. The artist speaks of his photographs as embodying “intense darkness.” Such recesses evoke the quixotic notion of a “deep” photograph, a cavity that functions like the gateway in the back of a C. S. Lewis wardrobe. That is, the darkness allows you to travel into a space of talking lions and witches seducing naïve children with addictive treats.

Well, maybe. I suspect this isn’t quite what John Mann has in mind. But one might project oneself into the darkness in such a fashion. There is, to be sure, a nod to the self-examining steps a viewer might carry out when encountering a work of abstract expressionism. What qualities do you project into the frame? What reactions does the work elicit? What does it see in you?

Fanciful metaphors aside, the fact is that photographs tend to be resolutely, symbolically flat, whether mirror or window (in John Szarkowski’s metaphoric parlance) or, as rendered in work by Henry Holmes Smith, Allison Rossiter, Ellen Carey, or Marco Breuer, optical-chemical effects on a graphic plane. Mann’s photographs start with flatness, then tinker with our perceptions of other dimensions.

Non-photographic precedents for Mann’s darkness include the unsettling sculptural works of Lee Bontecou and Ken Price, both of which employ apertures that compel attention but illuminate nothing. Likewise, there are any number of visual artists whose non-representational work seeks expression of inchoate, unclassifiable attitudes toward the world. On the more reduced end of this spectrum, echoing Mann’s simplicity of means, think Robert Ryman, Richard Tuttle, Anne Truitt, or Ellsworth Kelly, artists who refuse to offer access to worlds outside of the piece. (And no wardrobe portal lurks within them.)

Another fitting parallel is the opaque quality of ink in the shadows of a gravure-printed page, a velvety and impenetrable darkness that compels respectful attention. (Weegee’s 1945 book, Naked City, with its brilliant, flash-lit truths and impenetrably criminal shadows, is a highly pertinent example.) Perhaps this sensuous absence beckons like a Lorelei on the banks of the Rhine. There is, after all, a beguiling, unmistakably photographic beauty to these images. My guess, though, is that Mann’s goal is not to dash my ship on the rocks but simply to complicate my course and remind me to take nothing for granted.

So many questions arise from these images, and none of them require answers. But still… What is that construction of wooden pieces supposed to represent, anyway? Looks something like a toy plane, but not one with any flight potential. How does that crinkled paper float like that? Who dropped those white hyphens and dashes into that scribbled maze of dark twigs?

Optical confusion accompanies the per­vasive darkness. Confusion is not illusion. These are documents of inconclusiveness that use simple materials and call out in a plain voice. The truths are right there in front of our eyes. Yet our vision floats in and through the work, led by our adaptive desire to rational­ize and comprehend the landscape in front of us—whether two dimensional or three, we want to identify and name what we are seeing.

Mann urges us to shelve our predilection for clarity and meaning. Be daring, the work says. Don’t just see, but actively look. Enter those caves and do some spelunking.

George Slade is a writer and photography historian based in Minneapolis, MN. Find him online as “re:photographica.”

John Mann lives in Tallahassee, FL, and completed his residency in June 2016.