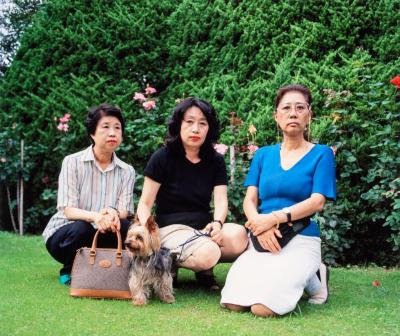 For a more recent CV or bio please visit the artist's website, www.tkaneyama.com

Takahiro Kaneyama’s work has earned international recognition, garnering a 2013 Tokyo International Photography Competition Jury’s Choice award, a 2000 Fujifilm/Fuji Photo Salon’s Rookie Of The Year/New Face Award, a Canon New Cosmos of Photography Award, Recruit’s Guardian Garden Hitotsubo-ten Award, and Guardian Garden Recruit Fellowship. His photographs have been exhibited in solo and group exhibitions around the world, and are in private and museum collections including: Mr. and Mrs. Avedon of The Richard Avedon Foundation on the occasion of Japan Earthquake/Tsunami Relief, Kiyosato Photo Museum/K’MOPA in Japan, The City College Of New York, CUNY in New York, NY.

Takahiro Kaneyama’s photographs stand as a visual marker of a family and a nation, just as they document an artist’s journey to and from these two critically important subjects, each that has defined him, and by extension, his work. To say that the artist’s relationships with his family and his birthplace in Japan are complex is both a vast under­statement and an unavoidable truth. Through capturing his mother and his two aunts over time and space, Kaneyama creates new relationships with them, yet always from a distance. Likewise, his images of the urban landscape both situate and embroil him in a given place, yet as a resident of far-away New York City, a place that grows ever further away from him.

What then does it mean for an artist to return home, to capture and document the physical space he once inhabited, and the family that nurtured him there? Haunting and elegant in equal measure, Kaneyama’s pictures have for me always stood as a reckoning of sorts—as a search for meaning about one’s roots and how they shaped and formed him. As a Japanese expatriate, the artist has contact with his family and home that is usually mediated by distance and through technology. The distance between the two, it is important to note, is not accidental, having happened for a litany of reasons both personal and professional.

Here it is also important to note that trauma and illness have not been strangers to the Kaneyama family, just as they have not to 20th-century Japan. Historical, geopolitical, and natural forces have constantly collided over the time-frame in which modern Japan emerged: a web of chaos that against all odds gave birth to a world power, a place steeped in ancient mythologies, and yet a true example of the future in all its many iterations.

And just like the nation from which he hails, so too was Takahiro Kaneyama’s upbringing marked by upheaval and hard times through the depression that befell his beloved mother throughout her life. Without it, however, the artist whose work we celebrate today may have never emerged. For him, chaos was nec­essary to the formation of the singular vision that he shares with us through his work.

By turning the camera on his mother, his aunts and upon Japan herself, in myriad ways, Kaneyama attempts to heal the disruptions of history, to erase the scars of experience. His work thus becomes a document of a place and a group of people whose lives have played out there, forever enmeshed and always overshadowed by the ghosts of the past. And yet, Kaneyama’s pictures are far from sad, and remote from the clinical. Through his mastery of framing and distance, his pictures always create a sense of intimacy fraught with indifference, an incredibly difficult tension to achieve.

In the end, Kaneyama becomes a witness to his family and to Japan when safely sep­arated from them by his camera, a metaphor for the thousands of miles that stand between him and family and Japan alike when he is safely ensconced in his American home. And yet, one cannot help but sense that the artist, once he lowers his camera, must deal with the realities of both mother and nation, taking on the role of faithful son to both. Regardless of circumstance, none of us can ever fully escape the ties that bind us to family and to home. Each of us constantly navigates the wide spectrum of possibilities these poles provide, from filial piety and constant residency to wanderlust or outright abandonment. As we shape and form our own personas, our own stories and our future selves, we must constantly come to terms with our his­tories and the circumstances in which we were placed. In his work, Takahiro Kaneyama perfectly conflates all this—and much more—into an auto­biographical record that is fully controlled and carefully orchestrated. Through the placement and selection of his subjects, both human and natural, Kaneyama brings order to an otherwise imperfect world.

Eric Shiner is the Senior Vice President of Contemporary Art at Sotheby’s.