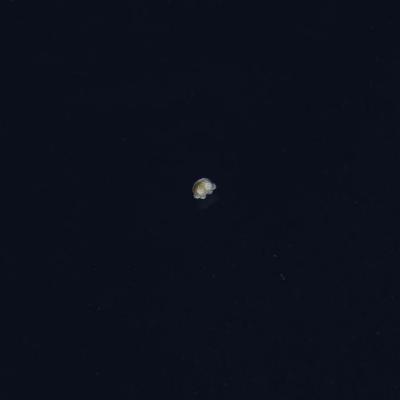 Print sheet is 23.375 x 21.125 Included is a "Certificate of Aunthentication" Printed on 8.5x11 heavyweight Matt paper. Certifies the print as an editioned print 1/5

Being immortal doesn’t spare you from death. There’s still starvation, for example. Needed resources can run out, living conditions can become hostile. Accidents happen. A creature more intelligent and more powerful than you might control your environment and view your life with curiosity, or even indifference.

When we humans encounter misfortune from freak occurrences of weather or nature, we call it “an act of God.” It’s strange to think we wield such power over others. I mean, take bacteria. Mostly, we don’t even see them.

When we look in the mirror, do we see ourselves as powerful as gods?

“Volunteer 5 dies on the slide under the microscope,” writes Maija Tammi in the laboratory notes of her new series, Volunteer 4. She’s working with Hydra, a genus of small fresh-water polyps around 5-15 mm in size, together with Robert B. Silver, a biology professor at Syracuse University. The creatures appear not to age or die of old age―in other words, they’re biologically immortal.

In the case of “Volunteer 5,” the cover glass on the slide has broken, and lens oil has crystallized the water in which the Hydra lives. It may be immortal, but it can’t survive.

Volunteer 4 is a follow-up to Tammi’s series, White Rabbit Fever, in which she balances the mortality of decaying mammals against the immortality of cancer cell lines. She presents microscopic views of living cells harvested from people who are now long dead, illustrating a deeply ambiguous grey area in the definition of death, something apparently so black and white. White Rabbit Fever presents the philosophical quandary, “What is death?” while Volunteer 4 provocatively asks, “Is there such a thing as an unnatural death?”

Perhaps if death were not the inevitable conclusion to our own human lives, we would not find it such an awesome topic, both magnetic and repellant. Freud described the force opposing our desire to live―the vertiginous pull towards annihilation of the self―as the “death drive,” which Paul Federn later described as “Thanatos,” after the Greek personification of death. There are movements in science to overcome both our aging and death, and spirituality often bypasses the matter altogether by comforting us that some non-physical part of ourselves is eternal. The fact that we will die influences how we live to such an extent that we rebel against our own nature. Yet, for now at least, our biology dictates both aging and death, so we live our lives under the threatening tick-tock of a clock.

In White Rabbit Fever, Tammi photographs a decomposing rabbit over a period of one hundred days. On the first day, the rabbit still has soft fur. It might be sleeping. By Day 11, the fur remains but the rabbit’s shape is notably flattened. By Day 17, the rabbit is reduced to a nearly indistinguishable pile of grey fluff. Looking at this is disturbing, but only because of our discomfort with our own biology. As days go by, we can see the being that we called a “rabbit” disappear―but where did it go?

And when exactly can we say that the “rabbit” is no longer there, anyway?

Looking at Tammi’s images of the immortal cancer cells―microscopic traces of life that survived their host―raises conflicting emotions. I find myself jealous, intimidated, admiring, suspicious, even tickled with wonder.

In the case of cancer cells, they are lifeforms that may kill us. In Tammi’s laboratory of Hydra, it’s the other way around, and I find myself feeling sorry for them because they may lose the opportunity to live out their immortal nature. During the project, the Hydra are cut in two or three, and each fragment grows new appendages. Or, in some cases, they die. Who knows, they may be lucky for the opportunity to experience death.

Life and death, for all their unknowns, have given us the gift of experiencing time. We speak abstractly about the endless “circle of life,” but as individuals, all we really know is that we were born at some moment in the past and we will die at some moment in the future. How would time feel, without death? Another endless direction to gaze toward, like staring up at the stars?

The evolutionary biologist Richard Dawkins wrote, “We are going to die, and that makes us the lucky ones.” From all the biological matter on Earth―the ancient stardust that found a temporary gravitational home―there are endless options for materialization. Out of that energy, each of us has found a living human form. Sure, we’ll die too, but that’s a small price to pay.

Maija Tammi lives in Helsinki, Finland, and completed her residency at Light Work in February, 2017.

Katherine Oktober Matthews is an Amsterdam-based artist and analyst and Chief Editor of GUP Magazine. www.oktobernight.com