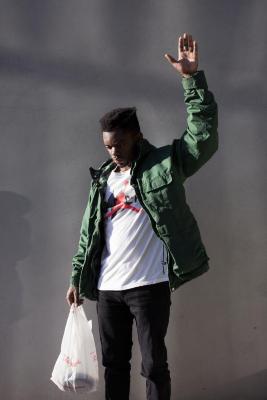 John Edmonds (b. 1989) is an American artist and photographer who first came to public recognition with his intimate portraits of lovers, close friends and strangers. His work explores themes of identity, community and desire. Noted for his highly formalist photographs in which he focuses on the performative gestures and self-fashioning of young black men on the streets of America, his work is in numerous public and private collections, including the Art Gallery of Ontario, The Columbus Museum of Art, The Philadelphia Museum of Art, the San Francisco MoMA and the Brooklyn Museum. His debut monograph, Higher, was published in Fall of 2018 by Capricious Publishing and was shortlisted for Aperture's First Photobook Award in 2018. He lives and works in Brooklyn, New York.

In his exhibition, Anonymous, artist John Edmonds combines two distinct series of portraits—Hoods (2016) and Du-Rags (2017)—both of which conceal the identities of their subjects. Through a deceptively simple approach, Edmonds unveils the complex symbolism and meanings that are inherent in our wardrobe. Edmonds shows the power of hoods and du-rags as personal and cultural statements of protest, beauty, and pride.

“All the work that I make is from a very personal place,” says Edmonds of his process. “It starts with me.” Hoods comprises striking formal studies of individuals wearing hooded sweatshirts and jackets on the street, photographed from behind. Edmonds further embeds himself in these works by photographing his subjects wearing his own hoodies. With few visual clues to guide us, we may only learn from the artist that the obscured individuals in fact vary in race, gender, and age. And, despite the anonymity of their subjects, Edmonds’ portraits are photographically anything but nondescript. Made in the bright daylight that provides clarity and detail of fabric, these images offer a sense of closeness and elicit in the viewer the sensation of approaching a stranger from behind. While acknowledging that his work begins from a personal place, Edmonds also emphasizes how necessary the viewer is for the completion of any image.

The experience of looking at Edmonds' Hoods as framed photographs hanging on the gallery wall may bring to mind artist David Hammons’ In the Hood, at the Mnuchin Gallery in New York City in 1993. For that restrained installation piece, Hammons had crudely torn a single black hood from a sweatshirt and nailed it to the gallery’s white wall. Severed, and hanging, the piece evokes lynchings, and its stark, shadowy form calls forth feelings that many young black men wrestle with when much of the prejudice and fear in the country distills them to stereotype.  Edmonds’ works convey how palpable, and unresolved, these concerns still are. For Edmonds, the personal is political. He says, “I hope my work can reflect the reality of this country right now.” Indeed, we can quickly read his suite of images as a statement on the unjust deaths of individuals such as Trayvon Martin as well as the systemic issues of racism, safety, and injustice in America.

In contrast to the charged public space that Edmonds considers with these pictures, a second series of portraits celebrates blackness and beauty through private and sensual pictures of men wearing du-rags. Once again, Edmonds photographs his subjects from directly behind, depriving us of a view of their faces. We can trace the du-rag’s origin to the head-wraps that female slaves wore during the antebellum period, and later used to preserve hairstyles, but today both men and women wear du-rags as a symbol asserting cultural pride. In these portraits, a subtle melancholy underlies the majestic and spiritual quality that also comes forward and calls to mind totems and religious iconography. A softness and warmth emanates from the colors and folds of the cloth. Edmonds exhibits these portraits on a larger-than-life, monumental scale that implies both nobility and strength, but prints these images on delicate, flowing silk.

After graduating from Yale in 2016, Edmonds decided to move to New York to begin his career as a working artist. In January of 2017, he participated in Light Work’s residency program, and spent the month in Syracuse scanning film from previous portrait sessions, editing images, making test prints, and photographing a number of new portraits for his Du-Rags series. It was at Light Work that he perfected the idea of printing these works on silk. “The impetus behind that decision was to give the same sense of experience in seeing men and women wearing du-rags in Crown Heights,” he says. “When I first moved here, I would always see the trains of these du-rags just moving in the air, never seeing the face of the individual. I wanted the works to replicate that same type of nuance... to provide the viewer with that same sense of beauty and sensuality.”

Hilton Als, Pulitzer Prize-winning theater critic and staff writer for The New Yorker, has affectionately referred to Edmonds’ works as “blue wonders.” Following a studio visit, Als recalls, “There were prints on the walls—photographs of black men and women—that memory has tinted blue. That was the mood the pictures conveyed, and how they made me feel.” In an article on TIME’s website suggesting twelve African-American photographers to follow, former Light Work artist-in-residence and MacArthur Fellow Carrie Mae Weems says, of an artist who has just turned 28, “John Edmonds is a gifted young artist with a penetrating eye.”

Edmonds takes an intimate approach to portraiture as a means of exploring of symbols of black culture and the body. Through his pictures he poses larger questions about viewership, desire, and power today, engaging us in conversations about visibility in society. What he conceals  leaves much to the viewer's imagination, revealing both how complex these images are in themselves and how significant are the preconceptions we bring to them. “At the heart of all of my work,” says Edmonds, “I want to leave people with something that is more human—despite the facade—and to open up feeling and empathy.”

Ascent (2017) is a dreamy photograph of a black figure adorned in a common protective head covering, a du-rag. Scanning from top to bottom, the image transitions from sharpness to blurry obfuscation. The rag’s tail cascades onto a furry overcoat draped over the figure’s shoulders. In this ethereal image, John Edmonds creates the illusion of a head seemingly floating amongst clouds. Reminiscent of medieval Christian iconography of saints and angels, there is something at work in Ascent in excess of visual experience. For his new Du-rag series, of which Ascent is a part, Edmonds employed the innovative strategy of printing images on Japanese silk, a luminescent textile that echoes the satin-like materiality of his subjects’ headscarves. In fact, the subtle wrinkles and waves of this hanging photograph, which Edmonds renders in gradations of white, nearly camouflage the subject’s body as indistinguishable from the fabric, allowing the artist to stage a thrillingly elusive encounter with the figure. Ascent is among other images that hang loosely. Edmonds’ choice of silk heightens the figure’s spiritual presence. Ascent brings about a transfixing meditative calm. The subject divinely stands unaware of the gaze of any onlookers. At once, the figure is both vulnerable to a gaze and unpossessed by it. So what would it mean to manipulate the circumstance of how viewers come to expect specific modes of labor from black figures? Edmonds does so by rendering his subjects as heavenly bodies, sometimes faceless, nameless, out of time, genderless, ageless, and―markedly―unascertainable. In this series, the artist is playing with our desire for certainty. He allows his figures to luxuriate in anonymity.

Before the Du-rags, Edmonds’ early photographic practice consisted mostly of portraits of young black men, often friends and lovers, whom he captured in the most intimate and private of settings: bedrooms. In his early works, he established himself as a part of the legacy of a generation of black postmodern imagists arising in the late 1980s and 1990s including Lyle Ashton Harris, Lorna Simpson, and Carrie Mae Weems, all of whom used conceptual photographs to reclaim the black body and call attention to the ideology of the gaze. In his recent work, however, Edmonds hones fashion garments popular in black culture―hoodies, du-rags, and other coverings―as mechanisms to explore the psychological dynamics of self-making and unmaking. In some cases, he even offers his own jackets and hoods to his subjects, conflating the personal and political, and implicating himself as the arbiter and interrogator of the constructed image. His photographs help us to slowly and mindfully disentangle perception from reality. For example, if clothing is inevitably a tool for self-expression and self-constitution, work such as Edmonds’ Hoods series (which he began in 2016) unfolds the ways in which these garments function as screens for public projection and consumption of black bodies and, especially, queer bodies. In the age of viral news coverage of black youth dying senselessly, often at the hands of police, Edmonds does not shy away from the sometimes contradictory associative powers of dress both as symbols of potential threat or assertions of individuality and freedom. Obvious is Edmonds’ challenging of rigid notions of black masculinities, but beneath the surface of his images, the artist opens up space for softness, intimacy, love, and desire to sit together a little more comfortably. His pictures are not rebuttals of stereotypes about black and brown men, nor are they objective “documents” of black life. Rather, they are radical alternative propositions of how we can behold anew.

As much as Edmonds is challenging the conversation about how publics come to define masculinity, he is also pushing his audiences to reconsider male beauty. Take The Prince (2017), in which Edmonds tenderly portrays a crowned figure in profile with only the soft contours of his bare back revealed. Curiously, Edmonds presents this figure as one of the few in the suite whose face he partially reveals to viewers. Using shades of gray, Edmonds evokes the masterful shadow play of African American photographer Roy DeCarava. The effects of his gentle camera-work are quietude, care, and safety. Perhaps the picture suggests he caught the sitter in a private moment not meant for the viewers’ eyes but for those of an admirer. The artist here holds space for black bodies to exist in a state of extreme vulnerability and visibility. He wants us to know that these regal people pictured are loved, desired, and revered, on par with the most divine beings celebrated throughout the course of human history.

Jessica Bell Brown is an art historian and writer based in Harlem.

John Edmonds lives in Brooklyn, NY, and completed his residency at Light Work in January, 2017. www.johnedmondsphoto.com