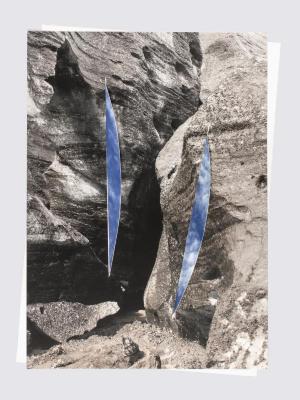 Letha Wilson is a mixed media artist who was born in Honolulu, Hawaii, raised in Colorado, and currently lives in Brooklyn, New York. Her outdoor excursions amongst the Rocky Mountains have placed the natural world and its photographic image at the root of her artistic interests. She earned her BFA from Syracuse University and an MFA from Hunter College in New York City, and attended the Skowhegan School of Painting and Sculpture in 2009. Wilson’s artwork has been shown at many venues including Art in General, The Studio Museum in Harlem, Brooklyn Academy of Music, Bronx Museum of the Arts, The Aldrich Contemporary Art Museum, Bemis Center for Contemporary Art, International Center for Photography, Essl Museum of Contemporary Art, Hauser and Wirth, Eleven Rivington, Higher Pictures, and GRIMM. In 2013 Letha was awarded a New York Foundation for the Arts Fellowship in Photography and chosen as the Deutsche Bank Fellow, and in 2014 awarded a Jerome Foundation Travel Grant.

During her residency, Wilson will be making a selection of new works specifically for a gallery exhibition at Light Work, Sight Specific.

Supposedly photography and sculpture have a relationship at odds, as picture planes and spatial objects require an entirely distinct set of perceptual habits to engage with the act of looking. Fortunately Letha Wilson is an artist who relies more on her tactile memory and the sensation of what it feels like to look at scenery and, hence, an image, than on pre-determined categories that define artistic media. Like the double nature of Janus’s faces, her photo-based sculptures of landscape imagery are as much objects as images: visual and physical artifacts of a three-dimensional world that deliberately resist any unified perspective. Wilson’s artistic practice is rooted in her firsthand experience of nature—and draws from our emotional entanglement with landscapes.

Each work originates from an analogue landscape photograph that she makes, develops, and prints, then works with, and upon, in her studio. She combines iconic vistas of canyons, bays, and fauna with materials such as cement, concrete, drywall, and paint— at times so much that the viewer imagines rather than sees the images. While her photographic subjects may provoke nostalgia, the works themselves are neither poetic nor conceptual. Instead they inhabit the delicate border, where symbolic meaning can be assigned or denied, where the impact of a landscape’s emotional vastness becomes a tangible object.

Early in her childhood Wilson and her family moved to a cabin in the Colorado mountains. On extensive family hikes, Wilson not only developed a fondness for the immeasurable scale of the panoramas she saw, but also the tonality of light, the tactility of stone, the sensation of wood.

Snapshot-photography was a part of these trips. In fact, these Colorado photographs traveled with Wilson, physically and emotionally, for many years before they became the groundwork for her artistic inquiry. Looking at these images in a different time and place, she realized that they ultimately would not and could not capture the moment she was trying to hold on to, the vision and view— the feeling—that had encompassed her then. Instead they now conveyed “another place, a third meaning.”

What Wilson describes here approaches the heart of the paradigm of photographs that, by their nature, are ultimately, always, unequal to their actual subjects. Yet—perhaps because she considers herself more a sculptor than a photographer—she is comfortable with this discrepancy and evidently enjoys both investigating these “unknown variables,” as she calls them, and making them accessible for the viewer through physical and structural components that bring this third element back in—something to bridge, or emphasize, this gap.

Take, for instance, her Face Down (Sunset), a photographic print adhered to a square, rusting, steel plate that lies face down on the floor; the viewer sees only a fragment of the actual image on the plate’s up-turned corner.  What Wilson takes apart or builds up, however, is not a simple surrogate for the immeasurable scale of the actual landscape or its visual experience, but a material translation, an emancipated object, a visual and sensorial fact as robust and complete as the places it refers to. This, of course, is a rather general characterization. Her heavy “concrete bends” have, superficially, little in common with her meticulous, elaborate, black-and-white photograms. Her crumpled and re-flattened inkjet-prints (or the torn, folded, and punched images joined to wood, steel, or other building materials) seem to be a more intuitive treatment of material than, for example, the precise incisions of her aluminum-mounted photographs. Whatever Wilson’s range of techniques, all of her works are ultimately retro- and introspective, created by intention not chance, and encapsulate different understandings of the temporality of memory.

Similar to the sensation she experienced when looking at the Colorado photographs, memories unfurl in peculiar ways, once one is removed from their specific time and place. They are wavy and discontinuous, as in the Hawaii Green Cement Fold series. She dipped three folded photographs of identical Hawaiian fauna face down in white cement that, while curing, removed areas of the prints’ emulsion, thereby altering the images. Like veils that one desires to draw apart, abstract progressions of color partially conceal, fragment, and intensify the foliage, as well as the prints’ materiality.

That Wilson uses physicality in her process, at times even aggressively, both to cover and reveal, is perhaps most tangible in Kauai Ferns Drywall Punches. This color photograph, covered by a drywall sheet, is only visible around its borders and through brutally punched holes, as if alluding to memory’s incompleteness and the effort one makes to capture an object as the mind sees it.

Sabrina Mandanici is a writer and a current Fellow of the Krupp Foundation for Museum Curators for Photography, currently living in Essen, Germany.

Letha Wilson lives in Brooklyn, NY, and completed her residency at Light Work in March 2015.www.lethawilson.com

Since the very birth of the photograph there has been a constant drive for creative experimentation with the medium. Artists and teachers of the Bauhaus, including László Moholy-Nagy, and the conceptual art practices of the 1970s, including Robert Heinecken, Ed Ruscha, Barbara Kasten, and James Welling, opened up new ways of using the image. These breakthroughs allowed for exciting avenues of working. In many cases they aimed to challenge preconceived notions of the photograph itself, through art that utilized new languages and maintained an emphasis on the intellectual ideas behind it. They paved the way for a future generation of artists and, most significantly, helped to broaden the understanding of what is, is not, and could be a photograph.

Letha Wilson makes objects that are as much sculptures as they are photographs. Each piece begins with original photographic prints of natural landscapes, which she has taken with her film camera. The source images alone are reminiscent of vacation snapshots or postcard images—the sort of vistas you might find when you do a Google image search for “Yosemite National Park” (or call to mind the famous geographical surveys of Watkins, O’Sullivan, Jackson, or Adams). The images, however, are merely a starting point for the finished works. Combining photographs with other materials such as paint, concrete, and wood, she complicates them. Wilson’s sculptural pieces immediately pose questions and probe the ways in which we interpret a landscape as a representation of place. The materials abstract and approximate the most visceral and sensory effects of the places in the photographs. “In the photo-based sculptures, the ability for a photograph to transport the viewer is both called upon, and questioned; sculptural intervention attempts to compensate for the photograph’s failure to encompass the physical site it represents,” Wilson explains. “Landscape photography as a genre is approached with equal parts reverence and skepticism.”

Around the age of four, Wilson moved from Honolulu, Hawaii, to Greeley, Colorado, with her family. They had a cabin in the mountains near Estes Park where she remembers developing a fondness for the natural landscape. Her eventual discovery of a common ground between photography and sculpture would lead her to embrace the draw of wide open spaces, while at the same time creating works that were intimately reflective. Every one of Wilson’s pieces begins as an exploration into our understanding of landscape and the power it holds over us, the power it has to transport and elicit emotion. By alluding to conventions of romanticism and mythology, and expanding the possibilities of interpretation through abstraction, she exposes a single photograph’s inability to truly contain the place it depicts, while at the same time affirming the ability of art to fill us with feeling. Wilson transforms the familiar static image by folding, distorting, and bending the iconic landscapes into complex forms that elicit an experience of the sublime. Vast canyons, desert plants, and sky from sites like the Badlands, Salt Flats, and Grand Tetons are formed into sculptural objects that carefully use the physical space of the gallery. For her show at Light Work, Wilson considered every detail of the space, down to the type of white paint used on the walls, and built a wall to add into the gallery as part of a piece. She employs the space as a canvas to consider the form and function of her objects, and how the viewer interacts with their physical quality. At times embedded into walls, floors, and ceilings, even wrapping around (or through) architectural details, her inventive and playful approach to installation informs the tactile experience of her work.

Leading up to her exhibition in the gallery, Wilson was an artist-in-residence at Light Work and  worked with new approaches to image-making and sculpture. As a process-oriented artist at heart, a month-long residency prior to her exhibition gave Wilson the necessary time and space to freely play with new techniques and ideas. Having access to the digital lab facility at Light Work “opened up the possibilities of production,” Wilson noted, and allowed for experimentation with new approaches and media. In one of her pieces, Joshua Tree Triangles, 2015, she digitally printed an image of a silhouetted tree on adhesive inkjet paper and then burnished it on to aluminum that had been water-jet cut with triangular shapes. These cuts were then carefully bent outward by hand, exposing holes cut in the same pattern through the freestanding wall it was mounted to. For another piece, Kauai Ferns Drywall Punches, 2015, Wilson used a rough cut of drywall with crater-like punctures through it to cover a lush photograph of ferns, allowing bits of the image to show through. Materials are chosen “for their dual nature as both natural element and urban signifier,” she explains. Wilson’s exhibition at Light Work serves as both a continuation of some of the ideas she has dissected in recent years, as well as an exciting display of her stepping into new territory.

Throughout her residency at Light Work, I watched as she played with possible sculptural treatments to images on the wall outside of her studio. Every few days a new photographic object would appear; creased, torn, or cut, and pinned up on the wall. Wilson throws caution to the wind and unapologetically blurs lines between mediums, in the process reminding us of the sometimes frustrating limitations of photographs and simultaneously what we deeply adore about them. It is clear that the alchemy of each work lives in her gesture—the small and deliberate acts that give a quiet power to each object.