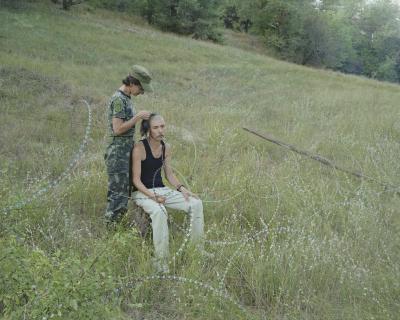 Mila Teshaieva uses photography to understand driving forces for constructed societies from the point of view of a curious researcher. Her work often combines in-depth scientific research with special esthetics and opens new layers for a viewer to reevaluate the mechanisms, which construct nations, modify memories and thus invisibly influence any of us, human beings.Since 2004 Mila has been engaged into long-term projects on the territories of former USSR, in particular, she dedicated last years working in the Caucasus and Caspian Sea region. This work has resulted in her first monograph Promising Waters that was published with Kehrer Verlag in 2013, and book “Faces and Stories of Entrepreneurs”, which she was commissioned and published by Swiss Development and Cooperation in 2015. Mila’s work has received multiple distinctions for her work, among them 1st prize in NPPA Best of Photojournalism 2010, Critical Mass Book Award and PDN Photo Annual and appeared on the pages of Courrier International, British Journal of Photography, Time Magazine Lightbox, among many others. Her Photography Projects were exhibited internationally, with the most recent solo exhibitions in Haggerty Museum of Art (USA 2015), Blue Sky Gallery (USA 2015) and Museum Art of West Coast (Föhr 2014) and are kept in several public and private collections.

In Mila Teshaieva’s photographs, time appears to stand still. Of course, this is photography’s territory par excellence. But these images stretch the moment further. Teshaieva’s subjects are out-of-time yet time-bridging: bodies performing an imagined past.

In one photograph, a bare-footed woman stands tentatively on the edge of a rusty-red freight train, her head wrapped in a flowered scarf. Holding a bundle, she looks as if she will jump. Another depicts a man and woman in the middle of a meadow. He sits on a stool, dressed in light pants and a black tank top; she stands in fatigues, carefully braidinghis dark hair. Coils of barbed wire serve as proscenium, lending their interaction a menacing air. Other images depict men and women with gazes directed afar: a solitary woman in a cabin looks poignantly out the window, cradling a ball of blue yarn. Three soldiers rest on a patch of overgrown grass, their eyes dreamy and distant. In between, silent, capacious, yet threatening images: thick ochre dust obscuring a road, a fire blazing in a quiet, snowy landscape. The last photograph is most haunting: a woman in a short dress on all fours in deep woods, looking behind her, eyes penetrating and afraid.

Imagined Community’s roots lie in the artist’s experience of her family’s past and Ukrainian history. Mila Teshaieva has negotiated these histories since she was a teenager, growing up in 1980s Kiev. “I lived in the country called U.S.S.R. until I was seventeen,” she says. After the Soviet Union’s dissolution, she “watched a dissolution of the ideas, pride, and myths, and rapid transformation to new realities. I am still trying to reflect and understand what actually happened.”

Teshaieva also found the ideological differ­ences between the eastern and western parts of Ukraine, which triggered the armed conflicts in 2014, somewhat absurd. The regions are distinct—the east more industrialized and prone to romanticizing socialism, the west agricultural and pro–European Union—but she found them not so dissimilar as to warrant deep-seated enmity. “It was the same idea at the core, of freedom and respect for people.” The idea of a nation, she realized, is based on a common agreement about what to remember and what to forget.

Teshaieva questioned commonly held history and identified nationalism as an ideo­logical construct. Personal experience provided both elucidation and further confusion. While researching at the state archives, Teshaieva learned that her understanding of her grandfather’s identity had been completely distorted by her grandmother’s stories. Rather than an exiled enemy of the state, he was a Workers’ Party member (predecessors of the Communists), involved in carrying out the traumatic famine of 1932–33.

In absorbing this unfamiliar, less honorable version of her family history, the photographer reflected on how we imagine ourselves, based on what our families say and what we accept as true. “I wanted to find a way to work with this—a documentary way—and to involve people in this conversation,” says Teshaieva. She contacted Ukrainians of different regions and asked them to reenact a scene from a family memory. She encouraged them to remember sensory details: Was it hot or cold? Were they frightened? Did they feel courageous? The details were jointly translated into charged tableaux that transformed a thought into a performance, then a photograph.

Teshaieva urged her subjects to question how they learned and knew their histories, how they understood and passed them down. At the core of this dynamic lies the understanding that all history exists because someone chose how to tell the story. Here, she echoes historian Howard Zinn, “There is no such thing as a pure fact, innocent of interpretation. Behind every fact presented to the world—by a teacher, a writer, anyone— is a judgment.”

Teshaieva proposes no judgment. Her alchemical translation of memory into image prompts viewers to question themselves. How many of us have fact-checked our grandparents’ stories? If they twisted truth in favor of a more hopeful story, how many of us would want to know a darker past? How could this change our impressions of ourselves? What comprises our idea of identity? Imagined Community prods the root of these questions, underscoring memory’s fickle ways and the long, possibly difficult road of learning and accepting one’s history.

Paula Kupfer is a writer and editor based in Brooklyn, NY. She was previously managing editor of Aperture magazine.

Mila Teshaieva lives in Berlin, Germany, and completed her residency at Light Work in October 2016. www.milateshaieva.com