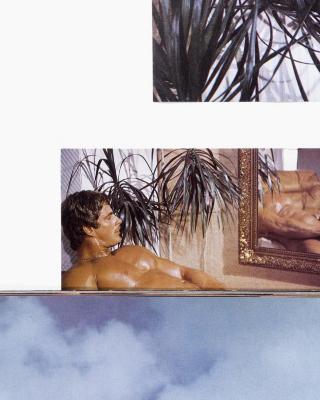 For a more recent CV or bio please visit the artist's website,  www.pacificosilano.com


Pacifico Silano is a lens-based artist whose work is an investigation into lost histories of the LGBTQ community. Born in Brooklyn, NY, he received his MFA in Photography from the School of Visual Arts. His work has been exhibited internationally, including group shows at the Bronx Museum; Context, Miami; Oude Kerk, Amsterdam; and ClampArt, New York City. Reviews of his work have appeared in The New Yorker, Art Forum and VICE. Awards won by Silano include the Individual Photographer’s Fellowship from the Aaron Siskind Foundation; Finalist for the Aperture Foundation Portfolio Prize and First Prize at the Pride Photo Awards in Amsterdam.

…especially the young ones, come into the canyon for the first time, quiet as deer, some of them, coming to your hand for salt: their dark eyes wide and gleaming with the wonder and the fear we had all felt… at seeing so many people with whom they could fall in love. The old enchantment composed of lights, music, people was transfixing them for the first time, and it made their faces even more touching.

No longer relegated to adult bookstores, evocatively-named magazines (Honcho, Blueboy, Playguy, and Torso) and more forensically titled ones (Inches, Black Inches, Latin Inches) appeared, high up and out of children’s reach, in growing numbers of newsstand racks. Instead of posing straps, models wore skimpy Speedos, button-front jeans that invited undoing, leather gear, work boots, or nothing at all. While some gay periodicals and pic­torials still obsessed over hyper-masculinity, others featured men in more vulnerable poses, bathed in soft light and a luscious, fleshy palette.

The models featured in these new magazines—boy-next-door types like blond, smooth-skinned Casey Donovan and the sultry, hairier Al Parker—did not stare out of the frame and into the distance. Instead, they made direct and unapologetic eye contact, acknowledging their compelling physicality and facilitating the hand-jobs of readers positioned an arm’s length away.

Readily available magazines like these reflected (and contributed to) the growing eroticization of the public sphere. By 1982, the first of Bruce Weber’s homoerotic Calvin Klein underwear ads appeared on a Times Square billboard and underscored photography’s pivotal role in shaping desire and mainstreaming the sexual objectification of men. Increasingly explicit and sexually-charged photographs began to powerfully reflect and influence the culture, politics, and fantasies of gay life at the time. But in retrospect and today, they look and function differently. That is what Pacifico Silano’s work, based on vintage imagery from the period, knowingly and beautifully explores.

These new genres of images and magazines flourished a dozen years after the Stonewall riots. And a few years after that—once the discovery of AIDS, slowly reported, had quickly spiraled out of control—the seeds for a subsequent round of gay activism took hold. In stark contrast to the celebratory nature of seductive gay imagery, fear and a devastating sense of loss would grip the gay community. Drawn to and recycling seductive images of the period, Silano’s work in Tear Sheets reflects on that complex cultural moment: one he did not experience directly, yet one that irrevocably shaped him and, for that matter, the lives we live now.

Literally deconstructing the back issues of magazines he finds online—some currently sell for hundreds of dollars, so strong are buyers’ decades-old libidinal connections to them—Silano works as a cultural historian and artist. His photographic work features now-vintage ephemera, re-contextualized and reconsidered, that hints at the time’s pleasure and turmoil alike, the embedding of meaning and memory in images, and reminds us of our finite lives and the multiple lives of images.

Nostalgia is not the focus of Silano’s attention. But his fascination with a history that both is and isn’t his own gives this work its knowing, cumulative power. One after another, these haunting images remind us that, try as we might, it is impossible to recoup the past and even more difficult to see what’s coming.

Pacifico Silano's The Eyelid Has Its Storms… borrows its title from a Frank O’Hara poem.

O’Hara’s musings and observations about everyday queer life inspired Silano’s artistic practice. “The eyelid has its storms,” the poem begins. “There is the opaque fish-scale green of it after swimming in the sea and then suddenly wrenching violence, strangled lashed, and a barbed wire of sand falls onto the shore.” O’Hara’s deeply visual poem, like Silano’s work, evokes duality—in memory, in the present, and future, shimmering beauty and umbral violence often occur at once.

Through the appropriation of photographs from vintage gay pornography magazines, Silano creates colorful collages that explore print culture and the histories of the LGBTQ+ community. His large-scale works evoke strength and sexuality while acknowledging the underlying repression and trauma that marginalized individuals experience. Silano’s exhibition somberly contemplates such pain and photography’s role in the struggle for queer visibility, while celebrating enduring love, compassion, and community.

Born at the height of the AIDS epidemic, Silano lost his uncle due to complications from HIV. “After he died,” says Silano, “his memory was erased by my family due to the shame of his sexuality and the stigma of HIV/AIDS around that time period.” Silano set out to create art that reconciled that loss and erasure. Lacking family photographs of his uncle, he sought other means to explore his story. “I started to think about representations of gay identity from the time that he was alive and how I could reinterpret those images to talk about loss in a meaningful way.” Silano’s parents owned an adult novelty store aptly named “Undercover Pleasures” and Silano realized it made sense to create work using gay erotica. He began acquiring material online from collectors, particularly from magazines printed during the period from the 1969 Stonewall Riots through the mid-1980s.

In collaging, Silano decisively fragments, obscures, and layers images that he has rephotographed from these magazines. He reassembles and ultimately recontextualizes these images, removing the overtly explicit original content. By only implying sexuality, he instead draws our attention to details—soft portraits, crops of bodies, close-ups of skin, hair, beads of sweat. His collages also incorporate crops of domestic spaces and natural scenes from the backgrounds of centerfolds—picturesque landscapes, the ocean, and sunsets. Textural dot patterns arise from enlarged details of the offset-printed magazine pages, leading our eye to the surface of the images themselves. Silano’s large 2019 piece, Sure of You, reveals a multitude of overlayed cyan, magenta, yellow, and black dots that together create its subject at a distance: a single eyeball, gazing back at the viewer with lasting intensity.

“These new pictures-within-pictures are silent witnesses that allude to absence and presence,” says Silano. He sees them as stand-in memorials, both for the now-missing models as well as those who originally consumed their images. As this project evolves, Silano continues to push the source material further. Recently, Silano began adding large expansive vinyl on the walls behind framed works. These complicate the layering of the images, and allow new, shifting relationships and narratives to develop between the works. Silano explores the fragility of masculinity and how gay culture has depicted and adopted “clichés of idealized cowboys and tough leather men… [with] the idea that these men are fallible—they are not invincible and are actually capable of being vulnerable.”

Individuals, including artists, still struggle for visibility of LGBTQ+ life and culture. Silano has directly encountered censorship of his work. In 2018, Silano and José Diaz, Andy Warhol Museum chief curator, were selecting images for a public art project along the Bal Harbour beach path, some fifteen miles outside of Miami. Silano was amenable to adjustments where it made the exhibition stronger, of course, but after rounds of negotiations with public officials about the exhibition’s content, he and Diaz eventually felt that the city’s reductive “family-friendly” edit both compromised Silano’s artistic integrity and failed to represent the contemporary queer issues he wanted to address. The city claimed they simply needed to eliminate photographs of naked bodies, although Silano’s proposed exhibition contained no overt nudity. The city apparently also altered their press release, deleting the word “queer” and avoiding mention of gay adult magazines as the artist’s source material. Diaz and Silano eventually withdrew their proposal altogether. Reminiscent of Silano’s family erasure of his uncle’s memory, this unfortunate series of events exemplifies the systemic silencing and oppression that still occurs within institutions and culture today.

Silano meditates on the meaning of the images and tearsheets that he collects over time, knowing  that our relationship to the past constantly evolves and the definitions of these images remain fluid. What continually excites him, despite the artistic hurdles he has faced, is precisely that  “slipperiness” of representation and meaning in photography as our culture shifts. “The lens that we read [images] through today gives them
new context and meaning,” he observes. “In another 30 or 40 years, they might very well mean something completely different.”