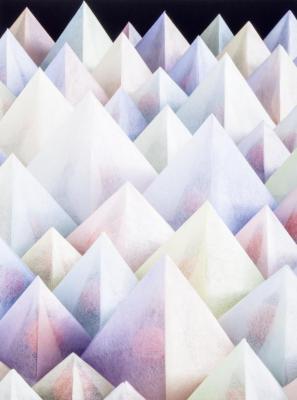 For a more recent CV or bio please visit the artist's website, http://www.mikisoejima.com

Literature is not innocent. It is guilty and
should admit itself so.

Mrs. Merryman’s Collection invites its audience to discover and drift through a collection of puzzling postcards, a series of uncanny documents and invitations to the voyage. If, to begin with, one is introduced to the collection solely through Anne Sophie Merryman’s prologue, the stage is set for an unfolding of images and fragments of stories, in which the thresholds between reality, the realm of dreams, and of the imagination appear elusive.

Old postcards are appealing objects in themselves because they are now the concrete relics of a once widely shared epistolary form of writing, a combination of words and images that have now migrated and mutated within the digital sphere. They are a particular semiotic object, imprinted with multiple layers and traces of visual culture, of collective and individual memory. However, the contrast between what we would expect from a collection of old postcards, and a grandmother’s collection in particular, and what is presented to us here, provokes a sense of mystery.

The photographs themselves are like fleeting and enigmatic visions. In one postcard, a myriad of monkeys have reached a mountaintop, rising up and gazing together towards an overwhelming light, as if magnetized by the energy and warmth of the rising sun, and responding to an archaic instinct, a primordial call, which seems to echo a feeling that is buried somewhere deep inside each of us as human beings. The postcard thus embodies the presence of a message, of an ancestral memory, addressed to us from an almost primitive and originary state. In a similar way, every postcard in the collection seems to be looking back at us, to borrow Georges Didi-Huberman’s phrase, and to address different places within our own mind. When in a postcard we see a luminous flying object, or energy source, rifting through dark space, forming shining paths and shock waves, or a cluster of eggs, which once contained gestating creatures, on display inside a vitrine, we ponder our place in the world, our actions and perceptions. The overall collection offers an idiosyncratic tour in which the evidence of life and death in this world, the possible existence of parallel ones, and the ambivalent presence of human beings and their doings, co-exist. No wonder a certain form of curiosity animates our eyes, what Baudelaire called the “ecstatic gaze of a child confronted with something new.”

Adding to that strangeness, the contrast between the images and the handwritten words inscribed on a number of postcards—whenever they are readable—produces another uncanny clash, while the iconography of the stamps seems to echo that of the photographs, hinting at correspondences between the two. And we wonder: who were these numerous anonymous photographers? What kind of dialogues did the senders and recipients have? What obscure desire or obsession pushed Mrs. Merryman to gather these kinds of images and pass them on to another generation? A reader might leave at this stage and carry away an unsettling sense of wonder of the images and the story. But if curiosity pushes someone to come back and look closer at the postcards and their details, the experience moves to a different phase. Gaps, inconsistencies and contradictions appear and proliferate as we eventually realize that a mise-en-scène has candidly and cruelly hijacked our mind.

The audience then enters into a form of play within a play, or a series of frames within the frames, in both visual and textual terms. The eventual appearance of the proper name of the artist, Miki Soejima, which takes the shape of a concealed signature, establishes a new reading contract. Unlike what occurs with the traditional use of a pseudonym, the idea of authorship is here suspended, or rather fragmented into a multiplicity
of anonymous voices, which together form a composite image of the collector’s intangible identity. Anne-Marie and Anne Sophie Merryman are more like the characters in a fable, echoing the tradition of anonymous fairy tales, with Anne Sophie stepping into real life through an actor to present the collection to the public. If the artist’s name may be seen as the key to the mystery of the story, it is a key only in so far as it opens the door to another dimension, to another journey, in which signs and images take precedence.

Mrs. Merryman’s Collection is an elusive creature within photography, taking the likeness of an uncanny apparition to become a fable and a performance, about the combined powers of narratives and photographic images, and about the threshold between reality and imagination.

Nicoló Giudice is a lecturer and photographer living in London, UK. www.nicologiudice.com

Miki Soejima lives in London, UK, and completed her residency at Light Work in January 2015. www.mikisoejima.com

With her photographic projects, Japanese artist Miki Soejima walks the line between fact and fiction, uncovering the inherent artifice and truths in images, the significance of authorship, and the power of suspended disbelief.

Soejima elaborated her latest project during her Light Work residency last year. The Passenger’s Present combines photographs made in Japan, in 2013 and 2014, with constructed still life images. Together, they allude to narratives, histories, and myths beneath the surface of Japanese society. They include images of a Kamikaze plane, a nuclear reactor, city street scenes, and reappearing rainbows. Soejima composed the still lifes in the studio with carefully folded paper abstractions. Some include small red spheres, which add weight amongst the light paper compositions, especially if one recognizes them as Atomic FireBalls, the American hard candy named after the atomic bomb.

For a viewer, it’s a not a simple or even singular story. Soejima invites us along as she finds significant moments in the movement of contemporary life and within the stillness of the paper compositions. We must listen closely to her photographs. As a third component, Soejima integrates images from her grandfather’s photo albums, made while he served in Japanese-occupied Manchuria from 1931-1945. She quotes his solemn declaration: “There is nothing to believe anymore.” This project’s underlying tension is war’s immeasurable devastation. Soejima’s images carry a feeling of hopelessness too. Even the recurring rainbows are somehow disconcerting. Soejima’s pictures probe deep into everyday moments where careful looking uncovers both beauty and a very real sadness.

Soejima also offers a few brief texts. Reading like short stories, these furnish what she calls “a key connection” among various threads in her work. “It is a threshold, a point of transition between present and the past,” she explains, “between different kinds of ideologies, and between collective and individual history.” Soejima questions both what the eyes of today see in the past and what future eyes might see in the present. In her overall practice, Soejima says literature influences her most. “I grew up with fictional stories, and they were always very important to me . . . from writers like Mikhail Bulgakov, Italo Calvino, or Gabriel Garcia Márquez. And Japanese literature . . . especially the early and mid-20th century writers like Saisei Murou, Kafu Nagai, and Soseki Natsume.”

An earlier project illuminates these depths. In 2012, “Anne Sophie Merryman” won the First Book Award in London for her photobook project, Mrs. Merryman's Collection. The book’s spine carries only that title—no author. Inside, a text begins: “My grandmother, Anne-Marie Merryman, was born in 1920 in London and died in 1980, the year I was born.” It’s a simple invitation to join her in imagining her grandmother’s life through an inherited box of postcards. Printed on the pages so that each turns to reveal the back of the card, the postcards appear authentically vintage. But after some time with them one realizes what an unusual collection it is. Some are strangely abstract, some have rather dark subject matter; placing just where she might have acquired them is a bit of a challenge. At the very end, an unassuming square of red stitches two pages together—something you’d spot only on second glance. If cut open, the text hidden inside reveals: “Mrs. Merryman’s Collection, a fiction by Miki Soejima.” Soejima created all of Mrs. Merryman’s postcards using her own photographs and fragments of real postcards. Sophie is herself another of Soejima’s creations. Perhaps all fictions are autobiographical to some degree, embedded with traces of lived experience.

Art making through alter egos and pseudonyms has a growing lineage: Marcel Duchamp’s “R.Mutt” signed urinal, 20th century image-makers like Gyula Halász (Brassaï) and Arthur Fellig (Weegee), YouTube advice dispenser Hennessy Youngman, street artists Banksy and JR, The Guerrilla Girls and The Yes Men—the list goes on. Recently, such photographic projects have surfaced. Martin Parr and John Gossage collaborated as “Obvious” and “Ordinary” in their 2006 book, America. Alec Soth’s Broken Manual (2013) and House of Coates (2014), the latter a collaboration with Brad Zeller, both use text or images by a “Lester B. Morrison,” whose actual existence has been heavily debated. Intriguing as the alter ego or pseudonym may be, the heteronym—a complete, imaginary character who goes beyond a false name, having their own physique, biography, and artistic style—is completely fascinating. Clearly this is rich territory for Miki Soejima.

“I think my core interest lies in how narrative context can shape our way of seeing the world and affect how we act," says Soejima. The thoughtfulness and care that went into Mrs. Merryman’s Collection is apparent in The Passenger’s Present. Both narratives are interpretive, and the idea of authorship recurs with the epilogue of photo album pictures, pairing another perspective and story with her own images. Soejima originally titled the project Dear Kameji Mizushima, a playful combination of her and her grand-father’s names. This tells us something about her initial vision for the project. Her still lifes are also captivating in their simplicity. Is it Soejima who is making these constructions to reflect her own thoughts and feelings? Do they represent her grandfather’s emotions? Or maybe an altogether newly imagined army vet living in America who practices Origami to cope with war-time memories? One cannot be certain. We might suspect that Soejima is the only one who really knows.