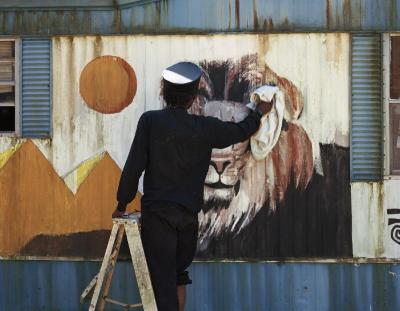 Artist Stamp and signtrure on back edition: 1/8

Morgan Ashcom is an artist and educator living in New York. Although he lives in a major metropolitan area his work is influenced by the Virginia landscape around the farm where he grew up. His first photobook, Leviathan, emerged from his experience at a remote community in southeast Ohio. While the photographs were made in the rolling hills of Appalachia, Morgan followed themes of escape and confrontation on the sea suggesting a narrative where these worlds have converged.

Since the completion of Leviathan, Morgan has been photographing an ongoing project titled What the Living Carry. Through a fictional and subjective photographic account, Morgan draws on the motif of the forest as a canvas for collective subconscious projections rooted in the literature and archetypes of rural America. Morgan Ashcom is currently a Visiting Lecturer at Cornell University and an Assistant Professor at Ithaca College where he teaches courses on Photography and Literature and The Photographic Book.

For his book, What the Living Carry, Morgan Ashcom relocates sixty-one photographs of real people and exterior scenes to Hoy’s Fork, an imaginary place in an invented southern county called Rivanna. As William Faulkner did with Yoknapatawpha, Morgan Ashcom constructs his mythical county atop a paradox: that we can neither recover nor escape the past. The past that haunts these images is explicitly cultural and, less overtly, psychological. Two images here reveal how well Ashcom uses a single spatial moment to imply a temporal narrative.

He juxtaposes a mural depicting an Indian and horse in front of a church under a bright blue sky against the washed-out colors of the town today. A mural of a heroic Africa cannot cover the weather-beaten boards on which it’s painted, nor the efforts of the black man on the ladder erase signs of decay. Faulkner-like, race recurs in Ashcom’s rep­resentation of the time and place. His subjects are mostly white, and he similarly visualizes their history as a fall into a diminished present. My favorite image is that of an elderly white man lounging on the steps of a once-grand home, the patched and peeling bases of two great white columns behind him and a champagne bottle beside him. But there seems to be nothing to celebrate.

American imagination often turns to nature to escape from history. Landscape provides the setting for about half of Ashcom’s images. Even there, he depicts a decidedly post-lapsarian world. The book’s first image is a house newly painted in colors suggesting the Mediterranean rather than the rural south, but around it loom the same vine-laden, often leafless trees that predominate the book’s second half—in the last image, those vines seem to cage the horse. This strangely haunted house visually establishes the idea of the narrative’s source of loss and mystery as personal and familial. Two pages later, a sign with the word “FAMILY” appears above a commercial scene. Significantly, the word returns on the book’s final image: a lonely street running under leafless branches toward the office of a roadside restaurant, with the sign, “FAMILY AFFAIR.”

No families are visible in this book. Ashcom photographs most of several dozen people here alone. But as they accumulate—adult men, children, the occasional woman—the book format’s linear logic creates the elusive hint of relationship among them. Ashcom also interpolates four letters written over thirteen months to a photographer named “Morgan” from “Eugene,” on stationery from a “Center for Epigenetics and Wellness of the Spirit.” Genetics reminds us that inevitably the living carry their familial past inside themselves. Epigenetics connects biology to environment. “Eugene” means well-born, of course, but Eugene seems stranded in his present. He never provides the DNA analysis Morgan requested, which is the apparent basis of their relationship. In the end, emerging from a dreamscape where he feels simultaneously at home and estranged, Eugene draws the map of Rivanna County that locates some places visited in the photographs. Turning the page to find that map is a wonderful moment, deepening the sense of mystery that accumulates through the book. The map provides a new way to engage with the images, leading us back into the past that is our experience of the book itself.

For me, the great achievements of Ashcom’s work are forms of paradox too. He uses an imaginary place to bring reality into greater resonant symbolic focus. He uses the cumulative structure of sequential relationships to sharpen our attention on individual images. He uses disparate images to imply a larger narrative—how, besides visually, is that boy sitting on a grassy bank with a Styrofoam cup connected to that old man on the steps? Ashcom suggests that linking acts of per­ception into “story” allows the living to locate themselves in a fragmented, enigmatic, foreboding world. Unable to recover or escape the past, perhaps we can understand it. We are not guaranteed such understanding, but Ashcom richly provides the means.

*What the Living Carry will be published by MACK in September 2017.

Stephen Railton is Professor of English at the University of Virginia. He has published widely on American liter­ature and for two decades been at the forefront of devel­oping digital humanities initiatives. Web projects include Mark Twain in His Times, Uncle Tom’s Cabin & American Culture, Absalom, Absalom! An Electronic Chro­nology, Faulkner At Virginia: An Audio Archive, and
The Digital Yoknapatawpha Project.

Morgan Ashcom is an artist and educator living in Charlottesville, VA, and completed his residency at Light Work in August 2016.