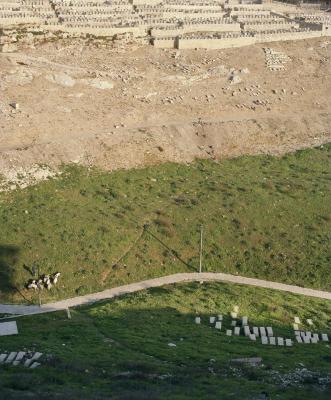 Regine Petersen’s work explores the relationship between history, storytelling and myth, while using photography as a personal vehicle for contemplation. In "Find a Fallen Star", she visited sites of meteorite falls around the world, delving into the stories of eye witnesses and expanding upon her own photographic observations through found documents and interviews. In her ongoing project “Son of a God” she follows the trail of a demon called “Legion” from the Gospel of Mark. The work engages with allegorical and postcolonial readings of the earliest gospel and employs the representational layers of both the text and the photographic image.

Regine Petersen (born 1976 in Hamburg, Germany) holds a Diploma in Communication Design from the University of Applied Sciences, Hamburg and an MA in Fine Art / Photography from the Royal College of Art, London. Her work has been exhibited internationally, with solo shows at Foam Museum, Amsterdam / Netherlands (2015), Photoforum PasquArt, Biel / Switzerland (2015) and Museum of Photography, Brunswick / Germany (2016). She is a recipient of the National Media Museum Bursary UK (2010), the Alfried Krupp von Bohlen and Halbach Foundation Grant (2012) and the Outset / Unseen Exhibition Fund (2014). Her publication “Find a Fallen Star” (Kehrer Verlag) received the German Photobook Award in 2015.

The only philosophy which would still be accountable in the face of despair, would be the attempt to consider all things, as they would be portrayed from the standpoint of redemption. Cognition has no other light than that which shines from redemption out upon the world…. Perspectives must be produced which set the world beside itself, alienated from itself, revealing its cracks and fissures, as needy and distorted as it will one day lay there in the messianic light.

The Gospel of Mark was composed around the year 70, at the end of the Roman-Jewish War or shortly thereafter. It is the oldest account of the story of a certain Jesus of Nazareth, a Jewish teacher and miracle worker crucified by the Romans a generation prior. Some people (including Mark) believed he was the son of God.

A paradox confronted Mark. Most likely this paradox brought the genre “Gospel” into existence. Forty years after the first proclamation of the “Good news of Jesus Christ,” his followers witnessed the exact opposite of their initial expectations. Instead of seeing the beginning of God’s kingdom on earth, they saw the destruction of Jerusalem and God's holy temple. The Romans slaughtered tens of thousands of rebellious Jews, sold a similar number into slavery, and the defeat of death and tyranny seemed further away than ever.

For the Jewish people, the destruction of Jerusalem was traumatic, as it was for early Christian groups who were either Jews themselves or felt akin to them. The crisis that confronted them was whether the gospel’s resurrection―their own message―was just an illusion and Jesus a false messiah like many others.

The Gospel of Mark responded by putting the tradition to a stress-test, reevaluating the story of Jesus Christ in light of a new situation. Mark portrayed Jesus, and extensively, in his suffering, creating a poetic entanglement of Jesus-as-remembered and the Jewish people’s actual experience. Telling the story of a single Jew crucified by the Romans outside Jerusalem, Mark simultaneously offers an allegory of the war’s events. For the first audience of Mark’s passion narrative, it would have been impossible not to think of the Romans crucifying large numbers of captured Jews within sight of the city in their aim to drive beleaguered, rebellious Jerusalem into despair.

Likewise, Mark's stories at Lake Gennesaret (the Sea of Galilee), would have evoked events that took place during the war’s first period. In the summer of 68, Roman troops had massacred a large Jewish crowd who had fled by boat into the middle of the same lake. The Jewish historian Flavius Josephus parallels this massacre to the destruction of Jerusalem. For Mark, the lake is the site of some of Jesus' greatest miracles (the calming of the storm, Jesus walking on the water). But their master’s powers did not delight the disciples, who reacted in panic and bewilderment, believing Jesus was a ghost.

In its outcome, one could read Mark’s gospel as the record of a balancing act. The text does avoid abandoning all hope and accepting death’s universal reign. It does emphasize proclaiming the “Gospel of Jesus Christ, the Son of God” (Mark 1:1). But the text also avoids escapism and settling down in the realm of religious illusion. This creates a tension nearly breaking the text. Whether one looks at the disciples’ reactions, Jesus’ grievance in Gethsemane, or his cry of despair from the cross, Mark’s is a gospel of terror and fear. Consequently, for a pious Christian mind, the story’s original ending must have come as a shock. When the women at the empty tomb receive the proclamation of the good news, they “fled from the tomb, for terror and amazement had seized them; and they said nothing to anyone, for they were afraid.”

Mark’s shaping of his gospel pushes the “good news” close to the abyss, perhaps even over the edge. For later generations of Christians, this was too much to bear. Matthew and Luke intended to replace Marks’s story of Jesus by offering alternative versions, and in the 2nd century a new ending was added to Mark 16:8 to neutralize its devastating effect.

Dr. Andreas Bedenbender is a New Testament scholar, pastor and editor-in-chief of the journal Texte & Kontexte.

Regine Petersen lives in Hamburg, Germany, and completed her residency in September 2016