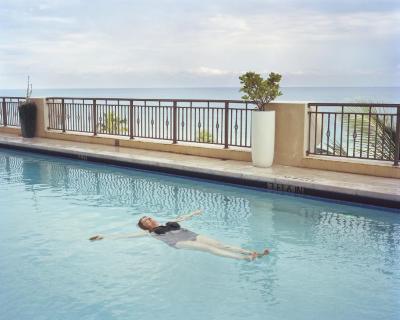 For a more recent CV or bio please visit the artist's website, http://www.saramacel.com/

Sara Macel received her MFA in Photography, Video & Related Media at the School of Visual Arts in 2011 and her BFA in Photography + Imaging from New York University’s Tisch School of the Arts in 2003. Her work has been internationally exhibited and is in various private collections, including the Museum of Fine Arts Houston, Cleveland Museum of Art, Harry Ransom Center, and the Center of Photography at Woodstock. Sara was named one of PDN’s 30 Photographers to Watch in 2015 and recently received the Individual Photographer’s Fellowship Grant from the Aaron Siskind Foundation and the Stanley Franzos Award for Emerging Photographer of the Year. Her first monograph, “May the Road Rise to Meet You,” was published by Daylight Books in 2013. A traveling exhibition of that work was shown in solo shows at the Center for Photography in Woodstock, Houston Center for Photography, and Silver Eye Center for Photography. In addition to her freelance work, Sara currently teaches photography at SUNY Rockland and CUNY Kingsborough. She was an artist-in-residence at The Wassaic Project in upstate New York and at Flash Powder Retreats in Astoria, Oregon. Sara is co-director of the Brooklyn chapter of the photo non-profit Crusade for Art that works to connect new audiences with emerging fine art photography in the Brooklyn/NYC area.

Silence and shame are contagious; so are courage and speech…A brick is knocked loose, another one; a dam breaks, the waters rush forth.

―Rebecca Solnit, The Mother of All Questions

Women have received increasing public attention over the past two years for the things we did not say. As women, we inherit double lives―one that we show the world, another we tuck away. Sara Macel’s What Did the Deep Sea Say seeks to uncover the unspoken histories of her mother and grandmother to understand the implications they have for her own life. This project began when she discovered her grandmother Carolyn’s hidden suitcase of photographs and unprinted negatives from a time in her life her family knew nothing about—her life before marriage. This intimate archive of self-portraits, photographs of neighborhood walks, trips to the beach, friends at lunch, twin beds pressed together, and of a recurring man, someone we must assume, through his piercing gaze and tender smile, she loved.

That Carolyn thoroughly documented but never shared this part of her life with her immediate family emphasizes one side of the silence we experience as women. At the very least, Carolyn saw no value in printing or sharing these photographs; at worst, she feared some repercussion. Macel, keenly aware of this duality, disagrees. She understands this project goes beyond Carolyn’s past life; it’s about how secrecy shapes the lives of those closest to us, generation after generation.

Macel uses the suitcase as a map through the balmy Gulf Coast beachscape of Hollywood, Florida. “Hollywood by the Sea” was once a resort town meant to embody the glamour and cinematic style of its namesake in the California hills. Macel’s nostalgic photographs depict a place that seems a bit lost in time, never fully realizing its aspirations. Hollywood emerges here as a symbol of her grandmother’s unfulfilled desires to chart a new life, different from her more conservative upbringing in the Northeast. A handsome man, who we learn is Father Jim, becomes the narrative’s quintessential dreamboat, leading Macel’s swimsuit-clad grandmother into one body of water after another, like baptisms that will eventually give way to a new and perhaps more acceptable life.

Water becomes this story’s hiding place and keeper, occasionally washing away but persistently reminding us that it exists, if only in the deepest places. Like the hotel curtains Macel and her mother peer past, the water is a veil standing between the truth we live and the truth we present―at once deceptive and protective of our status as women. It also hints at women’s invisibility after they complete their child-rearing years. Repeatedly, Macel gives us images of her mother covering her eyes or looking through objects bifurcated by reflections. In placing her grandmother’s archive in conversation with her mother’s life and her own, however, Macel’s project overcomes the loneliness there is to being a woman when the prescribed “women’s work” is done. This is a task of so much possibility. Like Macel’s photographs, her grandmother’s are expertly composed and even experimental. They go beyond simple snapshots to reflect on a part of her life she seems to know she will have to leave behind.

One of Carolyn’s most compelling photographs is a composite that employs a double exposure of a woman split in two by a second, vertical image of a young boy standing in front of a dirt road. While it obscures the identity of the woman as well as the child, it reveals, even if only by haunting coincidence, the doubly exposed nature of her life. She is never just alone, smiling in front of the stucco home and manicured lawn. From the center of her body, a path radiates outward, and around her appears the figure of a child. It’s as if the photograph predicts that her choice to marry and have a child will ultimately obscure, and render nearly illegible, her own perception of self.

Where does that leave Macel? Whether she’s floating in a motel pool or running into the waves, Macel shows us her own, forceful agency through her self-portraits. She understands now, more than ever, the deliberate and powerful nature of her choices. She chooses to tell the story. What Did the Deep Sea Say reminds us that we have much work to do—and we always will. We have many archives and untold stories to uncover. Macel is at the forefront of a growing community of young photographers and historians excavating these photographic histories and allowing us to understand ourselves and the medium’s cultural implications in new ways. She asks the waters to rush forth.

Sara Macel lives in New York, NY, and completed her residency in July, 2017.

Ashlyn Davis is a writer and Executive Director of the Houston Center for Photography. www.hcponline.org