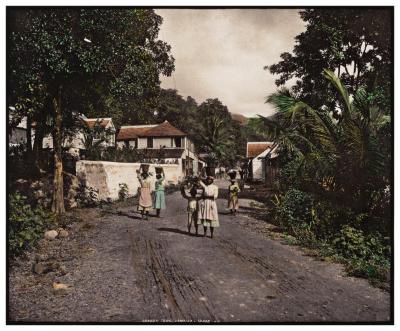 Ingrid Pollard was born in Georgetown, Guyana and moved to England when she was four years old. Since then she has lived in London working as a photographer, printer, media artist and researcher. She is a graduate of the London College of Printing and Derby University. Pollard was part of significant collaborative ventures between black British photographers, including Polareyes, D-Max and the Association of Black Photographers (now Autograph ABP), of which she was a founding member. Ingrid Pollard has developed a practice concerned with representation, history, and landscape with reference to race, difference and the materiality of lens-based media. Her work is included in numerous collections including the UK Arts Council and the Victoria & Albert Museum. In 2007, Pollard was awarded the Leverhulme Fellowship Award. She is an Honorary Fellow of the Royal Photographic Society and received her doctorate-by-publication from the University of Westminster in 2016. Her work is represented in the collections of Tate Britain, the Victoria and Albert Museum, Cartwright Hall, Bradford, and Arts Council England.

Early British photographic pioneers Peter Henry Emerson, Sir John Frederick William Herschel, Henry Peach Robinson, and William Henry Fox Talbot turned their crude cameras on the British countryside, a frequented subject of eighteenth and nineteenth century British artists. Through these early photogenic drawings, cyanotypes, salt paper prints, platinum and palladium prints these image makers set out to create a unique photographic aesthetic as well as to emulate existing ones. Emerson, a proponent of the naturalist aesthetic, considered any experiments in image manipulation and alternative photographic processes to be an affront to natural landscape image. In his nineteenth century treatise Naturalistic Photography for Students of the Art (1889) Emerson wrote '... no one but a vandal would print a landscape in red, or in cyanotype.' Contemporary British photographer Ingrid Pollard is aware of these aesthetic traditions, and uses them as a point of departure in her work, which has often uses the British landscape as its subject.

In the work produced during her residency at Light Work, Pollard chose to work in cyanotype, one of the earliest processes of photographic mark marking, taking advantage of its association with early photographic imagery, architectural blueprinting, and defiance of the traditional landscape photograph. In the images reproduced here from the Monument series Pollard juxtaposes seemingly unrelated forms and surfaces-an architectural detail or a fragment a of statue or perhaps tombstone-that suggest a commemoration to something noteworthy, or merely remnants of something in the past. Through abstracted forms of barren environments Pollard, in the triptych Ugly, plays off our assumptions of beauty found in nature. The titles of both series further manipulate our assumptions of what we are looking at as much as the selection of images does.

Pollard does not work exclusively in the domain of landscape photography, she has distinguished herself through a variety of projects and public commissions which explore the use of land and the people who occupy it. Projects such as, Hidden Histories, Heritage Stories; Bursting Stone; and By Way of Beachy Head raise questions about access and the traditions of representation in landscape imagery. In her projects Pastoral Interlude and Wordsworth Heritage Pollard draws attention to unconscious racism in British society by placing black subjects in the Lake District region-what could be considered a 'quintessentially white' British landscape.

Pollard investigates not only the space but the history embedded in the landscape . People are not always visible in her images, but their presence is apparent through the changes made to the landscape. In the essay Looking Along the Edge that accompanied Pollard's Bursting Stone series John Taylor wrote, 'In Britain, especially, the borders and boundaries of space are well signed, and pictorial conventions well understood. Tourists have few opportunities to trespass unknowingly, or take 'incorrect' tourist snaps. But social order and picture-making can be ambiguous. While it is easy for outsiders to behave improperly and never know it, insiders like Ingrid Pollard misbehave knowing full well what games they play. Pollard uses an anti-picturesque 'bad language' of blockage and spoiled vistas to indicate her unease.' Pollard subverts our expectations of the landscape photograph through her deliberate intervention-editing and grouping images, applying selective color, or working in cyanotype-manipulating the way in which the spectator approaches the image and governing what is hidden and what is revealed.

Black British photographer Ingrid Pollard’s celebrated work focuses on “race,” identity, and belonging. Whose memories and histories have we forgotten? Her recent work takes her to the Caribbean. Native to Guyana but now living many years in London, she has lately engaged with and responded to late-19th century representations of Jamaica. In 1893 the Jamaica Pavilion at the World’s Fair featured a series of photographs that a group of businessmen had commissioned. They hoped portraying Jamaica as a paradise for tourism and commerce alike might encourage new investment and rescue the island’s economy. In 2017, Autograph ABP exhibited images from this series at its Rivington Place home, along with Pollard’s commissioned response.

The “Valentine photographs” belong to a tradition of representation dating from the colonial period. The British slave-owners who dominated plantation society in Jamaica wanted to establish a picture of the island as beautiful and prosperous, a place to make a fortune and live a good life. They encouraged white settlement and actively countered negative accounts of slavery. Edward Long’s History of Jamaica (1774), for example, aimed to convince a metropolitan audience that slavery was essential to British prosperity. Long waxed lyrical on the island’s beauties, aestheticizing the landscape, rendering it both familiar and exotic, pastoral and tropical. In the engravings that illustrated Long’s book, the heavy labor associated with sugar production disappeared, reducing the few black figures to tiny dots. Meanwhile, abolitionists circulated reports of cruelty and death on the plantations in their efforts to mobilize popular support for emancipation. Both sides engaged in this war of representation over slavery.

Pollard’s hand-tinted re-workings of the Valentine photographs address these struggles. Countering the lure of tourism and commerce, they foreground black men and women while remaining alert to the Jamaican landscape’s extraordinary beauty. Crossing a River shows us men at work, washing, driving horses and a cart loaded with heavy bundles, perhaps taking sugar down to one of the ports. Many estates were situated in fertile inland areas. Long journeys to the coast meant crossing often unnavigable rivers and taking carts on bumpy tracks. The countryside is glorious, with its dense bush and royal palms, but the fencing vividly reminds us that private property was key to the entire system of racial capitalism. A river scene with two figures on the raft evokes the Rio Grande, where rafting is now a major tourist attraction, but this image focuses on the man and the woman living their lives in this magnificent landscape. Kingston From Harbor reminds us of the island’s strategic position as the major port for disembarking slaving ships and sending the sugar and rum to the metropole. The harbor now looks calm, with no visible traces of the brutal and frenetic scenes of the past. But haunting thoughts can surface about wealth’s generation here: what did they store in those large sheds?

Gordon Town evokes rural Jamaica, with its steep roads leading out of the city toward the Blue Mountains, now celebrated online as the beginning of a spectacular trail to the luxury hotel at Strawberry Hill. Pollard’s image directs the eye to the black working women, with their buckets on their heads, perhaps carrying water. Respectably dressed with their longish skirts, they have aprons and hats to protect them from the sun, but bare feet, a reminder of poverty. These neat dwellings might have belonged to the more prosperous in the town: tradesmen, pharmacists, teachers, and preachers. Woman with Pipe gives us glimpses of a marketplace, possibly Papine, down the track from Gordon Town. Shadowy figures of women in white move behind her―perhaps this is a Sunday? She watches what we cannot see, while the cockerel looks at her, its black feathers and red cockscomb resplendent, reminding us of the significance of obeah and spirit lives for working people. The woman and girl on the steps in an untitled image are probably domestics in the house behind them, black skinned servants for the well-to-do “browns.” Laboring in their kitchens, they dressed in uniforms to wait at table and serve drinks on the veranda for their “betters,” and sometimes lived in the “maid’s room” behind the kitchen or returned at night to the shacks in Kingston’s ghettoes.

Thus Pollard invites us to reflect on the lives of ordinary men and women in urban and rural Jamaica, to ask questions about the past and the ways it lives on in the persistent inequalities of the present.

Ingrid Pollard lives in London, UK, and completed her residency at Light Work in December 2017.

Catherine Hall is an historian of Britain and empire and chair of the Centre for the Study of British Slave-ownership at University College London. www.ucl.ac.uk/lbs