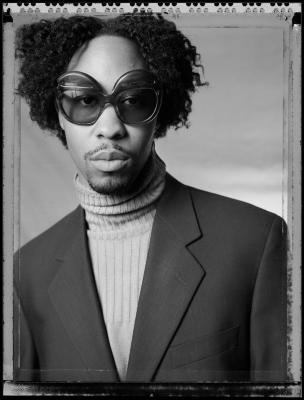 Gerard H. Gaskin does not have to travel to make his series Lefrak City, but if the portraits feel international, there is a reason. Many of the 14,000-plus residents of the forty acre housing complex come from some- where else. Gaskin has lived in Lefrak City for the past thirty-three years, arriving himself as a boy from Trini- dad to settle amidst the twenty eighteen-story build- ings in Queens, NY. Each portrait is a tiny sentence that makes up the chapter of his neighborhood.

The work is largely centered around immigrant stories. Each subject is selected to represent a par- ticular community subgroup that lives in Lefrak City; Gaskin may photograph in one afternoon, for example, a young Latina mother, a young African-American man, an older African man, and an older Russian man. These people, he says, may not always get along, or they may be friends, but either way they have to negotiate the same small space of Lefrak City together.

Gaskin elicits this sense of shared personal space by photographing some of his subjects at a distance, and some just a few inches from the face, so that viewers must engage with the people in Lefrak City in an immediate, and sometimes uncomfortable, way. The idea of “safe space” is always in flux in the city, as residents can occasionally breathe easy within an empty city block, but in the next moment be pressed body-to-body in a crowded elevator. (Gaskin does not employ this technique when he photographs his sister’s neighborhood in Alabama where, he says, neighbors only see one another once every few days and are very rarely pushed to meet a gaze in close proximity.)

This forced intimacy with difference and diver- sity characterizes Gaskin’s work and his upbringing in Lefrak City. Arriving from a small island in the late 1970s, Gaskin felt the world open up to him. There

were families and kids from India, China, many Afri- can countries, Russia, and elsewhere, and hearing their stories allowed him to believe he could go anywhere. Being in a multicultural space was rare and precious, he felt, and he spent many years of his young adult- hood wanting to photograph his neighborhood.

But he was not ready. Gaskin believes it is a big responsibility to photograph where you live, and it took nearly twenty years of professional photography before he turned the lens on his neighbors. Gaskin’s caution is well founded. With localized photography, expecta- tions are often high and unrealistic. Some of his sub- jects expect him to produce a book, with themselves as featured stars, by next week. Others are wary of his intentions and nervous about exploitation. Either way, he cannot escape his subjects and their queries, as he lives and works among them every day.

Still, it is the everydayness about the project— working class and immigrant people, simply stopped while shopping on the street, or in the parking lot on the way to church—that Gaskin most wants to capture. This idea of imaging “regular people” is in some ways reminiscent of Richard Avedon, who raises the notion that anything and everything is potential art, with his iconic portraits of presidents and kings, as well as ordi- nary Americans in New Mexico and Montana. Gaskin is also influenced by photographer Dawoud Bey, who utilizes street scenes and the natural environment in his portraiture. Like Bey, who documented everyday life in Harlem, Gaskin focuses on a particular neighborhood and works to surpass cultural stereotypes by photo- graphing a wide range of people in a small sphere.

Gaskin rarely asks a subject to shift from where he or she is already sitting or standing; he sees a moment and wants to grab it, though he always takes

time setting up his camera and chatting with his sub- jects to get them comfortable. Usually they talk about Lefrak City, how it touches their lives, and many of the pictures present some kind of interplay between the person and his or her environment. The picture of the man in the suit, for instance, is a study in contrasts: Here is a man considered pretty big by most standards. But in Lefrak City, unlike other residential areas in New York with their six-story building caps, he is dwarfed by the enormous buildings behind him, and one may won- der how he works to forge a self amidst such a large and varied community. In another image, two kids stand in front of one of the many elevated walkways that con- nect the buildings in the housing complex, symboliz- ing, perhaps, the connections between the people in this international neighborhood. The kids are wearing Puerto Rican flags as bandanas and are heading out to the Puerto Rican Day parade, for their own connec- tion to another kind of home. The woman with the dog stands on an empty sidewalk proving that there can be a kind of openness and space in Lefrak City too.

The one consistent detail in Gaskin’s Lefrak City series is his angle: He shoots his portraits from slightly below the subjects’ gaze. By directing his camera this way, the artist infuses a subtle sense of pride into the faces of his subjects. Gaskin is proud to be from Lefrak City, and this project echoes the affinity.

Cris Beam is the author of Transparent: Love Family and Living the T with Transgender Teenagers. She is a professor of creative writing at Columbia University in New York City.