Karen Miranda Rivadeneira
My Mom Keeping Me Close Since 1983, 2011 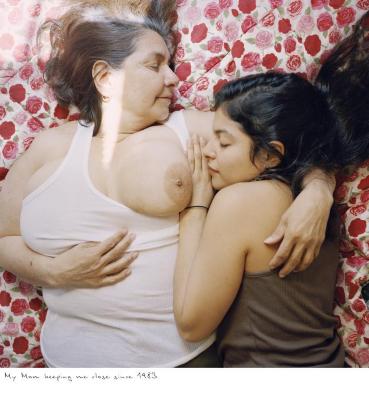 Mom Always Trying to Keep Me Close, Since 1983

I am a graduate from the school of visual arts with a bachelor in fine arts in 05’; during those years I focused on performance art, trance states and native traditions. In all of my projects there is a direct collaboration with the communities, tribes, groups that I photograph.

My personal background and the places that I tend to gravitate to, from the Amazon to the Andes to the Pueblos in the American southwest, often inform what I capture. My work often draws connection with these places and cultures in a way that is ontological, ethnological and reflective. I dig in caves, looking for psychic gold, in there I thread personal and collective narratives to explore the peripheries of memory, storytelling and perception while encountering the myriads of ways in which photography can create platforms for diversion and reflection.

Seeing is not always knowing. In the space between presenting realities and representing possibilities meaning gets constructed and construed through past experience, symbols and signs. The indelible impressions caused on the mental landscape through years of religious canonization makes the body forget its basics; we are all made of blood, salt, oil, water, milk and a wild imagination. Ultimately, I am interested in pointing to a form that is far more subjective, permeable and open-ended.

In the fragile memory of time and the stories imprinted in my bones, I search for truths that evoke a wider dialogue and contemplation.

With her recent series of images, Objects of Transportation, Karen Miranda-Rivadeneira refers as much to the immensity of geologic or astronomical movement as to the human practice of using objects rooted in the earth to move from quotidian realities to metaphysical realms. She has combined photography with drawing in this work as a means of constructing images that link many of the artist’s preoccupations – history, culture, and mythology (themes she has explored in previous bodies of work) as well as scientific fields.  Photography provides the artist with a direct, objective presentation of the stones and crystals that act as the point of departure for this series. And with drawing, she infuses each image with passages of imaginative musing and with symbols that evoke the way humankind finds spiritual meaning in objects and phenomena in nature. Indeed, it is through the pairing of distinct visual media (one dependent on technology, the other on direct, physical expression) that Miranda can so cogently picture a kind of holistic view of nature and culture, one that embraces the stones’ physical properties and geologic composition as well as the transcendent meaning that cultures throughout time have drawn from them.

On a formal level, Objects of Transportation represents a significant departure for the artist. Miranda’s early photographic work, documentary in nature, gave way to narrative images that she has pursued over the last few years focusing on the themes of memory and cultural identity. Her best-known body of work, Other Stories, is comprised of staged scenes, remembrances of events in her childhood and adolescence poignantly reenacted by Miranda and members of her immediate family. The images and accompanying handwritten texts are emotionally powerful in their desire to come to terms with intimate, sometimes painful memories. With Objects of Transportation she has devised a wholly different approach to image making, one that is compositionally spare yet richly evoking the symbolic language of myth.

At the center of each image is a photograph of a rare crystal and meteorite, objects that connote a palpable connection to the earth and cosmos. [LG1] Miranda depicts each rock in actual size, isolated in the center of a large sheet of photographic paper. She chose the specific stones – a Lemurian quartz crystal, boji stone, and moonstone among them – because of the folkloric legends and teachings or metaphysical qualities that various cultures have associated with them. In Boji Meteorite, she depicts a stone found in hilly outcroppings in Kansas and in other parts of the Midwest, one that is used in healing rituals. Miranda also creates a symbol of [LG2] a Native American belief of this region[EF3] : The stones entered the earth with such force that when they landed, they flew back into the heavens and then came down again to settle permanently. Miranda’s simple line drawing below the photograph depicts a mountain landscape and the stones’ path as they travel skyward. The drawing is meant to provide only hints of a story – the artist intends such images to also act as an entry point for the viewer’s own interpretations and associations.

Another work is dedicated to the Lemurian stone, a jagged, nearly transparent crystal incised with markings. According to legend, the markings preserve the highly evolved knowledge of a mythical civilization that was thought to have resided on an Eden-like continent destroyed by a cataclysmic event in pre-historic times. Miranda pairs the photograph of the stone with rows of small drawn forms, a kind of obsessive nonsense writing that originated in an artist’s book she created years ago, uncannily, long before she developed an interest in this subject matter. These graphic forms endow the work with a mystical air – it appears simultaneously like coded message and as a kind of inscrutable, stream-of-thought system of mark making.

With its inventive merging of drawing and photography, Objects of Transportation ultimately becomes a meditation on how we know and how we believe. The first is dependent on sight, observation, and empirical or rational measures; the second is much more complicated, and is as dependent on the culture that forms us as on the idiosyncrasies of our individual psyches.  Through these images, Karen Miranda illuminates a pictorial space that encompasses this essential dichotomy of contemporary existence – science and objectivity, spirituality, magic, and faith are all present. These images remind us of the very earliest known art works – also representations of nature – that sought to record and behold and, as well, to comprehend the physical world and spirit worlds as one.