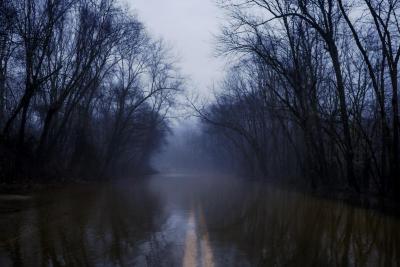 This print is 1/50 of a limited edition of signed and numbered prints made by the artist for Light Work's Fine Print Program. Since 1991 Light Work has sold limited edition prints to benefit all of our activities. The generosity of our former artists and friends makes it possible for us to continue our support of emerging and under recognized artists working in photography and related media.

For a more recent CV or bio please visit the artist's website, http://www.matteichphoto.com

Matt Eich (b. Richmond, Virginia, 1986) is a photographic essayist working on long-form projects related to memory, family, community, and the American condition. Matt's projects have received support from an Aaron Siskind Individual Photographer's Fellowship, a VMFA Professional Visual Arts Fellowship, and two Getty Images Grants for Editorial Photography. Eich was an artist in residence at Light Work in 2013 and is invited to a Robert Rauschenberg Residency in 2019. He teaches photography at The George Washington University in Washington, DC. Matt accepts commissions and resides in Charlottesville, Virginia with his family.

From Southeast Ohio to the Gulf Coast to Hampton Roads, Virginia, Matt Eich has spent the better part of his twenty-seven years taking photographs that explore race and class in America. But Eich, a photojournalist by training, is as intent on making relationships with his subjects as he is on taking pictures. To make possible his self-described “social practice,” the photographer embeds himself with his subjects for long stretches, returning repeatedly to the same communities of Mississippi, coastal Louisiana, and rural Ohio to make the photographs shown here.

While themes of race and class unite this work, Eich explores these topics more specifically through his subjects’ relationships with nature. As an example, the hushed, dark, forest-green light of On the corner, Greenwood, Mississippi (2010), verdant trees hugging the background, and robust hedge that looks as if it is growing out of (or into) a porch, suggest that the boundaries between the natural and domestic worlds have collapsed. A young man alone at the stop sign, dwarfed by the shrub to his back, seems no match for the ascendance of nature.

By contrast, human meets nature more brutally in Double-tap, Shell Island, Louisiana, which Eich took just after an alligator hunter shot one such reptile with a handgun. Blood spatters the  animal’s head and the bow of the boat beneath it. Thehunter’s camouflaged sleeve is just visible; a tattoo covers the bulk of his forearm. On first blush, the photograph’s violence is most salient, what the picture looks most to be “about.” But on closer inspection, the image reveals itself to be as much about the decisive moment of the alligator’s death as the economy behind the picture: alligator-hunting, a major business in Louisiana; the luxury end-uses of alligator skin, another billion-dollar industry, but one that (seemingly) operates a universe away from the savagery expressed in the image. The high and low, the two Americas that the photograph evokes are what make this a twenty-first century American picture; its freshness derives from Eich’s unflinching focus on the alligator, not the hunter.

In another image, Calling the hounds after cocktail hour, a young man leads a pack of dogs, as if toward a hunt. He wears a creased and stained short-sleeved white button-up, tan workman’s trousers, multiple watches, and holds a can in a camouflage beer cozy. Over one shoulder he carries a wooden tool (a rifle? a riding crop?). A grassy field opens up behind him, a patch of trees beyond it. The sky is streaked with pink. He looks part of the natural world because of his clothes and sandy hair, which are the same colors as the dogs’ coats; his natural-hewn, old-fashioned-looking weapon; and his turn away from the viewer to whistle to his animals. When seen beside the frank, modern death in the alligator photo, this idealized, pastoral scene looks almost fictional, staged, a Norman Rockwell-like portrait of the hunt, though it is not.

Other images focus exclusively on the animal. Elvis the zebra, Cumberland, Ohio, shows a zebra mid-stride, enclosed on three sides by a wooden fence. The ground is snowy, and snow is still coming down; flakes appear to have gathered on the animal’s tufted ears. The juxtaposition between the zebra and the snow is unexpected, and — like the alligator image — immediately commands our attention. But it is the fact of the zebra in a simple wooden pen, as if a pet kept in someone’s backyard, that keeps us looking. In these ways, the photograph calls attention to our heuristic associations with zebras (exotic, hot weather, plains of Africa) while the simple wooden fence conjures the kinds of people who might keep a wild animal at home — themselves stand-ins for stereotypes of race and class. (In truth, Eich says, the zebra lives at a conservation facility for rare and endangered animals, some 10,000 acres of former strip mine.)

Taken together, these pictures of nature read as late-stage Manifest Destiny, a distant cousin to Teddy Roosevelt’s conservation movement, with its roots in corralling nature to our will. It is this largely adversarial relationship with the environment that lends the photographs their uniquely American character. At the same time, as the images attest, the ways that twenty-first-century Americans are “living nature” depend upon, and are largely emblematic of, our vast
differences in culture, race, and class.

Rachel Somerstein is a PhD candidate in Mass Communications at Syracuse University. In September, she will be joining SUNY New Paltz as assistant professor of journalism.

Matt Eich lives in Norfolk, VA, and completed his residency at Light Work in July 2013.