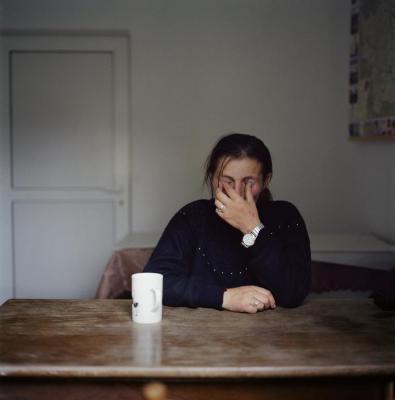 No one sits on the leopard-covered seats in the front of the car. There is no one walking down the dim concrete stairs in someone’s apartment building. Wisps of a woman’s hair touch her neck but her face is hidden. A diaphanous curtain shows a woman’s silhouette in front of a window whose white light leads us nowhere. One woman faces us. Her fingers cover her eyes, and her hand hides half of her face.

The pictures have few clues, just shadows and light, and the unsettling quality of the color in the images. In the peeling concrete walls and the shabby materials. In the absence of anything that seems to belong to anyone, there is the silence of space that hides what happens there. The facts are not exactly hidden from us, but it is hard to look at them all the time or even very often, particularly the statistics.

A quarter to one half of all women I the world have been abused by intimate partners. Worldwide, 40-70% of all female murder victims are killed by an intimate partner. In the US, one in five women is a victim of domestic violence. Approximately 1,200 women dies every year from domestic violence. In the UK, 100,000 women are raped every year. Half these rapes are committed by a current or former partner. Two women are killed every week by a current or former partner. In Spain, at least one woman dies every week at the hands of her partner. In Russia, it is said that domestic violence is a silent crisis, one of the country’s darkest secrets. An estimated 14,000 Russian women are killed every year by partners or other family members.

If he beats you, he loves you.

Despite more NGO’s and newly trained police investigators trying to stem domestic violence, it continues everywhere, in fear and silence.

“Father, he beats me up every day. I cannot go on like this forever. He beats me up so badly, I fear for my life.”

“You will die, but you will die a hero,” says the village priest comforting the women who seek advice from the only authority they trust.

Dana Popa began this project because as a child in Romnia, she grew up hearing about wife beating: “No one would interfere in someone else’s family relationships, not even a family that was close. We used to hear stories about our women teachers being abused or male teachers known to abuse their wives. It was the same with neighbors in our block of flats.”

“In 2011, I started this work in Romania. With the help of the police, I found women who had experienced domestic violence for years on end. Death by domestic violence is what make the five o’clock news in Romania today. It is said that every thirty seconds a woman is physically abused by her partner. We say; Where the husband shits his wife, her flesh becomes more tender.”

“Hardly any NGOs offer more than a shelter for a short period of time. The mentality of escaping abuse doesn’t exist. Divorce is not an option, religion doesn’t support it. Abused women want to protect their children against the stigma of divorce or a broken family. Abused women have nowhere to go. They are ashamed to make their ordeal public.”

Popa’s images reach inside their experience. We do not need to see the bruises and cuts to feel the silent desperation of these places and the loneliness of living with fear that touches everything. The brutality is not banal because we are forced to look at it, imaging it, and try to see where it lies.

“After years of abuse, I have felt women whose selves have disappeared from their souls. They have learned to live with the beating and humiliation. When I say ‘live’, I mean developing the skill to stay alive, not letting themselves be killed by their husbands or be driven to commit suicide.

“This work is not about domestic violence in one place. I have learned that the mechanisms of its happening are the same everywhere. There are cultural differences and different opportunities to escape or rebuild oneself in different countries, but the social stigma is more or less the same,” says Dana Popa.

The beating comes from heaven.

A quarter of homeless women in the world are homeless because of domestic violence.

Dana Popa was a Light Work Artist-in-Residence in September 2011. For more information on Popa and her work, visit her website at www.danapopa.com.

Wendy Watriss is a curator, writer, photographer, author, and co-founder and artistic director of FotoFest International.

Statistics in this essay come from www.stopvaw.org. the website of Stop Violence Against Women and reports to Amnesty International, www.amnesty.org