Mary Mattingly
Navel of the Moon, 2008 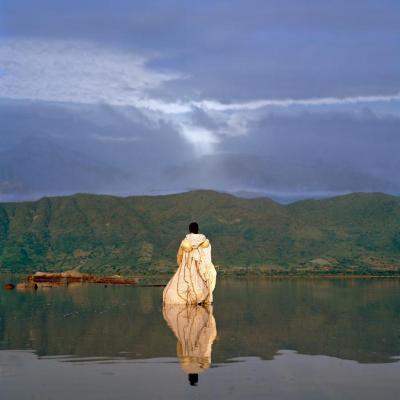 Mary Mattingly is an artist based in New York. Her work has been exhibited at the Brooklyn Museum of Art, The Kitchen, International Center of Photography, the Seoul Art Center, the Bronx Museum of the Arts, the New York Public Library, deCordova Museum and Sclupture Park, and the Palais de Tokyo. She participated in smARTpower: an initiative between the U.S. Department of State and the Bronx Museum of the Arts as artist-ambassador to the Philippines. She has been awarded grants and fellowships from the James L. Knight Foundation, Eyebeam Center for Art and Technology, Yale University School of Art, the Harpo Foundation, NYFA, the Jerome Foundation, and the Art Matters Foundation. Her work has been featured in Aperture Magazine, Art in America, Artforum, Art+Auction, Sculpture Magazine, China Business News, The New York Times, New York Magazine, Financial Times, Le Monde Magazine, Metropolis Magazine, New Yorker, The Wall Street Journal, the Brooklyn Rail, the Village Voice, and on BBC News, MSNBC, Fox News, News 12, NPR, WNBC, New York 1, and on Art21’s New York Close Up series.

The tidal strait between Staten Island and New Jersey has a vestigial name, the Kill Van Kull, and it’s been a crucial trade channel since the era of the Dutch East India Company. Today the roadbed of the Bayonne Bridge, which spans this channel, is being raised so that the world’s biggest cargo ships can pass under it. When this bottleneck is uncorked, goods will flood in and out of the Port of New York and New Jersey unstanched, and that’s why, in part, artist Mary Mattingly lugged a 200-pound bundle of her belongings across the bridge last year. Mattingly, whose work ultimately concerns itself with the fate of Earth and its inhabitants, thought the performance presented a good moment, and location, to take stock of the global impact of mass production and distribution.

This stocktaking was quite literal. Mattingly’s rope-tied bundle sculpture, Fill (Obstruct), 2013  —  boulder-like in its proportion and form  —  was composed of personal items she relinquished, all of which she photographed over several months in an elaborate leave-taking that she considered a form of funeral prayer. This air of mournfulness is not only personal nostalgia. Mattingly wants to mark the fact that each object we purchase has its own story. “From the over-extraction of the earth, to the working conditions of the makers and distributors, to the chemicals that enter the air and water affecting everyone, each object is embedded with trauma,” she says on her website, OWN-IT.Us. With OWN-IT.Us, she traces the international journey of each of her belongings from source material to manufacturer to its travels while in her possession. Visitors to the site can learn about, and even request scans or copies of, her stuff.

Mattingly has produced several of these bundle-sculptures and enacted other performance works with them, including ritualized burials, which commemorate the latent environmental impact of the objects while evoking the landfill. But there is a way in which the performance at the bridge particularly encapsulated all of the elements of Mattingly’s prolific work from the last ten years: a rough-hewn sculptural object of repurposed material; an aspect of physical and intellectual labor; an engagement with public space (often waterways); an embedded commentary on consumption and use of resources  —  and the intervention of the camera to document and interpret it all.

Migration  —  from one state to another, in the case of her Bayonne Bridge performance  —   is also a reoccurring theme in Mattingly’s work. Her Flock House project (2012–13)  — a group of self-sufficient, spherical “mobile living systems” that employed green technologies and were modular and movable  —   was designed to address the increasing needs for populations to relocate for political, economic, and environmental reasons.

Flock House was one of a three-part series of works, the second being Triple Island, an outdoor sculpture and habitat that in the summer and fall of 2013 occupied a waterfront park on the Manhattan side of the East River. Submerged during Hurricane Sandy, the forlorn parcel, wedged between the FDR Drive and the river, became the site for three structures made of recycled and donated material: a living space, a greenhouse /  kitchen, and a community garden. The structures incorporated a rainwater collection system and solar power, and each was set on empty fifty-five-gallon drums so they could theoretically float. With Mattingly and volunteers inhabiting it and providing public demonstrations of its systems, the work was a proposal for living in accelerated climate change.

The third such habitat, Wetland, was launched last summer on the Delaware River as part of the Fringe Arts Festival in Philadelphia. With Wetland, Mattingly and a team of artists and volunteers transformed a 1970s houseboat into a sculpture resembling a submerged house, with a performance space and adjacent floating gardens where the community gathered for events.

With so much to say about the sociopolitical and environmental issues undergirding Mattingly’s conceptual work, we often don’t remark on the aesthetics. Her sculptures and installations have the provisional look of an anarchist squat or a Burning Man camp, which belies the rigorous academic, scientific, and practical research Mattingly invests. Given that she is concerned with ways of inhabiting an imperiled Earth, much of her photographic output could broadly be categorized as landscapes (even photographs of her sculptures employ “horizons”), and one sees in these muted and moody landscapes the influence of maritime and Hudson River School painters. Mattingly also has a tendency to place her subject dead center in the photographic frame, in an evidentiary manner that suggests the urgency of her message.

Photography is sometimes the main event, but just as often the end product of Mattingly’s practice. How to characterize the work of an artist who is creating nothing less than a holistic vision of what our future may require from us as individuals and communities? When asked to describe her work herself, Mattingly says, “I build ecosystems.”

Joanna Lehan is a curator and writer living in New York, NY. She teaches at the School of the International Center of Photography.

Mary Mattingly lives in Brooklyn, NY, and completed her residency at Light Work in November 2014. www.marymattingly.com

Artist Mary Mattingly creates photographs, sculpture, video and large-scale public art projects ostensibly about climate change but revealing deeper focus on survival and endurance in the face of ecological degradation and violence. Describing photography as the universal language of storytelling, Mattingly blurs the line between fact and fiction, present and future. Using her camera both to document and fictionalize over thirteen years of her environmental art and activism, she creates images by digitally collaging together multiple locations. These fictional, non-specific locations often look strangely futuristic and allow a conversation about the earth and our impact on it. For Mattingly the “location” is the world’s eco-system. She looks at the big picture and forces us as viewers to confront our own culpability and the ethics of our choices, a fundamentally important pre-requisite for personal or political change.

For the exhibition Mass and Obstruction, the artist presents images and objects that emerge from an unflinching scrutiny of her own consumption and life style as an artist. In the photograph Pull, Mattingly herself drags a giant boulder of stuff down the street. The artist created this image after she downsized her life, moved into a tiny living space and divested herself of most of her material possessions. She recycled these possessions into several sculptures she calls Boulders, each bound together with a network of twine. The patterns of twine covering the surface of these sculptures is similar to that of her Word Maps, hand-drawn diagrams retracing the movement of mass-produced objects around the world. Mattingly is painfully aware of the complex environmental issues contained in her Boulders and has written, “From the over-extraction of the earth, to the working conditions of the makers and distributors, to the chemicals that enter the air and water affecting everyone, each object is embedded with trauma.”

Mattingly then went on to research the international movement of chemistry, paper, computer equipment, cameras and waste products produced in the photographic process. Photographic Map of the World diagrams the complex network of interconnected systems and interactions in which all photographers participate. She uses the map to expose sociopolitical and environmental injustice. In the series Rare Earth Elements in Photography, she presents eight different rare earth particles used in photographic and computer equipment. Shot in detail, these tiny geological forms have a monumentality and elegance that mutes the danger of mining, refining and recycling them improperly. Reminiscent of Karl Blossfeldt, who revered the aesthetic and architectural structures he found in nature, the black and white images ironically reveal a structure we recognize from footage of the calving of the polar ice cap, a now-iconic image of destruction.

Often her images have a deep sense of compassion and humor for our predicament. Floating a Boulder and The Furies, for example, are photographs that depict our absurd need for excess and our seeming unawareness of the self-inflicted burden of carrying, caring for, storing, moving and disposing of it all.  For a Week Without Speaking quietly reflects on the innate and restorative connection we can have to the natural world.

Mary Mattingly sees herself as a photo-grapher and sculptor, but has also won recognition for her large-scale public projects. These include floating self-sufficient communes (Wetland, 2014, Waterpod, 2009), a series of nomadic portable homes (Flock Houses, 2012), a scalable amphibious ecosystem (Triple Island, 2013), and post-apocalyptic survival suits equipped with solar panels and water purifiers (Wearable Homes, 2002-2009). This abbreviated list is a sampling of the kind of labor intensive, multi-year complex projects she is able to pull off by negotiating with a variety of government bureaucracies, city ordinances, waterways, shipyards, fiscal sponsors and a resourceful community of like-minded artists, designers, builders and thinkers.

With an ever-increasing sense of urgency and horror, we listen to scientists predict the collapse of the world’s ecosystem under the weight of unbridled consumerism, waste and greed. The very products we insist on acquiring for our comfort today we haul to the dumpster tomorrow. Even the most skeptical cannot ignore the daily reports of catastrophic fires, floods, droughts, political instability and the migration of millions fleeing natural disaster and war. Undaunted by the scale and complexity of a global crisis, Mary Mattingly is busy researching, designing, building and suggesting solutions that challenge despair and inertia. This exhibition presents a narrative of places visited and imagined, structures and ecosystems built and discovered, rituals performed for the camera, and the profound spiritual truth of our connection that our decisions about how we live our lives affect our world and everyone it.