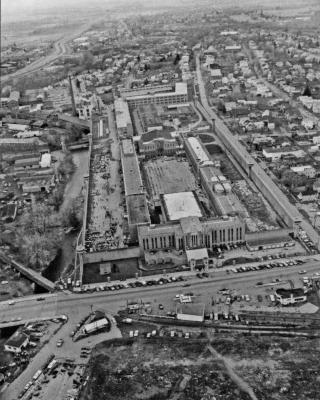 Joe Librandi-Cowan received his BFA in Art Photography from Syracuse University. His current work centers around issues of social justice and mass Incarceration in the United States.

The Light Work Grants in Photography program is part of Light Work’s on-going effort to provide support and encouragement to Central New York artists working in photography. Established in 1975 and one of the longest-running photography fellowship programs in the country, it has supported more than one hundred fifteen artists. Each spring, three recipients receive a $3,000 stipend, a place in Light Work’s opening fall season exhibition, and an essay with images published here in the Annual. This regional grant affords many artists the chance to continue long-term projects, buy equipment, prepare and frame images for exhibition, promote their work, initiate collaborative projects, and realize other artistic goals.

Mary Helena Clark uses film, video, and installation to bring together disparate subjects and styles. Motivated by the transportive qualities of cinema, Clark removes the moorings of linear storylines and interjects fractured sound and image collages. The result are trance-like narratives that employ the same fluidity and physical lawlessness that is at the heart of lyrical poetics. Each frame is an exploration in how rhythms can move a viewer through space while causal relationships splinter.

Joe Librandi-Cowan’s The Auburn System is an on-going photo series that considers the symbiotic relationship of the prison industrial complex with society and its role in his hometown community. He says, “The walls around the perimeter of the prison are a visual and psychological reminder of the two distinctly different worlds inhabiting the same space.” A native of Auburn, New York, Librandi-Cowan works closely with community members and institutions to create and show images that generate constructive dialog around these difficult topics and simultaneously allow these images to ask bigger questions beyond that community about mass incarceration in American society.

Librandi-Cowan is a recent graduate of the College of Visual and Performing Arts at Syracuse University, where he studied fine art photography and received an Imagining America Engagement Fellowship. He has also received a Finger Lakes Community Arts Grant and has had solo shows of The Auburn System at Auburn’s Cayuga Museum of History and Art and The Gallery at Onondaga Community College in Syracuse. Online, Lensculture has featured him and Peter Brook of the Prison Photography Project has interviewed him.

Stephanie Mercedes is a photographic and historical tactician who excises text and images from documents and film to capture the paranoia and forlornness that MCS (military mobile control systems) forces upon victims. An Argentinian-American artist, Mercedes manipulates traditional forms of photography to investigate the role of photographic copyright in history and national memory. Her desire to address a revisionist blight is the catalyst and catharsis in her work. She says, “Even for those who have no connection to Argentina or the history of human rights violations in Latin America, my work is about attempting to restore the missing fragments of historical memory. I believe [this] is a universal human desire.”

Mercedes is an Argentinian-American artist who studied Fine Art and Critical Studies at Smith College and the European Graduate School in Switzerland. In 2014 she received the Norfolk Fellowship from Yale School of Art. She has exhibited her work at Antenna Gallery in New Orleans, Common Ground Gallery in Washington, DC, Flower City Art Center, MORE Gallery in Italy, and Puffin Cultural Foundation. Mercedes won the 5 College Film Festival Award in 2015 and had residencies at Bronx Museum of Art, Flower City Art Center, Kimmel Neilson Art Center, Largo das Artes, LPEP, Lugar a Dudas, and SOMA Summer.

Collectively, these artists reject passivity and challenge conventional methods of engagement and photographic practice. Clark, Cowan, and Mercedes offer their work as a means to cultivate dialogue as well as disrupt and address problematic legacies.