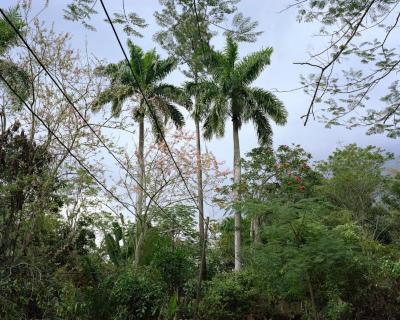 From the Series: From a Small Island

Andrew Jackson’s poignant new body of work encompasses wide-ranging stories and themes, though perhaps the central concerns of this set of photographs relate to the familial effects and consequences of migration. 2018 marked the seventieth anniversary of the docking, in 1948, of the Empire Windrush ship, at Tilbury Docks, Essex. The Windrush carried nearly 500 Caribbean migrants—many of them Jamaican—who wished to pursue opportunities in Britain, the “Mother Country.” A significant published record acknowledges these pioneering migrants and how they heralded a period of a decade and a half of Caribbean migration to Britain. Many people’s familiarity with the Windrush story has occurred through social reportage, whether in books, magazines, or journalistic snippets. Perhaps the most remarkable aspect of Jackson’s From a Small Island is that it allows us to engage an altogether more human and sensitive telling of the story of Caribbean migration. This is not a pat summary of individual human stories, subsumed in a grander dispassionate narrative, but instead a delicate and insightful investigation in which an infinite number of considerations accompany, or are embedded within, each image.

During the many decades since the mid-20th century Caribbean migration to Britain, the terms immigrant and immigration have lost none of their toxicity and venom within the British body politic. Indeed, we might even concede that the term immigrant amounts to an insult and that certain sections of the media still define immigration as a pestilence of near-biblical proportions. Perhaps we can best leave reprising the ungenerous and fearful characteristics of Britain’s anti-immigrant culture for another time. Suffice it to say that casting immigration as adversely affecting the quality of British life has had disastrous effects on immigrants themselves, who are routinely regarded as vexatious problems rather than sensitive human beings. Jackson’s work restores humanity to people from whom this critical characteristic has been routinely withheld or withdrawn. And in restoring humanity, he can and does tell a thousand stories of life.

It’s possible that those of us who are immigrants ourselves, or the children or grandchildren of immigrants, are familiar, to varying degrees, with the stories in Jackson’s photographs. Beyond that, it’s highly likely that Jackson’s photographs will strike emotive, deeply empathetic chords for those of us who are Caribbean migrants, or the children or grandchildren of Caribbean migrants. For whilst these images are deeply personal reflections and compositions, there is much within them that has a profound application to many of us in the Caribbean diaspora. Of course, we understand the Caribbean as a critical component of the African Diaspora, but the term diaspora itself seems in so many ways subject to constant mutation. Within or beyond the African Diaspora, we can comprehend the Caribbean diaspora. Now, the passage of time might oblige or encourage us to think of specific components of the Caribbean diaspora—for example, the Jamaican diaspora. It is this specific manifestation of the Jamaican dimension of the African diaspora that Jackson makes the subject of these photographs.

Many mid 20th century Caribbean migrants imagined their sojourn in Britain would be in the region of five years or so. This, they reasoned, would be long enough to prosper and, having prospered, return home to continue lives of further achievement and good fortune. Ironically, many Jamaican migrants were unable, or not inclined, to return to the country of their birth for many decades, if at all. Thus, home becomes, at best, the place where immigrants laid their hats. Immigrants were not always particularly inclined to see where they lived as home in any emphatic sense. Beyond that, home was most assuredly not the country where they found themselves living. Instead, home became an elusive or illusionary place, not yet inhabited, or a space from which one was temporarily removed.

More than anything else, however, Jackson’s photographs speak of life itself. Failing health, thwarted ambition, familial relationships, heritage, belonging, unbelonging—such are the universal concerns of a remarkable photographer whose work, above all else, speaks to the human condition. These beautiful, affirming, perfectly crafted images speak, in the most profound ways, of humanity and the perseverance of the human spirit. To read the images as relating, primarily, to Jamaica and to the alienation of its migrants would do Jackson’s images a deep disservice. After all, his photographs, notwithstanding the oftentimes sobering nature of their content, resonate with humanity, that most beautiful and precious commodity.

Eddie Chambers is a British-born art historian and a writer of art criticism. He teaches at the University of Texas at Austin.

Andrew Jackson divides his time between Montreal, Canada, and Birmingham, UK. He completed his residency at Light Work in February 2018.