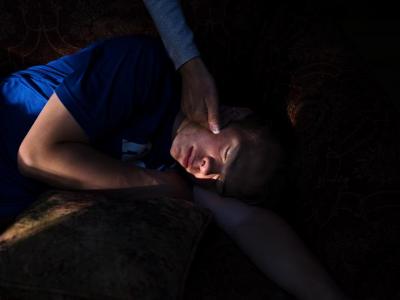 A/P from 11x17 Handling Portfolio. From the series "Remember Me". "Fever check" image was created during a shoot from the residency month.

Preston Gannaway (b. 1977) is a Pulitzer Prize-winning documentary photographer and artist. For nearly 20 years, she has focused on intimate stories about American families and marginalized communities while addressing themes such as gender identity, class and our relationship to the landscape. Born and raised in North Carolina, she now lives in Oakland, California. Gannaway is best known for her long-term projects like Remember Me, which chronicles a family coping with a parent’s terminal illness and was awarded the 2008 Pulitzer Prize for feature photography. Her work has also been honored by Pictures of the Year International, Critical Mass and American Photography. She’s been supported by grants from the Getty Images and Chris Hondros Fund Award, The Documentary Project Fund, National Press Photographers Association and the Economic Hardship Reporting Project. In 2018 she was invited to be a Light Work Artist in Residence.

Her photographs have been shown in solo and group exhibitions in venues around the world including the Griffin Museum of Photography, Ogden Museum of Southern Art, Museum of Contemporary Art Georgia and San Francisco International Airport Museum. Editorial clients include New York Times Magazine, California Sunday Magazine, Mother Jones, ESPN, and WIRED among others. Her first monograph, Between the Devil and the Deep Blue Sea, about the changing character of a seaside neighborhood along the Chesapeake Bay, was released in 2014. Gannaway's photographs are held in both private and public collections, with recent acquisitions including Stanford University, The Do Good Fund and the Chrysler Museum of Art. She is a regular lecturer, often serving as guest faculty in educational workshops. In the Spring of 2019, she will be a visiting professor at the University of Montana.

What began as a project working against time became instead an exploration of time.

Thirteen years ago, Preston Gannaway took a long-form assignment to closely document the final months of a woman’s life. Carolynne St. Pierre was a nurse in her 40s fighting cancer; she and her husband, Rich, believed that opening up their most private moments would preserve something of her life’s truth for their children—Melissa, Brian, and the youngest, Elijah, called EJ, who was only three when Gannaway met him.

Gannaway was then a young staff photographer at the Concord Monitor in New Hampshire collaborating with a writer. She’d recently resolved to push herself beyond observation, toward a deeper connection with the people in her frame. She photographed Carolynne as she recorded videos for the children, as she sat in her pink robe watching EJ play and daydream out the window. Most important were the afternoons when Gannaway put down the camera and they simply hung out. “I became so close to her,” Gannaway says now. She was in the room when Carolynne died, surrounded by family. She recorded that last day in her pictures too, haunting and transcendent in their intimacy, heavy and light at once. Remember Me won a 2008 Pulitzer Prize in feature photography.

After Carolynne’s death, Gannaway kept photographing: the mourners dressed in Carolynne’s favorite color, pink, the children acting out, the trees EJ and Rich planted on Mother’s Day. Melissa and Brian went away to school. Eventually Rich began a relationship with a new girlfriend, Kim, who EJ now calls Mom. Gannaway moved to California, but remains friends with Rich, returning to New Hampshire often to photograph. “Having a project attached to them gives a sense of urgency and structure to my visits,” she says. Remember Me is also a project of endurance: it has all the time in the world.

Gannaway has returned to photograph on Carolynne’s birthday. She was there for EJ’s first school play, The Lion King, when EJ played Simba, the boy lion who loses a parent early. She photographed EJ’s first girlfriend, but missed their breakup. “I would love,” she says, “to show up for everything,” acknowledging that impossibility. Remember Me is a lifelong body of work, as long as Rich and EJ are willing: a project without a known end, comprising significant moments, and significant gaps, a story following an emotional arc rather than a chronological one.

Gannaway had no obvious model to extend her project. Cinema offers the closest analogues. One is Michael Apted’s Up series, the longitudinal documentaries that follow the lives of fourteen British schoolchildren at seven-year intervals, built on the idea that social class determines one’s future. After the first, Seven Up (1964), England becomes less a factor. You watch for the personal, telling moments: for how revelatory it is to simply witness other humans slowly change and grow.

Gannaway’s connection with Rich and EJ also feels similar to director Richard Linklater’s approach to actors in Boyhood (2014), filmed over a dozen years. Like the England of the Up films and the Texas of Boyhood, rural New Hampshire emerges as a pivotal character in Gannaway’s project. EJ becomes a Boy Scout, learns to shoot and drive a car, falls asleep at night facing a wall map of America.

Navigating collaborative relationships is tricky too. “Every time I come to visit we sort of start from scratch,” Gannaway says. “I think there’s a reason we don’t see a ton of work like this. There’s always the push and pull of getting to do what’s best for the story, and to respect what the other person needs.”

You won’t even know I am there, goes the traditional documentary mantra. But the photographer is fully present in these pictures—they are imbued with the consciousness of clear, steady looking. An awareness of Carolynne exists even in the photographs made after: in the startling flashes of light that spill slantwise into the frame, falling over the body of her sleeping son, in the brightness that strikes Rich’s eyes as he drives into a sunset, in the strange radiance of a river in winter. Carolynne is here, too, in the camera’s close, familial gaze, as if Gannaway has absorbed her watchful eye. You can imagine her witnessing the slow transformation of her son’s life, watching a boy grow up, become a man.

Preston Gannaway lives in Oakland, CA, and completed her residency at Light Work in May 2018.