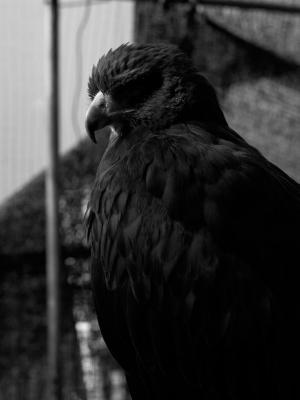 Image From the 'Murder' Series

Guillaume Simoneau (Canada) began his independent studies in photography after completing a diploma in Pure and Applied Science. His first major body of work Love and War was exhibited at the Museum of Contemporary Photography in Chicago and was published by Dewi Lewis (UK). The publication was shortlisted for both the First Book Award and European Publishers Award for Photography. His recent series entitled Experimental Lake is the subject of his second monograph published in 2018 by MACK (UK) and was exhibited at Stephen Bulger Gallery in Canada. Simoneau is a 2018 Light Work Artist-in-Residence and Reminders Photography Stronghold recipient. His series MURDER will premiere at Les Rencontres d’Arles 2019 and will be published by MACK (UK) in the spring of the same year.

Tempestuous and resounding, crack caw crack caw pitches itself over barren grey fields, once restful and contemplative, now distorted, bent in undulating, unrepentant cacophony. The sharp and creeping sonority that perpetuates this maelstrom of barking is barely legible along the horizon—from here, the eye searches vainly for its origin. The ear knows what the eye does not.

On the field’s horizon, the troughs and peaks of late fall dirt form trenches and along them sounds emanate and vibrate, new forms of soil and land—a succession of harvest’s mark upon the land, strafe wounds set to close and heal with spring’s designated re-framing and incubation of sustenance, an incumbent solution to eerie penitence. The listener, as we call her, reacts with curiosity from a distance. Pangs of unease recede from her stomach as recognition takes over. The hammer and anvil of familiarity produce audible myth from behind the rows of soil. In its wake, with a mirthful reminder, several small black movements flicker above the trenches, dipping up and down like popcorn frying on a pan. Their black heads spent in constant movement searching for morsels of grain amongst the upheaval of destitute fields, retreating to and fro, awaiting winter.  In their entourage a number of possibilities, perhaps an unkindness, perhaps a murder—trenches are not the last place to look for bodies.

In their book, In the Company of Crows and Ravens (2005), John M. Marzluff and Tony Angell discuss the socialization of humans and corvids and the exchange that occurs when species inhabit shared environments, from rural to urban. Corvids include ravens, crows, rooks, and jackdaws. Each has a set of ascribed characteristics, from the linguistic fodder of their namesake to the dietary predilections that govern their classification.  For example, ravens are among the few corvids that consume meat as predators, and they limit their association with others of their class due to dietary concern.

Humankind scripts animal mythology. A species with another voice authors their existence as it relates to myth and describes their intent from without.  In his masterpiece of suspense, “The Raven,” Edgar Allen Poe employed the animal’s infernal side, in which we hear but can never decipher its voice—a literary device that negates and co-opts its plight to engage instead with human despair and trepidation. Historically, the raven and the crow have traversed various cultures that use their image and iconography to privilege a personal narrative over a national one. But in 1982 the Japanese photographer Mikahase Fukase published a landmark subjective and historical photo-essay, which oscillated between the myth of a post-atomic bomb Japan and the author’s own depression and despair. Filled with anxiety, dread, and dark premonitions of time and mortality, the book reflected Fukase’s fascination with both the raven and its cyclical position as prophet of self-doom.

The same year that Fukase published Ravens, a Canadian family began their own discourse with the crow—the raven’s near cousin on the evolutionary tree. Guillaume Simoneau’s father, an industrious man at the edge of the great Canadian wilderness, accidently felled a tree in which nested a “murder” (or flock) of baby crows. An adoption of sorts ensued on both sides. As Guillaume grew from toddler to child, caring for this murder stretched into a special relationship. Both human and aviary families bonded in play and in the solitude of the quiet trees surrounding them. Simoneau’s mother, herself an avid amateur photographer, became the crows’ principal documentarian. Her Japanese Yashica camera enabled a corollary and circular possibility among Simoneau, the mythology of corvids, and many miles away, Fukase. What has resulted since is a body of work about the myth of a murder and the possibility for its redemption—the possibility of escape—which suggests some sense of “full circle.”

With his passionate homage to his family—his mother in particular— and to Fukase, Guillaume has crafted a deeply poetic and personal mythology of reflection and cultural correlation. Like the field of vision described above and the crows within it, the work raises and lowers, dips and upheaves its narrative through the peaks and troughs of life. The result celebrates the freedom of flight, the narrow escapes of death, and disaster—all the while foraging for those ancestral binds that knot together cultures, families, and all fleeting creatures of earth, nestled amongst the pine’s sagging branches.

Guillaume Simoneau lives in Montreal, Canada, and completed his residency at Light Work in February 2018.