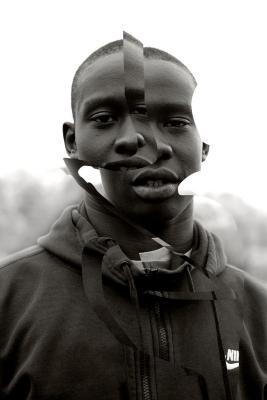 For a more recent CV or bio please visit the artist's website, http://www.atongatem.com/

Atong Atem is a South Sudanese artist and writer from Bor, living in Naarm, Melbourne.

Rays of sunlight reach us on the balcony of Atong Atem’s apartment block, overlooking the Fitzroy and Carlton neighborhoods of inner Melbourne—from gentrifying Bikram studios, bars, and deluxe apartments to the vibrant but tired public housing towers, nearby bike shops, and Latin American grocers. We exchange news of our recent travels, academic achievements and woes, mental and spiritual health. We move onwards to a new rooftop bar above a trusty café where we continue for hours in the sunlight. A dear friend recently said that our bodies are not sunburnt in the Australian ozone-depleted context but rather sunbeautiful because of the added golden shine of sunkissed days, we who live on these unceded Kulin Nation territories.

What is life’s essence? What is the reason we make and imagine? Is destiny meeting your relations on the shores of Lake Onoñda’gega’? Atem tells me how she met South Sudanese relations at Destiny Mall during her residency at Light Work. We quickly learn that Onoñda’gega’ translates as “people of the hills.” As peoples of the water, Atong and I emphasize food, intimacy, representation, and kinship. Back at the mall, after mutual nods and beginning conversation, Bang and his family invited Atem over for lunch. As they got to know each other, a locally-based series of her portraits, both studio and outdoor, resulted.

She and I often speak about futures, imagining time and space beyond empires, emotions, living without exhaustion, and the various negative impacts that our bodies continue to hold. We met in fellow diaspora and displacement, relatively empowered to think, breathe, feel, sense, speak, and create for the positions of our respective Indigenous peoples. Black, Brown, African, Oceanian, North American, European. We can only hold the memory and warmth of what we remember and know. Atem’s still and moving image practice is a form of seeking out home/heat/hearths in places near and far, intuitively engaging folks she knows in the studio traditions that leading African photographers established throughout the 20th century.

The portraits with wavy edited spaces that Atem captured in Syracuse are part of her ongoing South Sudanese archival work. Not content with limiting her view and subjects to where we have landed and where our genealogies have birthed us, she documents and cares for community life from within. We are called to find our chosen and blood relations, constantly seeking out all around us, through the airs, waters, fires, energies, imposed borders, and traumas of this life. This way of relating to folks and to herself as part of the making process is salvatory, enabling Atem to channel her life and work into still and moving image, in stark opposition to the representational burden of anthropological and ethnographic photography and speaking back to a perceived center. Preferring African and global Indigenous art histories is not just a challenge to Euro-American art historical references. Atem is dealing with real-life pressures—community responsibilities, mental health states, personal finances, and familial/personal development, behind the lens.

Despite the violence of wars, extractions of resources, militarized settler colonies, and genocidal regimes across continents, we can imagine the ploy of greed and coveting ceasing, we can imagine the scrambles for empire-building and existence-destroying ending. We are the ones to hold tight to histories of all kinds, from connective encounters in the mall that collapse generational and geographical distance, to sunbeautiful exchanges reflecting on challenges and gains for queer and global Indigenous and non-European makers and viewers in this corner of the world we inhabit. We can think together in the dream space, the liminal space, far from and coursing through this one, that one, yours, mine. We can think beyond ongoing colonialisms, patriarchies, traditions, realities, grounded as they are at once in multiverses. We can see our homes in the voyage, our invitations to multiple, mutable, shifting homes and protections. Resistances to extractive Western gazes, plantations, malls, apartment blocks, wars, economies, Western Union.

The cycle of exchange and custom comes back around, full rotation. To survive wars waged over cultures, languages, lands, waters, oils, and more, defies empire. Remaining vulnerable, honest to the transformative experiences of travel, art world fakery, and time out are one step more. To voyage is an Indigenous experience, especially with all our relations everywhere everywhen everythen everynow. There are things best said, best expressed by sensual languages beyond the purview of European languages, so disconnected from their own Indigeneities in

their own mountains, valleys, river deltas, and fields. Long live the first meetings with family chosen and blood that bring that nod or smile of warm knowing.

Atong Atem is a South Sudanese artist and writer who lives in Melbourne, Australia. She completed her residency at Light Work in June 2018.