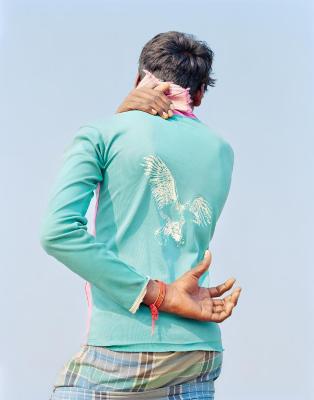 For a more recent CV or bio please visit the artist's website, www.a-myth-of-two-souls.com

Born in 1985, Vasantha Yogananthan lives and works in Paris. His photographic practice addresses the space between documentary and fiction.

His projects are developed over long periods of time and he only works analog – with both large-format 4x5 and medium-format 6x7 cameras. Besides the aesthetic, he is deeply attached to film photography for its slow – almost philosophical – process.

Over the years, Vasantha Yogananthan has developed a distinctive colour palette solely based on natural light. His interest in painting has led him to work around the genres of portrait, landscape and still life. In his project A Myth of Two Souls (2013-2019), he has been working with a local Indian artist to revive the tradition of hand-painting. The more his practice grows, the more he perceives photography as a malleable material open to interpretations.

The book form has been central to his work since the beginning. In 2014, he co-founded the publishing house Chose Commune and published his first book, Piémanson. In his books, he interweaves staged photography with scenes from the everyday life, thus exploring different forms of photographic storytelling. His project A Myth of Two Souls will be published into 7 books (2016-2020) by Chose Commune. The first four chapters, Early Times, The Promise, Exile and Dandaka have already been published.

Vasantha Yogananthan has received several awards, among which the IdeasTap Magnum Photos Award (2015), The Prix Levallois (2016) and an ICP Infinity Award as Emerging Photographer of the Year (2017). That same year he was also selected among the 20 FOAM Talents.

A Myth of Two Souls is a long-term photographic project by Vasantha Yogananthan. Projected to fill seven volumes, this work-in-progress, part documentary and part fiction, will span the main parts of India’s epic mythological poem, the Ramayana. This popular classic hugely pervades South Asian culture and influences the everyday through traditions, religion, morality, and ideology. The story’s central character, Rama, rescues his wife, Sita, from the clutches of the evil Ravana, who abducts her. In the story, this long and complex tale examines social and familial relationships, what comes of one’s words and deeds, love and loss, promise and honor, life, struggle, and death. Yogananthan uses this epic to reflect upon contemporary India and its relationship with the West through his subjective lens.

As a boy, Yogananthan read his father’s comic book version of the story and the pictures especially fascinated him. In 2013, he visited India and this memory compelled him to read the epic itself while he was there. During this trip, he realized how visible some aspects of the epic’s story were throughout Indian society. He saw evidence of the Ramayana manifested in daily life, popular culture, and in visual motifs everywhere. Yogananthan began to re-imagine and reconstruct the story as the basis for a new project in his photographic practice.

The seven-book series comprising A Myth of Two Souls loosely represent the epic’s seven chapters. However, retelling any classical story carries difficulty and comes with heavy responsibility. Because the Ramayana is so well known, the challenge of adaptation includes both faithfulness to the original as well as Yogananthan’s ever-present need to honor his own artistic interpretation. He approaches this project as neither tourist nor strictly as an outsider. Born and brought up in France to a Sri Lankan father and a French mother, his mixed cultural heritage must have sometimes included difficulties in establishing an identity—one torn between his French national identity and one related to his father’s homeland. Such a predicament comes with the displacing effects of generational diaspora: detachment, a feeling of alienation, and a strange sense of ancestral belonging. It is between these poles that Yogananthan finds himself as he travels across the Indian subcontinent.

There is another predicament. Some Indians feel that Yogananthan’s poetic aesthetics overlook some of the societal norms that the Ramayana imposes, especially in relationship to current controversies about gendered roles and expectations. In a society largely governed by Hindutva ideology, many interpretations of the Ramayana can be quite conservative and some would argue they promote a certain rigidity in thinking, especially where progressive contemporary thought is challenging older ideas. Yogananthan sidesteps this difficulty by creating a space in which his audiences can discuss social and political flux as opposed to those spaces in which authorities dictate norms. As Angela Davis remarked at Berlin’s Akademie der Künste last June, “The aesthetic domain means we can happily set aside some of the conventions about the production of knowledge.”

Furthermore, Yogananthan’s interpretation of the text is not one dimensional but comes with collaborative layers. He addresses the shortcomings of photography’s ability to manage what John Tagg called the “burden of representation” in Tagg’s 1993 book of the same title. Yogananthan uses contributions from Indian painters, illustrators, and writers to enrich and expand his own photographic sensibility. These artists bring their own subjectivity and indigenous perspectives so that an intercultural dialogue occurs within the work. In addition, the artist casts local people he meets across India to act as willing models for his tableaux, instilling a degree of street theatre and performance in the images.

Working from the Ramayana, Yogananthan creates in A Myth of Two Souls a series of sites where, much like the comic books of his childhood, one can, if one desires, encounter the story entirely visually. This beautifully and poetically retells parts of this much-loved tale and further, in my opinion, provides a space where we might consider the serious issues the Indian subcontinent faces today. Besides evoking the magic of this ancient epic anew, perhaps such an artistic encounter also offers a metaphorical and visual backdrop for the hard-fought activism that is the actual battleground for this society’s ills.

Sunil Shah is an artist and writer based in Oxford, UK.

Vasantha Yogananthan lives in Paris, France, and completed his residency at Light Work in November 2018. www.vasantha.fr