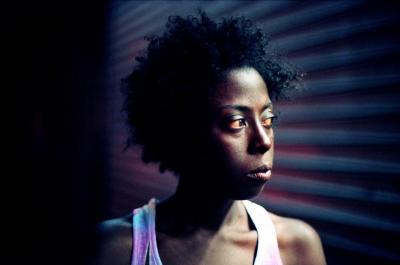 For a more recent CV or bio please visit the artist's website, http://www.khalikallah.com/

Khalik Allah is a New York based photographer and filmmaker who describes his work as "Camera Ministry." Since FIELD NIGGAS, 2015, Allah has been working on his magnum opus, BLACK MOTHER, 2018, which had it’s New York premiere at MoMA and Lincoln Center. His first photo-book, Souls Against the Concrete, was published by University of Texas Press, 2017.

We are truly living in amazing times when you can discover one of America’s most exciting and dynamic photographer/filmmakers on YouTube, email him, and become good friends, fast, just like that. Bam!

I stumbled across Khalik Allah’s Field Niggas (2014) on a fall evening in 2014. Immediately, his film pulled me into a world I knew but hadn’t seen in a long time. I was up close and personal in the street-beaten faces of folks surviving, barely living on East 125th Street in my neighborhood, Harlem, New York City.

I emailed Khalik Allah to praise his work. I had a keen sense of his knowledge of urban street culture from hearing the slang he used and I even suspected some connection to the legendary Hip Hop group, Wu-Tang Clan—some of his terms and phrasing were from their lexicon. He emailed back immediately with ecstatic appreciation and yes, Pappa Wu from the Wu-Tang Clan was one of his mentors. Subsequent phone calls spanned the creative spectrum as I learned he knew my own work too. He’d read my forward to the re-issue of Magnum photographer Bruce Davidson’s 1980s book, Subway (2011), and another I’d written for street photographer Jamel Shabazz’s Back in The Days (2001). Khalik Allah and I became friends. As others became aware of his stand-out work, calls and offers rolled in. He sometimes asked advice in navigating what can be a poisonous snake pit in the greedy commercial world. But when Beyonce’s creative team invited him to New Orleans to shoot footage for her ground-breaking short, Lemonade, I advised him to take the gig, and he did.

I grew up in Brooklyn’s Bed-Stuy section. I remember the 1970s vividly, when drug addicts filled pockets in my hood and around the city. Heroin users, cocaine fiends, and pill freaks gravitated to areas where they could buy drugs and were often on public display, nodding in and out of drug-induced states. In the 1980s, Ronald Reagan was elected president and launched his “War on Drugs,” including his wife Nancy’s “Just say No” campaign. This really was an attack on black and brown people who were often trapped in inner-city neighborhoods that were dumping grounds for drugs. This time around, since addiction overdoses and deaths have moved into the white community, many politicians more sympathetically call it a “health crisis—ironically brought to us by legal drug dealers, doctors, and the trillion-dollar pharmaceutical industry. In the 1970s and 80s, black & brown people caught in the grip of addiction were imprisoned at unprecedented rates. This decimated the lives of at least two generations.

Khalik Allah’s Field Niggas takes its title from a speech by Malcolm X that described the difference between slaves on a typical Southern plantation. Malcolm X explained that “house niggas” were often the off-spring of white slave masters and loved the master. The others were “field niggas,” the hardest working and most brutalized of the slaves. Modern-day urban “field niggas” were the subjects that elevated Khalik Allah to prominence as an image maker who commands our attention.

Khalik Allah is a New York street person with a fearless, razor-sharp eye. His image-making skills immediately struck me—he has been on the hunt, stalking the New York streets for his subjects, often those hiding in plain sight. Few rushing past want to see them. The photos in this book detail the process that lead him to make his film, Field Niggas. While pursuing his photographic obsession in making these beautiful yet arresting still images, Allah refined his technique too. Because the digital 35mm SLR camera can also shoot high definition video of excellent quality, he started to combine still and moving images in ways that culminated in his now-celebrated film.

Besides his creative and technical decisions, Khalik Allah develops relationships with his subjects. He builds a bond. Like new friends who really need help, those you see in these pictures get love, respect, and encouragement from him. His subjects often respond in kind, letting their guard down, pausing and posing for him, allowing Khalik Allah inside and, thankfully, bringing us along with him.

The artist’s main job is to take us where we haven't been, show us what we haven't seen, and hopefully teach us some things we need to know. Khalik Allah delivers on all these levels in each of these powerful, unforgettable, and often haunting images.

Khalik Allah lives in East Patchogue, NY, and completed his residency at Light Work in August 2018.