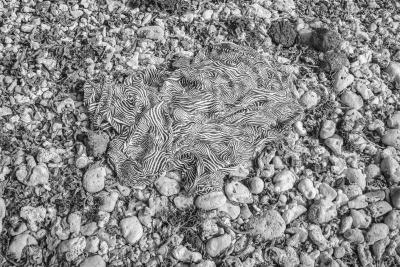 Keisha Scarville was born in Brooklyn, NY and earned her B.S. from the Rochester Institute of Technology (RIT) in 1998. She has shown her work at the BRIC Arts Media House, Brooklyn, NY; Kenkeleba Gallery, New York; Studio Museum of Harlem, New York; Rush Arts Gallery, New York; the A.I.R. Gallery, Brooklyn, NY; the Brooklyn Museum of Art in Brooklyn, NY; the African American Museum in Long Island, NY; and Soho Photo Gallery, New York. She has presented lectures at the International Center of Photography (ICP) and at New York University in New York. Reviews of her work have appeared in the New York Times, Nueva Luz, and CameraArts. Her work is in the collection of the Smithsonian Institute in Washington, DC. Currently, Keisha is a faculty member at the ICP in New York. She balances her time between working for various youth arts organizations and her own art-related projects.

A chair is still a chair

Even when there’s no one sittin’ there

But a chair is not a house

And a house is not a home

When there’s no one there to hold you tight

I open with a quote from the late singer Luther Vandross’s 1989 hit “A House Is Not a Home” because recently I have been thinking about the differences between house-lessness and homelessness, posthumanism,and the increasing struggle of certain bodies (of color, immigrant, queer, female) to find safe places to dwell. If, as Vandross croons, “a house is not a home,” then what is a home? I believe it is not a matter ofoccupancy or location, but rather a matter of belonging. It is about having an intimate connection to the territory in which one dwells, and such an intimate connection is not easily forged when social forces makeit essentially impossible for certain groups to cultivate a culture of belonging. Some of us have a more difficult time than others. As a diasporic subject with Afro-Caribbean and indigenous roots, I am multiply displaced. In my dislocation, I have become nomad, yet the freedom Gilles Deleuze and Felix Guattari associated with becoming nomad (in their 1987 book, A Thousand Plateaus) eludes me and others like me. We are not free to follow “lines of flight” out from underneath the dominant culture that denies our claims to belonging, to being fully human for, beyond biology, a fundamental aspect of being human is having a place where we belong: a home. The diasporic subject’s complex relationship to their home is central to her daily human experience in the place that is “not her home.” When forced from one’s home, one can lose ground, a sense of self, and a sense of belonging. To wend our way back home, diasporic subjects must create alternatives to the conventional understandings of home, space, and place.

In Keisha Scarville’s own words, “rituals and the body [are] the primary site[s] of belonging.” With a decisive eye and deft hand, Scarville constructs new origin myths for the diasporic subject I have just defined. Because of the nomadism thrust upon many communities, home is not available in the outside lands through which we travel; it is found within ourselves, the bodies in which we move and the rituals  —  old and invented  —  we practice to nurture our desire and need for belonging.

In her ongoing series i am here, she uses her personal story as a Guyanese diasporan to explore conceptions of home. As is common for disaporans, memories and imagination work together to create the homes
they miss but, depending on their spatial and temporal distance from their homelands, may not be able to completely remember or accurately recreate. Scarville makes these imaginings / memories manifest with large-scale black-and-white portraits and still lifes of objects she and her family have invested with Guyanese totemic lore. In earlier photographs, such as Untitled (i am here 5) (2012), an image of a row of pebbles placed on the floor between the artist’s feet, and Untitled (i am here 3) (2012), an image of the artist sitting on a wooden floor and drawing circles in a pile of salt, Scarville is the primary subject. In these images, she reveals only sections of her body as well as the marks her body has left on her actual house through deeply personal rituals. The obscured views of her body and domestic space suggest that one cannot exist without the other: a home or a place of belonging requires the body, and through claiming a place to belong, an individual grounds herself in the world.

In the images produced during her residency, Scarville focuses on her parents who emigrated from Guyana. Included are portraits of her parents standing, sitting, or lying in an unnamed landscape reminiscent of their homeland. Similar to her earlier self-portraits, she obscures her parents’ faces by posing them with their backs toward the camera. This strategy forces us to follow the figures’ sightlines into the distant landscape, where they may be sighting  —  and where the artist cites  —  their homeland. We are compelled to consider the ways that diasporic experiences leave traces in seemingly unrelated spaces. She has also taken ethereal still lifes of such objects as her mother’s Bible; the pages are captured in mid-turn, though we do not see the hand that turns them. The ghostly quality of these still lifes emphasizes that the diasporic experience is haunted by, among other things, migration’s often-unmet promises. They also emphasize, as the artist notes, that home and belonging are as tangible as they are obscure.

crystal am nelson is a scholar, artist, curator, and writer based in California. She earned an MFA in photography from San Francisco Art Institute and is working toward her PhD in art history and visual culture atthe University of California Santa Cruz.

After the death of her mother in 2015, artist Keisha Scarville deepened her use of photography as a way to explore how the loss of such an anchor point can affect one’s identity and sense of both absence and self in the world.  Scarville’s new exhibition, titled Alma, presents a selection of photographs whose larger subject is transformation born of loss.

She has worked on this project for more than three years and has approached it in several different ways that she describes as “chapters.” Initially the work was about body as medium and then, place-as-container, particularly Guyana, South America, Alma’s birthplace, and Crown Heights, Brooklyn, an enclave of Caribbean immigrants where Scarville grew up, which she continues to call home.

In 2016 the artist packed up a suitcase of Alma’s richly patterned and colorful clothing and returned to Guyana. Again in her mother’s homeland, wrapped in her clothing, the artist traversed a landscape embedded with deeply personal family history. The culture and history of Guyana is a unique and complex mix of African, European, Indian, Chinese, and indigenous people. Located on the northeast coast of South America, it shares the Caribbean’s larger history of colonialism.

Scarville says she was investigating the ways in which the landscape holds narratives. Certainly, as we see her standing on the windswept seawall in Guyana, her ritual seems to honor the memories of her ancestors and acknowledge the fact of diaspora. Some might read this as longing and view Scarville, a first generation Guyanese-American, as simply intimate with displacement and alienation.  Instead, she vigorously sets forth, a voyager whose own body serves as her vessel, to re-claim that space.

Over time the artist became interested in allowing for more abstraction and so shifted to creating black and white images of figures in dense foliage.  This landscape embraces the shrouded figure who simultaneously emerges and recedes, evoking the temporary nature of the body and life itself. Scarville says that she was looking for ways to visually conjure her mother’s presence by using her own body as a medium. With the death of a parent comes a new awareness of our own mortality. Importantly for Scarville’s narrative, these photographs also reveal her own spirit.

The collapsed space in these images reappears in the artist’s studio work. Part of the exhibition includes a series of still life set-ups comprising Alma’s clothing and some of her possessions. These include a tattered, well-worn compact, along with some essential ingredients for her recipes, like pig tails and plantains. For some of the studio shots, Scarville piles up layer upon layer of Alma’s clothing to create a kind of abstract, organic landscape that acts to reconstitute the body.  A close-up of a sequined garment resembles the shimmering surface of water, a spiritual metaphor in many cultures and religions that often represents life and rebirth.

The exhibition also includes a sculptural piece entitled Mama’s Bones. Scarville remembers her mother saving the bones she used in cooking and then decorating them with her daughter. In this piece the artist has taken several bleached beef bones and covered them with black and white dot patterns reminiscent of the solar system, both talisman and lesson from Alma on how to create beauty from refuse.

An interest in 19th century spiritualist photography also suffuses Scarville’s work and she is clearly familiar with texts on photography’s relationship to death by such writers as Roland Barthes, Susan Sontag, and John Berger. Scarville says she especially values Berger’s work regarding “the ambiguity of the visible and the visual experience of absence.”  She also references the Egungun, an African religious practice in which costumed figures perform a dance of ancestor worship.

On the catalogue’s final page is a portrait of Alma that Scarville made during her residency at Light Work in 2014. This image marks the beginning of Alma’s year-long battle with cancer, which took her life in August of the next year. Scarville chose to photograph her mother from behind as she reclines in a city park a few blocks from Light Work, resting for a moment in the process of leaving just as Scarville is in the process of following. As viewers, we look over Alma’s shoulder to follow her gaze, a stunning image that embodies how the artist’s narrative has followed Alma’s life and, indeed, just as each of our lives follows those who have gone before us. Alma showed her daughter how to build a home, make soup, decorate the bones, each act suggesting further reaching, reconstitution and reclamation. And through her photographs, Scarville shares this survival and triumph with us.