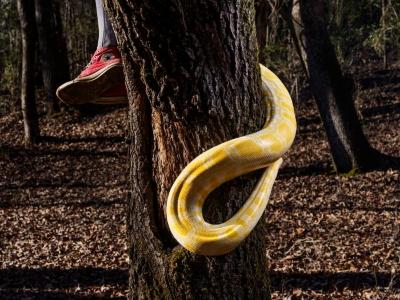 From Oxford, Mississippi, the town of Water Valley lies eighteen miles southwest. It didn’t make it onto William Faulkner’s imaginary map. It didn’t appear on the route in As I Lay Dying, in which her grief-stricken family carries the body of Addie Bundren for miles in a wagon. It’s not the spot where Addie’s daughter, Dewey Dell, pregnant and alone, hears the “sad steady sound” that “blows cool out of the pines,” but, geographically, it’s close.

Carolyn: I came to Water Valley because the house I wanted to rent in Memphis had fallen through and another place appeared. The next time I came was to work with Coulter. All day long I sat sewing with other women, needles pricking our fingers through the rugs, listening to a true-crime podcast. One night I rode around the county with the police deputy. All of a sudden we were chasing someone who was fleeing Memphis and the nose of the car went sideways into the highway to stop him. In the morning they brought us to the station to sign a paper saying that what we had witnessed was not what had happened. I decided I had seen enough of the men in this town for a while.

Katherine: People go to school or work in Oxford, but they come to Water Valley because of the houses. There’s these amazing turn-of-the-century Gothic Revival Victorians and you can fix them up cheap. I was waiting for the right guy to do it with, and then I got pregnant and I just decided to do it on my own.

Claire: I came to Mississippi because of Faulkner. It was As I Lay Dying that did it. It was Addie Bundren that did it. I think her chapter is the best eight pages in modern American literature. A lot of critics say Faulkner hated women. I think that’s maybe too easy to say, though I have less forgiveness for him now than I did a few years ago. I think women were mysteries to him and that’s why he wrote about them—to try to figure them out. But he didn’t actually ever do it. He didn’t figure them out. I came here to write about Faulkner’s women, and I stayed.

Adrienne: I’ve never read him. Never had the inclination.

Natalie: My ex attributes our divorce to moving to Water Valley, and he’s absolutely right. I started coming to knit club and I found my voice again. I would see the reflection of what that sounded like in someone else’s face.

Katherine: Knit club started because Coulter put it in her newspaper column: “Come to my studio and I’ll teach you how to knit.” But then we just started hanging out on my porch every Tuesday, and it’s been that way for years.

Coulter: The first thing to know about it is that nobody knits. I mean, pretty much everyone knows how to knit, but if anyone is knitting, that person is probably pregnant and needs something to do with her hands ‘cause she can’t drink.

Katherine: A couple of my friends’ ex-husbands, they just hate it. They’re like, these chicks are up to no good. Maybe they’re right.

Natalie: In the winter, some of us will go to my attic and huddle up there and smoke out the window. It’s awful, but we do. I need just that one night a week, to sit and listen to someone else talk.

Coulter: Everyone’s got some drama on the outside. But some of us are single mothers and a week could go by and no one asks you how your day was.

Adrienne: Before I came here, I painted and lived in a one-room apartment on the side of a mountain in the Caribbean. I liked kids, but I never once thought about mothering anyone myself until the plus sign appeared on the pregnancy test.

Claire: They said, you’ll be around women, you’ll feel better. And he’s not worried that we’re sharing our deepest, darkest secrets ‘cause he knows we do.

Natalie: Sometimes you don’t have to say a word because they already know. And sometimes they see it before you do.

Coulter: I saw my mother quilt and I thought, there’s no way I’ll ever be able to do the classic work she does. But not being able to match corners has led me in other directions. All these pieces I’ve been gathering my whole life were unconsciously leading me here.

Claire: To me his women have more agency than they appear to. It’s basically everything Addie Bundren says in her chapter but especially, This may look like what happened to me but I was aware of what was happening. Not all of Faulkner’s women were like that, but Addie was like, Oh, I knew what was going on. This is how I survived in a man’s world.

Carolyn Drake lives in Vallejo, CA, and completed her residency at Light Work in March 2019.

Rebecca Bengal is a writer living in Brooklyn, NY. www.rebeccabengal.net