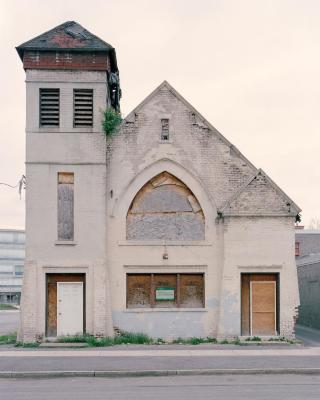 Cian Oba-Smith is an Irish Nigerian photographer who was born and raised in London. His work focuses on communities and subcultures around the world with a particular interest in approaching subjects that are often misrepresented and presenting them in a different light. The relationship between human experience and environment is at the core of his projects.

In his 1951 poem, “Harlem,” writer Langston Hughes asks one of the most poignant and essential questions American poetry has ever posed: What happens to a dream deferred? More than social critique, Hughes’ poem ponders the powerful intertwining of dreaming and deferral that define the oppressive conditions marginalized communities faced in cities like Black Harlem across pre-Civil Rights America.

Photographer Cian Oba-Smith’s revealing portraits and urban landscapes document another New York city with an historically Black community and provide a visual range of answers to Hughes’ ever-present question. Oba-Smith’s contemporary images portray the precarious lives of Black Americans in Syracuse and the once-legal practice of redlining that shut them out of the “American dream.” Something has happened here and yet nothing has happened here.

To understand the underlying violence in Oba-Smith’s documentary images requires knowing Syracuse’s history of redlining. In the center of New York State, Syracuse ranked first in the nation in 2018 for concentrated poverty among Blacks and Latinos. The same year, surrounding Onondaga County was the ninth most segregated county in the U.S. This segregation began in the 1930s amid concentrated efforts to increase home ownership in response to the Great Depression’s social and economic damage.

Federally backed mortgage loans increased home ownership by selecting buyers most likely to maintain their payments. Neighborhood racial make-up was one criterion for these mortgages—one that discriminated against Black and also Jewish and non-native born people. To determine who got funding and how much, the federal government created maps that outlined geographic areas in green (100%), blue (85%), yellow (15%), and red (0%)—hence the term “redlining.” In the 1950s, the strategic construction of national highways (such as Interstate 81, which ran through Syracuse’s core) further divided American cities and institutionalized discrimination.

London-born Oba-Smith follows the practice of large-format photographers like Deana Lawson who use an early photographic device to capture Black Americans in a contemporary light. Fascinated with the United States’ place in popular culture, he seeks to “explore that line between fact and fiction and where the two meet particularly when it comes to the myths around the ideologies at the core of the U.S. and the ‘American Dream’.”

Perhaps not coincidentally, also since the 1930s, the term “American Dream” has functioned as a national ethos touting a set of democratic ideals that promise freedom, economic success, and upward social mobility for one’s family and children—all within reach through hard work. Although heavily marketed, this dream has eluded many. Instead, persistently oppressive practices like redlining (and its legacy of gentrification) prove that hard work guarantees neither equality nor fairness.

In Hughes’ poem, this dream dries up, festers, and stinks. Many of Oba-Smith’s images evoke a similar, sinister fate for this neglected dream. We see a dilapidated church isolated amidst a cotton candy pink sunset haze while children play baseball knee-deep in a field overgrown with weeds. In another image, hair extensions lay splattered across a concrete sidewalk, perhaps the remains of a recent street fight.

There is no optimism here. Though rose-tinted (perhaps an effect of the color film he uses), Oba-Smith’s images don’t sugarcoat. Setting up his camera and tripod in the streets, the photographer encountered and then positioned his subjects against a dusty brick wall that starkly suggests some sort of dead end. He composes others from the bust up with a selective focus on the subjects’ faces as they stare into the void. One girl confronts the camera with a black eye—a blunt force trauma symbolic of years-long discrimination. One portrait of a mother and child seems to be the single image of hope, though this too may be a photographic trope.
Albeit an outsider/foreigner, Oba-Smith’s position is as a witness who uses his camera to capture the economic and political forces in this specific moment in contemporary history. His images document the contradicting cycles of exploitation and liberation that still define how the U.S. operates. In Syracuse, Oba-Smith witnesses his subjects’ resilience throughout redlining’s long aftermath and their capacity both to resist the most adverse conditions and to continue to exist with 0% chance of support. If this resilience marks agency, then Oba-Smith’s urgent work makes clear that the agency of Syracuse’s Black and Brown residents remains under attack.

According to Onondaga County Real Property Services records, there were one hundred fifteen homes for sale in the county in 2019. The most expensive residence was a five-bedroom house with four and a half baths that sold for $714,000. Such real estate statistics make Syracuse seem like a prosperous, upper-middle class town—certainly not one that reflects the lesser opportunities handed down to its darker-skinned populations. So, what happens to a dream continually deferred? For many it becomes a living nightmare. Oba-Smith’s photographs nudge us to wake up.

Cian Oba-Smith lives in London, UK, and completed his residency at Light Work in May 2019. www.cianobasmith.co.uk