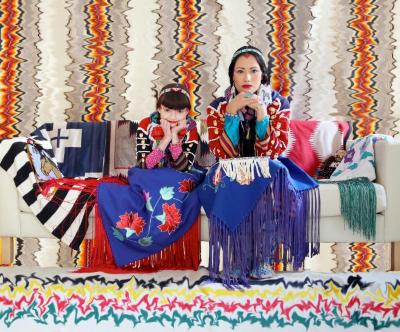 Exhibition Print from: Baaeétitchish (One Who Is Talented)

For a more recent CV or bio please visit the artist's website, www.wendyredstar.com

Artist Wendy Red Star works across disciplines to explore the intersections of Native American ideologies and colonialist structures, both historically and in contemporary society. Raised on the Apsáalooke (Crow) reservation in Montana, Red Star’s work is informed both by her cultural heritage and her engagement with many forms of creative expression, including photography, sculpture, video, fiber arts, and performance. An avid researcher of archives and historical narratives, Red Star seeks to incorporate and recast her research, offering new and unexpected perspectives in work that is at once inquisitive, witty and unsettling. Intergenerational collaborative work is integral to her practice, along with creating a forum for the expression of Native women’s voices in contemporary art.

Wendy Red Star makes art that arises from her Native American cultural heritage and family history, as well as her expansive interest in photography, video, sound, sculpture, fiber arts, and performance. Red Star’s artistic practice involves ongoing research into historical archives and narratives, which she thoughtfully deconstructs to explore the intersections of Native American ideologies and colonialism’s unsettling effects on past and present.

Red Star grew up on the Apsáalooke (Crow) reservation in Montana. Her exhibition title, Baaeétitchish (One Who Is Talented), references the Crow name she received while visiting home this past summer. It was the original name of her grand-uncle, Clive Francis Dust, Sr., known in the family for his creativity as a cultural keeper. Clearly, Red Star carries that same spirit as an artist. “By carving out space in the contemporary art world,” says Red Star, “I hope it will make it easier for the next generation of Native women artists to gain access to institutions and opportunities.” Red Star’s powerful exhibition at Light Work brings together four photography-based projects produced between 2006 and 2016.

Four Seasons (2006), the earliest set of images in the show, poses Red Star in traditional clothing within constructed dioramas of Fall, Winter, Spring, and Summer. She began this work in response to problematic displays in natural history museums; one situated Native dioramas near dinosaur bones, suggesting a shared extinction. Evoking artificiality with plastic blow-up animals and fake flora, her tableaux also recast some tropes of Native subjects with subtle humor. The artist’s poses in the photographs may also respond to 19th-century staged portraits of Native Americans. Generally colonizers made such portraits, which perpetuated stereotypes and mythologies of the West despite any intention to honor some sitters. Red Star inverts the colonial gaze by placing herself within her own work, often looking directly back into the camera with self-possession and strength.

1880 Crow Peace Delegation (2014) is the result of Red Star’s research into her Crow ancestors' fight for today’s land boundaries. Sourced from the National Anthropological Archives, this series of historical portraits has undergone both physical and conceptual alteration. In meticulously outlining the figures, faces, and clothing in red ink, Red Star evokes the drawing of borders and boundaries on maps. Around the subjects she has handwritten historical facts, quotes, and personal observations, reflecting her own position as a Crow woman. Red Star speaks about the occasional pressure she has felt to prove her Crow ancestry. Proving one’s “authenticity,” she says, can be a modern construction of identity. Red Star’s work acknowledges that identity goes beyond the surface that such ethnographic photographs often imply.

Let Them Have Their Voice (2016) is Red Star’s response to photographer Edward S. Curtis’ seminal 1908 book, The North American Indian. She alters Curtis’s famously controversial portraits of chiefs, scouts, and warriors, transforming the Native individuals to anonymous cut-outs. In the gallery, she fills the voids their silhouettes create with a sound piece that accompanies these works. The looping audio comprises wax-cylinder recordings of Crow singers performing traditional songs that Curtis recorded between 1907-1912. “I felt that was the best way to actually see them—by hearing them,” Red Star explains. Despite a drum and wind instrument, we can focus deeply on the singers’ solo performances through the static of the old recordings. Between songs, an archivist notes each sound clip’s accession number. The archivist’s voice is disconcerting, reminding us of the colonial framework. Yet here, in the context of her exhibition, Red Star reclaims these songs.

Apsáalooke Feminist (2016) extends the self-portraiture that Red Star explored a decade earlier in Four Seasons. In these works, she considers the future of her lineage, appearing alongside her daughter, Beatrice Red Star Fletcher. They wear their finest Apsáalooke (Crow) dresses and pose on a sofa within contemporary domestic space. Red Star alters the walls and carpets digitally with painterly zig-zags that accentuate the vibrant colors of traditional blankets, drawing our eyes to mother and daughter in the center of the frames. These images provide a space for contemplation of the matriarchal legacies of Crow culture. The two perform for the camera, sometimes mirroring each other’s body language, expressing shared pride, tradition, and vitality as Crow women.

Shelley Niro’s 1994 exhibition marks the last time a Native American artist’s solo exhibition filled Light Work’s gallery. While distinct in their voices and working years apart, Niro and Red Star share an inherently significant link. Niro’s work challenged assumptions about what defines cultural identity by unpacking stereotypes. Instead of giving a single definition of what it means to be a “First Nations woman,” Niro suggested, like Red Star, that identity is a fluid and complex lived experience, not an absolute.

Through her work, Red Star says she seeks to complete the missing pieces of the puzzle of her people’s history—a history that colonialism has unfortunately interrupted. “The stories have been scattered,” she says. Important for her Crow community, this re-gathering also helps to tell a more accurate story of America.

stand upon the ancestral lands of the