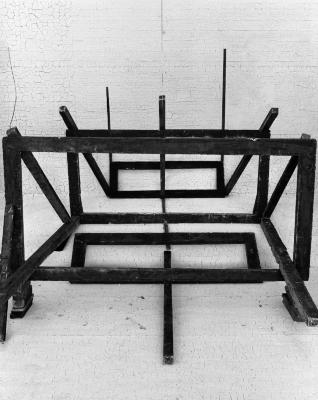 Rodrigo Valenzuela lives and works in Los Angeles, CA. He studied art history and photography at the University of Chile (2004), holds a BA in Philosophy from The Evergreen State College (2010), and an MFA from the University of Washington (2012). Recent residencies include Bemis Center for Contemporary Arts (Omaha, NE), Center for Photography (Woodstock, NY), Core Fellowship at the Museum of Fine Arts (Houston, TX), Light Work (Syracuse, NY), MacDowell Colony (Peterborough, NH), and Skowhegan School of Painting and Sculpture in Maine. Recent solo exhibitions include Future Ruins at Frye Art Museum (Seattle, WA, 2015), Galerie Lisa Kandlhofer (Vienna, Austria, 2018), Work in Its Place at Jordan Schnitzer Museum of Art (Eugene, OR, 2018), New Land at McColl Center (Charlotte, NC, 2017), American-Type at Orange County Museum (Santa Ana, CA, 2018), Labor Standardsat Portland Art Museum (Portland, OR, 2018), and Prole at Ulrich Museum of Art (Wichita, KS, 2016). Valenzuela is an assistant professor in the Department of Art, University of California at Los Angeles, and recipient of the 2017 Joan Mitchell Award for Painters and Sculptors. He participated in Light Work’s Artist-in-Residence Program in August 2017.

There are many ways to think about Rodrigo Valenzuela’s barricade series in his General Song exhibit. The one I want to explore has its source in a book that gave the show its title, Pablo Neruda's mid-20th century Canto General: Song of Americas. Containing 231 poems, the work is Borgesian in scope. Recall that mad poem written by a character in Jorge Luis Borges’ short story, “El Alepha”―mad because a vision that the Jewish Dutch philosopher Spinoza once described as sub specie aeternitatis inspired it―and you have a good of idea of the encyclopedic scale and density of Canto General. But a short passage in this work caught Valenzuela’s eye. Those familiar with his previous shows will not be surprised to learn that it concerns labor.

Stonemason of the defiant scaffold:

farmer trembling in the seed:

potter amid your spilled clay:

bring to the cup of this new life

all of your old buried sorrows

Though invisible, the “crushed fingers,” the “tears,” the “trembling,” are all part of the barricade series. These large-as-life photographs of planks of wood connecting with images of planks of wood, the warped sheet of corrugated metal falling out of an image of a warped sheet of corrugated metal, the folding chairs rising from the ground like acrobats. This work has a harshness that seems inhuman or even cruel, yet these are human-made materials. Nothing in the barricades is unfamiliar. It’s hard to live a single day without encountering these things: car tires, metal chains, concrete blocks, forklift pallets.

What connects General Song with Valenzuela’s other projects, particularly Future Ruins (2015) at Seattle’s Frye Art Museum, is both the theme of work and, more importantly, the amount of work that produced the images and sculptures. This great expenditure, I think, is the key to Valenzuela’s philosophy of labor, which is related to theories about work and money that Frederick Harry Pitts discusses in the chapter, “Money and Exchange Abstractions,” in his new book, Critiquing Capitalism Today. His thinking draws heavily on Alfred Sohn-Rethel’s obscure essay, “Intellectual and Manual Labour: Critique of Epistemology,” and is basically this: The essence of any kind of work that’s connected by the universal equivalent, money, to other forms of work that, as a social whole (or economy), are standardized by units of labor-time that measure the production of objects or services whose use values are sublated by their exchange value is abstract.

The net result? This completely reverses how we usually think of abstraction: In capitalism, labor occurs in the hands or the physical tasks that the body performs, not in the head. Hicks writes, “The abstraction from different concrete labours in the service of the equal, undifferentiated abstract labour of exchange is nothing other than a mental abstraction, yet originates from outside the mind in the actions of those involved in the process of production and exchange. Rather than the ‘exclusive property of mind’, then, abstraction ‘arises in commodity exchange.’”

To see what Hicks means, look at the compositions in Valenzuela’s barricade series. The materials are harsh and heavy, even worn, but through the artist’s hard work, they form patterns as abstract as any thought. The abstraction of the construction and warehouse materials in Barricade #4, for example, is radiant, with planks leaving the core of stacked concrete blocks and pallets like the rays of a sun or a brilliant thought. And is not work ultimately the transformation of a star’s light into tasks and objects? But for political reasons, rather than natural ones, the abstractions of labor have real consequences. If you cannot sell your labor to those who govern production, you will not eat or might end up on the street. As Hicks puts it, “life-circumstances really are dependent on the movement of economic quantities’. Value is a ‘real appearance’―a ‘constituted social nature.’”

In the movie Modern Times, another worker relieves Charlie Chaplin of repeatedly turning, with a pair of spanners, screws on metal plates that endlessly pass him on a conveyor belt. Afterward, while he jerk-walks to his break in the factory’s lunchroom; his hands can’t stop the motion of turning the screws. This twitching action of spanners and screws no longer there reveals the abstract actions of his work. Valenzuela’s genius is to transform such abstract actions, which various forms of labor impose at construction sites or warehouses (Future Ruins, General Song), or a hotel (Maria TV), into objects of art.

Charles Tonderai Mudede is a Zimbabwean-born cultural critic, urbanist, filmmaker, writer, and editor. He lives in Seattle and lectures at Cornish College of the Arts. www.thestranger.com/authors/237/charles-mudede

Rodrigo Valenzuela lives in Los Angeles, CA, and completed his residency at Light Work in August, 2017.

Rodrigo Valenzuela’s work in photography, video, and installation boldly addresses themes of labor, power, and representation. For a Chilean artist living in America, who is making his work at a moment when the
45th President of the United States continues pressing for a border wall between the U.S. and Mexico, the underlying narrative of Valenzuela’s art—of immigration and the struggles of the working class—is as charged as ever.

The title of Valenzuela’s Light Work exhibition, American Type, refers to a 1955 essay in which art critic Clement Greenberg frames the work of abstract expressionist painters such as Pollock, Kline, Motherwell, and Rothko as distinctly American. Green- berg proposed that post-war American paint- ing was more about the act of painting itself than about any complex idea of representation. Valenzuela finds it interesting to challenge this concept and, as he puts it, to contemplate “how much the absence of content has become the American gold.” He doesn’t argue that abstraction is necessarily without subject or emotion, but Valenzuela questions Greenberg and art world elitism more generally by making his own subversive abstractions that he imbues with social-political meaning.

The photographs of Lewis Baltz, prominent in the New Topographics movement of the 1970s, also inspired Valenzuela. He was particularly intrigued by Baltz’s images, which felt closer to abstract expressionism and looked beyond the role of a camera as simply a tool for documentation. “How
do we understand photography as art,” Valenzuela asks, “when the photographer and the camera are always so attached to reality, and painting is so attached to an impulse or a materiality?” Valenzuela values the approach of moving between media as a way to explore the visual language of each medium and to see if an idea sticks. With his current work, he attempts to think through the constraints of a camera and a lens, using the space of the studio to explore the possibilities of both gestures and subjects.

From a distance, Valenzuela’s monochromatic works appear like at charcoal drawings, and only upon closer inspection can one notice the materials that ll the frame of the photograph and the confounding hints of a three-dimensional studio space. His photographs have an immediate and strong architectural presence on the wall, reminiscent of some earlier works in which he considered what it means to build a home. Valenzuela sees these studio fabrications and their shapes as a direct reference to the brush strokes of painting. Certainly, they call to mind the conversations about painting’s ability to create enveloping in nite space through mark making, and the tension between the surface of a work and the illusion of depth on the picture plane.

Valenzuela’s process of creating sculptural forms in a studio and then photographing them with a large format camera—similar to that of Baltz—collapses these spaces into flattened abstract gestures as individual photographic prints. The process is more arduous than it may at first appear. For the prints in American Type, he casts pieces of wood in plaster and then covers them in charcoal dust, before using them in the studio. The structures that he builds with these materials, once photographed, are rendered as dark gestures on the surface of the prints, balanced by thin delicately painted metal wires in a few of the works.

Perhaps most of all, Valenzuela’s approach to representation in his work draws our attention to the extensive labor of his artistic process. He has honed his craft with an intensity that is immediately apparent while observing him work. Every aspect of his making shows a trace of his own labor, from the building of studio assemblages, to the photographic steps that lead to the nal prints, and the wooden frames that the

mounted work lives within—cut, assembled, and painted by his hand. Labor is inherent in the making of all art, but for Valenzuela it becomes a central subject.

A er leaving Chile for the U.S. in 2005, Valenzuela found work in construction. For a number of years he worked odd jobs through labor agencies, becoming close with many of the other laborers who, like him, had come from Latin America. When he pursued a graduate degree in art, he returned to work- ing with many of these friends for his thesis project. His 2013 lm, Diamond Box, for example, allowed him to tell some of his own story through those of others. While he leaves some room for optimism, Valenzuela says his works “re ect the environment of capital oppression that one must endure.” His films and photographs are quiet reflections of both hope and pain.

Valenzuela treats the studio as a place to be memorialized anew through photography. His studio photographs deconstruct principles of aesthetics and art history, but more powerfully they allude to the stories of today’s working class struggles (including those of artists such as himself). America is deeply divided and growing inequality and oppression are symptoms of that divide. With his work, Valenzuela considers the relationship that power has with the capitalistic systems that create marginalized communities as well as the fading notion of the American Dream. We’re confronted with the question, who is allowed to dream?