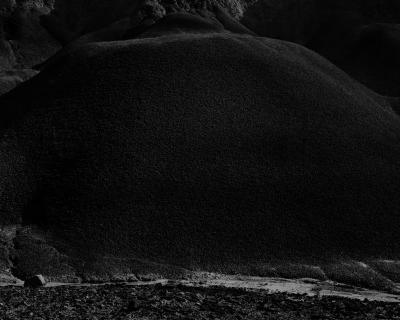 Mark McKnight (b. Los Angeles, CA) is an artist whose work has been exhibited internationally. Recent solo exhibitions include if water forgets how to play mirror (Queens, Los Angeles, 2018) and Turn Into (James Harris, Seattle, 2018). His work has been written about in Aperture Online, Photograph Magazine, and was recently discussed on The Magic Hour: Conversations on Photography. His photographs have been included in several group exhibitions and catalogs of photography including 20/20 Vision: An International Photography Biennial and Defining Photographs & Radical Experiments in Inland Southern California, 1950 - Present (California Museum of Photography, Riverside, 2019). In 2017 he published NOUNS, a collection of photographs that debuted at the Los Angeles Art Book Fair. In 2009, Mark traveled to Finland on a Fulbright Scholarship. In 2017, he was an artist in residence at Storm King Art Center. McKnight is the winner of the 2019 Aperture Portfolio Prize and was selected as a 2019 Light Work A.I.R. In 2020 his work will be the subject of a solo exhibition at Klaus von Nichtsaggend, New York and his first monograph, Heaven is a Prison, will be published by Loose Joints. Mark splits his time between Los Angeles and Tucson, where he is currently a Visiting Assistant Professor of Photography at the University of Arizona.

In Mark McKnight’s Eros and Erosion, an oily human back gleams, illuminated by sunlight. A scar is visible on the back’s top-right corner, and patches of discolored skin along the spine’s curvature have stretched and faded over the years. Sun-darkened, creased by strained posture, the body’s skin shows age. Beneath the sunlight’s high contrast, the skin resembles leather, worn and torn with traces of lived experience and the knowledge that a body holds or knows.

McKnight’s work has changed significantly since I first encountered his zine NOUNS in 2017. His current photographs feel physically and emotionally heavier. His new body of work, Decreation, foregoes his previous tendencies toward capturing weightless, ephemeral moments for a depiction of figures and land that is significantly more weighted, affective, and symbolic. The new images are hard to write about. Their subjects—whether the figure whose gleaming back resembles craters of the moon, a brick wall collapsed under immense weight, or a dark landscape—feel secondary to the uncanny eerieness that the photographs evoke. Decreation does not depict specific people, places, or things. The photographs do not seek to portray individual portraits or landscape phenomena—although naturally as photographs they do, to some extent—but McKnight’s approach depersonalizes their content. Instead of rendering and defining their subjects in particularity, the photographs flow with a haunting spirit. They remind me of the German expression Es spukt hier, which literally translates as “it haunts here.” The phrase has no subject and does not define what the “it” that “haunts” is. Rather, as theologian Rudolf Otto describes in The Idea of the Holy (1923), the phrase is “simply the pure expression of the emotion of ‘eeriness’ or ‘uncanniness’ itself, when just on the point of detaching and disengaging from itself a first vaguely intimated idea of a numinous something, an entity from beyond the borders of ‘natural’ experience.”

McKnight’s title, Decreation, carries numinous meaning. Taken from the work of 20th-century French mystic and political activist Simone Weil, the term refers to a means for getting the self out of the way so as to come closer to God. In Gravity and Grace (1987 edition), she writes, “We possess nothing in the world—a mere chance can strip us of everything—except the power to say ‘I.’ That is what we have to give to God—in other words, to destroy.” Within the framework of decreation, Weil makes a point that withdrawal, renunciation, and the undoing of the self allow one to start to fully experience God’s love and participate in “the creation of the world” as a “co-creator.” Weil attempted all her life to get out of the way and be with God. But as Anne Carson writes in her 2002 essay on Sappho, Marguerite Porete, and Simone Weil, Weil was caught in a “tricky spiritual fact, viz. that [she could not] go toward God in love without bringing [herself] along.” At the end of one section of Gravity and Grace, Weil melancholically concludes, “If only I could see a landscape as it is when I am not there. But when I am in any place I disturb the silence of heaven by the beating of my heart.”

Continuing with Weil’s notion of decreation, we could understand the photographs in McKnight’s series as representing steps in the journey toward becoming closer to God. In a romantic tradition, the images show McKnight using the camera as a tool to develop his own understanding of a spiritual current in the world. McKnight’s acts of creation and decreation attempt to undo the familiar—a human back, a pile of bricks, a fly—to allow a spiritual current in, and to render the familiar and worldly into the strange, uncanny, and otherworldly. In other photographs from the series, bodies morph and blend into the landscape, almost becoming non-human. Perhaps we can read the sequence in the previous pages as one soul’s transmigration from birth as a lone, dormant figure, cradled by volcanic rock, progressing into its aged and worn body, further on to its death, and then bursting forth into the body of a fly, whose quick twenty-eight-day life span has further transmigrated into a rolling landscape of a dark unknown. As McKnight attempts to allow God in, such energy and tension manifests as sheer uncanniness.