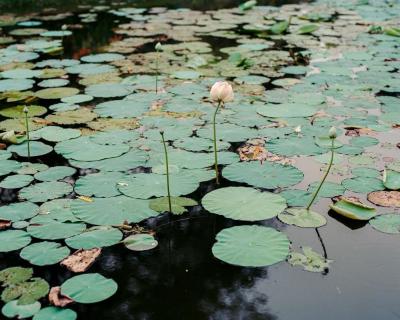 Arpita Shah (b. 1983, Ahmedabad, India) is a photographic artist and educator based in Edinburgh, Scotland. She works between photography and film, exploring the intersections of culture and identity. Shah spent the earlier part of her life living between India, Ireland and the Middle East before settling in the UK. This migratory experience is reflected in her practice, which often focuses on the notion of home, belonging and shifting cultural identities. Shah’s work tends to draw from Asian and Eastern mythology, using it both visually and conceptually to explore issues of cultural displacement in the Asian Diaspora. Shah received her BA in Photography & Film from Napier University in Edinburgh. Her work has been exhibited internationally, including at the Detroit Center of Contemporary Photography (2013); Tramway in Glasgow (2014); Focus Festival in Mumbai, India (2015); Chobi Mela IX in Dhaka, Bangladesh (2017); Autograph APB in London (2018) and Street Level Photoworks in Glasgow (2019). She is the recipient of the 2019 Light Work + Autograph ABP Artist-in-Residence programme and is currently working on a new commission supported by GRAIN Projects across Birmingham and the West Midlands.

we think back through our mothers

The series Nalini explores diaspora across generations of women born in India and East Africa. Arpita Shah focuses on her own family, her mother, grandmother, and herself, to ponder stories of feminine resilience. In homage to her maternal ancestors, the series is named after Shah’s grandmother.

Born in Ahmedabad, Gujarat, in 1983, Shah grew up in Saudi Arabia, moving to the UK and settling in Scotland in 2002. Partly autobiographical, Nalini invites us to consider how diasporic uprooting shapes identities. Evocative, it lingers on the social, domestic, and familial worlds that the three women created and inhabited. Carefully choreographed, the series occasions spaces for intimate encounters and recollections: dreams and memories are triggered but also lost to us.

A popular female name, Nalini (Sanskrit for lotus) connotes the gendered virtues of purity, fertility, and regeneration in Hinduism. Shah photographs the lotus with other plants and flowers alongside the three women to consider the experiences of dislocation and growing up far from home, from youth to maturity to old age. Rootedness becomes a form of longing and connection, planting an art form that brings one closer to a foreign land.

Shah’s matrilineal ancestors considered gardening a creative way to nurture the sense for home as well as provide a break from domestic routine. In the evening, Shah’s great-grandmother wandered on her own beyond the garden for an hour. Nobody knew where she would go, which flowers she might pick, touch, or smell.

Kenya, imagined as a Land of Plenty, became a novel home for the household, one that promised secure and long-term commercial fortunes. In Nairobi, the family set up a dairy farm named after Krishna, the blue god Hindus revere, especially in Gujarat. An archival photograph from 1938 pictures the Krishna Dairy Depot: male staff members pose by the shiny, motorized vehicles and large milk distributors. Women and children cherish tales of baby Krishna’s love for milk and butter, his pranks to break milkmaids’ pitchers and steal the mythical liquid. Krishna’s figure, with pointy chin and sweet small smile, often appears sleeping in his Sheba boat afloat the ocean waves. Other tales recount struggles over the control of milk, as in the myth about the churning of the ocean and the fight between the Devas and the Asuras, the Gods and the Demons. Milk of the primal ocean churns into butter, shaping the elements of creation and then the world. The natural and divine substance easily becomes a substitute for a mother’s milk. Milk turns into butter and into flowers. Krishna Dairy Depot workers filled empty milk cans with phools (flowers), offering them to Shah’s great-grandmother, who was fair as milk, like a queen.

At the start of World War II, Shah’s maternal ancestors left Kenya and returned to Gujarat. This meant renouncing a lavish lifestyle and losing an extra-mural freedom. Back in Gujarat, they threw out the colorful frocks and sumptuous sartorial accessories of Nairobi to make room for dreary and monochrome chanya choris. Feminine propriety became the norm and Swahili a secret language, a ruse in the streets. “I wish we’d never left Nairobi, nothing but sadness in India,” recounts Nalini.

Shah magnifies and closes in on tactile and olfactory clues, luring the viewer closer: a mass of raven black hair, the moist wrinkles of an old woman emerging from a bathtub, creases of textile and skin, the petals of a large lotus wrapped tightly around each other. Sensuous and slippery, the images suggest that to fix a woman’s life in a single stage—literally through the frame of the camera—is fruitless.

Nalini perhaps offers homage to ancestral memories in the form of puja. In one image, deep magenta bougainvillea flowers adorn an old faded passport. As homage, a prayer is both request and testimony. Photographs, footprints, and names written in books abound in Indian homes, and are conserved as durable and tactile means to re-connect with ancestors. Notwithstanding the advent of digital imagery, printed photographs remain very popular. Family members obtain pictures of their elders before they pass away, framing them for domestic altars that they beautify with locally sourced flower garlands, particularly marigold and jasmine. Nalini stages diasporic longing and the longing for diaspora. Shah alludes to fertility, birth, and death through reference to the body, textures, and colors. Pressing and folding flowers and textiles evoke quotidian customs carried across time and space: hand-gathering the patli of a sari into even pleats below a woman’s navel creates a graceful, decorative effect like the petals of a lotus flower.

One of Shah’s photos freezes a folded gold and silver threaded brocade that her maternal ancestors wrapped around their bodies. Time, she appears to show us, coils, ravels, and unravels with Nalini.

Emilia Terracciano is writer and lecturer at the University of Manchester in the UK.

Arpita Shah lives in Edinburgh, Scotland, and completed her residency at Light Work in September 2019.