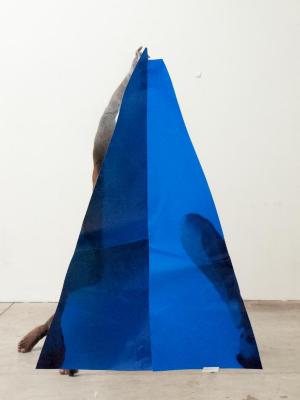 Paul Mpagi Sepuya (b. 1982, San Bernardino, CA) is a Los Angeles-based artist working in photography. His work focuses on the production of portraiture in the artist’s studio as a site of homoerotic social relations, and the potential of blackness in the space of the “dark room.” His work emerged within the queer zine scene of the 2000s, and was most recently shown in “Being: New Photography 2018” at the Museum of Modern Art. His work is in the collections of The Museum of Modern Art, the Whitney and Guggenheim Museums, The Studio Museum in Harlem and MOCA Los Angeles, among others. Sepia received a BFA from NYU Tisch School of the Arts (2004) and an MFA from UCLA (2016), and is currently visiting artist faculty at California Institute of the Arts.

There’s never one right spot to rest your gaze in a Paul Mpagi Sepuya photograph. Looking becomes a sort of wading, as you move through tableaux vivants of draped velvet, reaching arms, and scraps of other photos. But somehow all this depth presses together the instant Sepuya clicks the shutter, bringing the textured relations of his friends, lovers, and muses up close and true for one hot moment. Sometimes a studio mirror he uses to make work reflects back the camera and this instant of making—reminding you of what it’s like to have your picture made, what it’s like to tense up or wind down before a camera, because, for Sepuya, portraiture is more about relationship than anything else.

He starts by inverting the formal, prescriptive studio photograph—allowing himself and his subjects to be honest and playful together, to come to a pose that feels right. Darkroom Mirror (_2060999) (2017) is a fleeting tangle of black and brown bodies. Though toned, they hold each other together gently, hands sliding off another’s abdomen or thigh. Their bodies glow in a raking warmth that hangs off some haze in the air. It’s the mirror, set with dried water droplets and smudged fingerprints, imperfections that remind you that photography—in its posing, shooting, printing—is at its core a human act. But even in its intimacy, Darkroom Mirror (_2060999) still feels guarded. Sepuya reaches over to take the picture, the slant of his hand revealing the eyelid but blocking the pupil of someone’s sidelong glance. And even in its intimacy, the photo is never risqué—when you notice the nipple and penis, the feeling is queer but comfortable.

In contrast, not much happens at first in Darkroom (_2010616) (2017). A cascading velvet drape fills most of the picture, held up by two black hands that coincidentally gesture a camera frame. The photograph’s focus is this napped fabric, rubbed and fading from full burgundy to translucent red at the velvet’s edge. There, loose strands fray out of focus, reminiscent of hair tingling on a body. With its red color—of the darkroom, of the horizon just after sunset—and shadowed folds that echo musculature, the drape becomes a stand-in for the body, a study both in form and sensuality. Bodies are on the periphery in Darkroom (_2010616) though, svelte and in repose. Thighs and calves form a slightly askew archway—I think of Peter Hujar’s photograph of a man with crossed legs, lying down blissfully on the Christopher Street Pier. Or of Alvin Baltrop’s photographs of gay men slipping between the piers’ crumbling warehouse walls, just as a spot of sunlight catches them. Sepuya follows these photographers in rendering moments of queer life that first are wary, tender, then brash.

At 10 by 13 inches, both Darkroom Mirror (_2060999) and Darkroom (_2010616) are fairly small. Their size heightens the charged energy of certain details and textures; you’d have to get close or pick up the photos to notice everything. Sepuya titles his work plainly too, stating where he made the photograph and the image file number. Some photos he considers “Studies.” There’s little drama in these classified titles, but maybe these photographs are not so much about being careful, final. Maybe they’re about getting to know a body through photographing it repeatedly, until the card is full. We don’t get to see the photos that come before and after, but that doesn’t matter. Repetition is what makes a black queerness everyday, then beautiful.

Sepuya’s repetitions also include photographing cut and assembled fragments of past photos on his studio mirror, leaving you to puzzle over the weave of the whole thing. Mirror Study (0X5A0487)’s reflected tripod legs make the subject seem like one photographed sculpture, until you see the layered strips of pointing, grasping arms. Sepuya’s arm dangles a picture fragment in the foreground, its shadow trailing into the translucent wrinkles of sheer fabric on the fragment itself. Hands claw at a t-shirt and fingers gently pass a scrap of paper. Mirror Study (0X5A0487) is a large photograph about touch, both raw and artificial, that, like light itself, filters through layers.

At Light Work, Sepuya began making torn collages from prints on regular letter-size paper. Some are just rearranged slivers of self-portraits, with empty zips that expand a body and expose the tears’ soft, uneven edges. The blurry, zoomed-in source imagery and saturated printing give the collages an additional felt immediacy, one that’s long been brimming in his work. It’s the immediacy of rushing to capture some memory, so that you can circle back later to uncover all the facets of those lingering bodies.

Alex Jen is a writer and curator based in Chicago, IL.