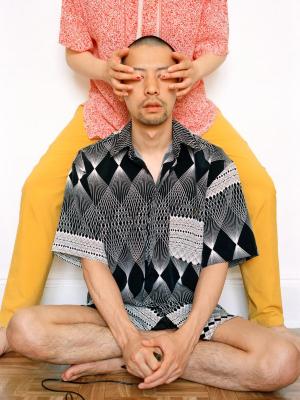 Artists often make decisions that change both their lives and their art in fundamental ways. When Pixy left China in 2005 to do her graduate studies in the United States, she did not realize how profound those changes would be.

Pixy grew up in Shanghai. Eager to pursue her interest in photography, she applied to and was accepted in the MFA Photography program at the University of Memphis in Memphis, Tennessee—about as far away, in all ways, from home as imaginable. The move forced her to adapt quickly, if her new life were to be successful. Being strong willed and goal oriented, she succeeded, after an initial adjustment period. She also found her photographic “voice” when she met Moro, an undergraduate student studying double bass in Jazz performance, five years younger. She thought he was cute and she asked him if she could photograph him. This marked the beginning of their collaborative series of photographs that have taken them from Tennessee to Brooklyn, where still they are living. Nine years later, the collaboration continues.

Pixy’s photographs start with the two of them creating a performance based on an idea she has worked out in her mind and discussed with Moro. It is acted out by them and subsequently photographed. This process is self-examination of their lives—less about who they are individually and more about what each brings to the photograph. Their collaboration focuses on their relationship—she, being older and more experienced, is in charge and he acts in response to her. At the center of her work is the exploration of traditional gender roles. She reverses them—who is in control and dominates—in their case, the female leads. Far from being a feminine manifesto, her pictures are witty and slightly subversive. They question established traditions by portraying Moro as the willingly manipulated male while she makes the decisions. It is refreshing to see the many ways she turns things upside down, making us think about what we so easily accept as a given. Moro wears a dress, why not? Or in another picture, he is nude and she is not. Anything wrong with that? With a twinkle in her eye, she slyly changes the role assignments in order to challenge traditional thinking.

When I first met Pixy, I thought for a moment that she might be somewhat naive, but after talking to her in more depth I quickly realized she is strong, and single-minded, like many Chinese women, in her dedication to her photography. Her pictures are bright and beautiful, on the surface uncomplicated and easily accessible. Looking closer, it becomes evident that they are well thought out and deliberate. She gently prods to get our attention and uses nudity, intimate exchanges, anything really, to shift our focus to her exploration of gender roles.

Like all things worthwhile, with passing time, her work has shifted ever so gradually. She continues to photograph scenarios that address her relationship with Moro, her partner in life and in her art. Their lives and art are intertwined, therefore if one shifts so does the other. Their collaborations have become more fluid. Now she no longer needs to be in control. She relies more on Moro, which creates a new balance. Their most recent pictures in this series are about intimacy in their relationship. Again she challenges us—Spit, 2014 is completely natural, yet we want to look away and consider it slightly revolting. The picture entices, as it is also beautiful and sweet. She says the secret to their collaboration is the fun they experience while they create the images.

Pixy’s work/career has flourished in recent years. She credits residencies she has been awarded with providing ideal surroundings for her to thrive. At Light Work she had access to their excellent technical facilities, broadening her knowledge of printing and scanning. The tranquil surroundings allowed her to explore her work more fully and her creativity expanded. While there, she and Moro worked on a video, now being edited. Both Moro and Pixy act and Moro will play a female role. She says it will be a departure, as it will explore female identity, fantasy and gender fluidity. They will add music by Pimo, the name of their artist band. The converted schoolhouse in which they lived during her Light Work residency inspired a departure. She says the video is more playful and they act out fantasies. I am curious and, no doubt, there will be a happy surprise in store for me.

Elisabeth Biondi is a Visual Editor who curates exhibitions, teaches, writes about photography, and she advises photographers.www.biondifoto.com