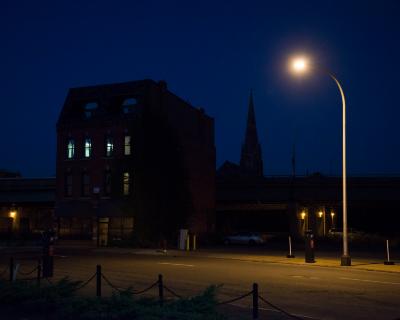 For a more recent CV or bio please visit the artist's website, http://www.nicolalocalzo.com/site/about/

Nicola Lo Calzo, an Italian photographer born in Torino in 1979, lives and works in Paris. After studying landscape architecture, he shifted to photography. His photographic practice and research break down the barriers between art and documentary photography. He is attentive to questions surrounding minorities and questions of identity. Imbued with profound empathy, Nicola Lo Calzo’s photographs show the ways in which minority groups interact with their environment, the ways in which they develop strategies of survival and resistance. For nearly five years, he is engaged in a long-range photographic research project on the memories of the slave trade and slavery. This on-going ambitious project, entitled Cham, has been elaborated into different stages in Africa, the Caribbean and America.

In parts of the American South, where some communities observe Robert E. Lee Day in lieu of Martin Luther King Jr. Day, and refer only half-winkingly to the Civil War as “the War of Northern Aggression,” the antebellum period is no vestige or history lesson. It remains deeply internalized beneath the surface of modern life and many Southerners readily say it defines them. To be in the South is to mix with ghosts, who can feel as alive as the living.

In 2014, the photographer Nicola Lo Calzo, Italian-born and Paris-based, traveled to Louisiana and Mississippi for his ongoing series, Cham, which traces the legacy and enduring impact of colonialism and the slave trade across the African and Afro-Caribbean diaspora. Sections of the project, which Lo Calzo began in 2010, have brought him to Benin and Ghana in West Africa, Guadeloupe and Suriname, Cuba, and Haiti. The U.S. segment is called Casta, the Creole word for “caste.” Its focus is the region’s three most established communities: Black, Creole, and White. Louisiana and Mississippi share a common history: French colonization, slavery and plantation economies, confederate allegiances, reconstruction, segregation, economic decline, and a wounded sense of pride. They rub up against each other but, as Lo Calzo explains, physical proximity does not translate to interaction. Those who call themselves Black Indians, for example, see themselves as descendants of Maroon slaves and Amerindian resistance fighters, not plantation slaves. White families in Natchez see themselves as heirs of a glorious past linked to cotton, trivializing their involvement in slavery. Creoles, descendants of “free people of color” and inheritors of the oldest black bourgeoisie in the U.S., often ignore their slave forebears.

Lo Calzo’s photography is not expressly journalistic but borrows from that discipline’s rigor. Realism and surrealism collide, as in images of a line of battle reenactors in full dress on the side of paved highway, or of young black men applying blackface, at once clownish and menacing, in a Hilton ballroom. They are portraiture too, even when absent of bodies: unchanged plantation house dining rooms and remnants of slave cabins, a Confederate-era Mississippi flag slumped over a chair, low-slung walls in Tremé with spray-painted depictions of MLK and Malcolm X. Lo Calzo is interested in a portrait of the United States, but also memory, and how it slips into every corner and tints every surface.

Lo Calzo’s photographs are not misery tourism, nor are they directly about suffering, yet a trauma haunts them. It manifests in unexpected places, carried and passed down like an inheritance. They conjure the dusty romanticism of Louisiana’s Gothic corners, and Lo Calzo’s sitters, especially the white ones, can appear embalmed within it, choked by a vaporous gentility that no longer exists, perhaps even for them. In Mississippi, Lo Calzo visits the volunteer performers of the Natchez tableaux. He captures a society matron and her granddaughters swimming in the tulle of their ball gowns, sitting in the period rooms of their historic family homes. They perform their ancestors’ upright decorum, but their faces are slack, almost stricken.

Much of what Lo Calzo shoots is in some way obfuscated. War reenactors stand inside a cloud of gunsmoke. Shot through a thatch of branches, the steamboat Creole Queen lumbers through a thick mist. In a 19th century portrait of a free woman of color, the sitter stares back at us, the lights of a reflected chandelier obscuring her eyes without diminishing their intensity. This image is in conversation with a dual portrait of Diane H. Destrehan, a descendant of the free woman of color, Catarina Destrehan. The latter appears first standing inside, her back flush against the camera, and then outside, turned slightly but still away, and wearing a headwrap. Her face remains a mystery. Only in the second image does the hint of her profile come into view, a never-resolved glint of clarity.

We refer to slavery as “America’s original sin.” Such Biblical heavy-handedness makes it no less true; slavery’s echoes linger and reverberate across centuries like a creation myth. Its shape mutates, but it has always been with us: Jim Crow laws, segregation, disenfranchisement, red-lining, mass incarceration, police brutality, municipal water crises. It becomes smoother, more seamless, more elegantly incorporated into the weft of the social fabric. Lo Calzo’s images don’t exorcise these ghosts, nor is that his intention. He presents them back to us, a latter-day de Tocqueville in America, with new eyes.

Nicola Lo Calzo lives in Paris, France, and completed his residency at Light Work in September, 2017.

Max Lakin is a writer and journalist in New York City. www.maxlakin.com

In September of 2017, Nicola Lo Calzo traveled from Paris to Syracuse to participate in Light Work’s Artist-in-Residence Program. For several years he has engaged in a photographic project about memories of the slave trade and documented its descendants in the African diaspora in the Americas (Cuba, Haiti, other parts of the Caribbean) and West Africa.  He spent his month’s residency here exploring Central New York and photographing the rich local history of the Underground Railroad (UGRR).

Lo Calzo is not an American. His own background includes Southern Italy, Greece and the Maghreb and he splits his time living in Paris, West Africa, and the Caribbean. His position as an outsider allowed him a degree of detachment as he documented what he calls “traces of history.” His project includes photographs of historical artifacts, monuments, scenes of ordinary life in this area, portraits of locals whom he befriended, and gift shop souvenirs. Lo Calzo says he’s interested in the ways that “memory is made by layers, strata, and juxtapositions between past and present, subject and context.” From his residency photographs and research, an undeniable and complex narrative emerges about Central New York and how its multiple, sometimes competing communities have preserved or repressed history.

Lo Calzo took his exhibition title, Bundles of Wood, from a list of surviving secret code words that the Harriet Tubman Society published. The UGRR appropriated the vocabularies of both America’s new railroad system and Bible stories, especially Exodus, the story of the Israelites’ enslavement. So a conductor was a person who directly transported fugitive slaves, a station was a refuge and hiding place, the Promised Land was Canada, and Moses was Harriet Tubman. “Bundles of wood” was code for fugitive slaves whose arrival is imminent.

Lo Calzo’s photographs of the Gerrit Smith Estate in Peterboro depict the bucolic estate of a wealthy and renowned mid-19th century white abolitionist and political activist. Smith’s home, barn, and out buildings comprised an UGRR station, and today are a carefully maintained National Historic Landmark. In contrast, the home of Rev. Jermain Wesley Loguen, African American abolitionist and freed slave, was razed to make room for a Rite Aid drugstore. While Lo Calzo was photographing the Loguen site, a man approached him and rolled up his sleeve, inviting Lo Calzo to photograph his tattoo of a supplicant slave in chains. This strange coincidence or gift exemplifies Lo Calzo’s patient search for evidence of larger truth buried in daily life. This neighborhood is part of the old 15th ward, a tight knit and largely African American community that 1960s Urban Renewal projects and inner city highway construction destroyed, first by a campaign to label it a “slum,” rendering it unworthy of salvage, and then by physical destruction of its buildings and mass displacement of its residents. Lo Calzo’s image reveals and encapsulates such decisions to value and memorialize white participation in the UGRR, meanwhile actively excising sites of black history that would embody memory of that community’s own agency and participation.

Lo Calzo has chosen work that involves complicated questions of race, representation, and absence. He asks, “How is it possible that the world organized the social, political, and moral consensus around the slave trade for four centuries, and how is it possible to erase the tragedy from the collective memory of Western countries and even from textbooks?” As the artist moved through this community with his camera, he certainly documented well-known but often hidden evidence of racial bias and the forces that still enable it.

In Bundles of Wood, Lo Calzo’s captions provide the real content and historical context for each photograph. Swamp near Auburn, Finger Lakes region is a landscape image that he made near the home of Harriet Tubman. Swamps and waterways played a significant role in the UGRR because slave catchers hunted down fugitive slaves with dogs. Moving from dry land to water threw hounds off the scent, allowing fugitives to escape. Harriet Tubman used the old spiritual, Wade in the Water, to warn fugitives to get off trails on dry land and travel by water. Many of the old slave spirituals—also called map songs—had directions coded in the lyrics. Wade in the Water contains the line, “God’s gonna trouble the water,” both predicting the coming Civil War and providing the community with a testimony of hope and encouragement to endure their suffering.

The history of photography and emancipation coincide in time and importance. Orator, writer, and former slave Frederick Douglass recognized photography’s power to manage public perception and himself posed for more than 160 portraits. Lo Calzo has photographed the only known daguerreotype of the Abolitionist Convention, held in Cazenovia in 1850, and includes it here.  From the center of this blurred image, Douglass stares directly into the lens with quiet dignity. Nicola Lo Calzo shares Douglass’ conviction about photography’s power both to distort and reveal reality.